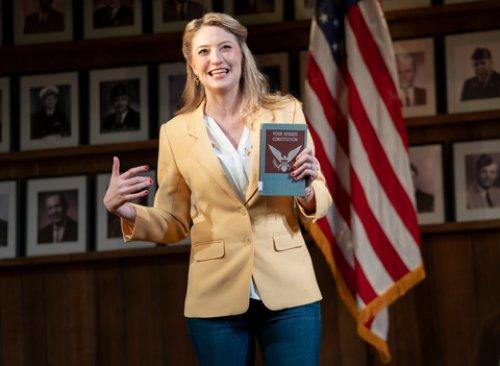 Heidi Schreck in a scene from “What the Constitution Means to Me” (Photo credit: Joan Marcus)

“I know some of you think I’ve gone off on a tangent, but I promise you I haven’t,” says Heidi Schreck, midway through What the Constitution Means to Me, a play that she wrote and in which she currently stars on Broadway. “In spite of what some people think,” she adds, “this show is quite carefully constructed.”

She’s not kidding. In fact, those very lines are not mere ad libs but have been carefully woven into Schreck’s text.

The premise of the show (directed by Oliver Butler) is that the 2019 Schreck has decided to recreate one of the many presentations she participated in at American Legion halls around the country, back when she was a 15-year-old high-schooler from Wenatchee, Washington. These presentations were apparently oration/debate hybrids. They were vigorous exercises—and lucrative ones. Schreck was able to pay fully for her college education with prize money from these competitions, which centered on the content and implications of the U.S. Constitution and its amendments. Back in the day, young Heidi was a pro-Constitution “zealot.”

For anyone who ever participated in speech and debate tournaments as a young person, this play will strike familiar chords. It takes place in one of the Legion halls at which young Heidi competed. Scenic designer Rachel Hauck’s choice of wood-paneled walls, plastered with photos of Legionnaires, evokes perfectly the time, place and cultural idiosyncrasies of such contests. 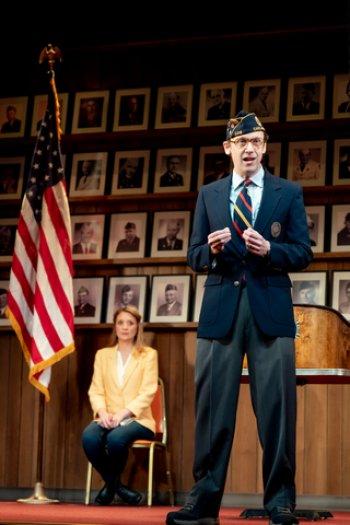 Heidi Schreck and Mike Iveson in a scene from “What the Constitution Means to Me” (Photo credit: Joan Marcus)

Intruding on Schreck’s trek down memory lane is, well, everything that she has learned in the intervening years—about politics, her family history and herself. Her adult self is appalled by the ways in which her beloved document has failed her, her forebears and all of America. While some of its amendments have opened up society in positive ways (abolition of slavery, most obviously), the document has not, Schreck asserts, protected women from violence, and it has not fully ensured their control over their own reproductive systems. Gradually, the whole conceit of the competition breaks down onstage as the mature Heidi opens up personally about how the Constitution has disappointed her.

Schreck maintains control not only on the page but also on the stage. She modulates her performance with great nuance. When things get too heavy or disturbing—as when she talks at length about horrific domestic abuse, both in and out of her own family—she will introduce a bit of comedic leavening. Parts of the show are quite funny. Lighting designer Jen Schriever aids Schreck throughout by ever-so-subtly adjusting the level of brightness onstage.

Supporting Schreck throughout the 110-minute show is Mike Iveson, who portrays the moderator of the contest—a character based on a real-life Legionnaire. Iveson’s character is in part a kind of comic foil for both the younger and the older Heidi. He’s partly officious, partly sympathetic and fully nerdy. Costume designer Michael Krass has decked him out in a cheap-looking blazer; a tie that, if it isn’t a clip-on, might as well be; and dark slacks with white socks. Eventually, Iveson—like Schreck—breaks character in order to let us know something about who he really is. 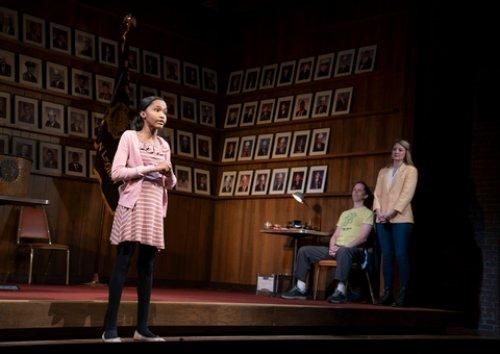 Rosdely Ciprian, Mike Iveson and Heidi Schreck in a scene from “What the Constitution Means to Me” (Photo credit: Joan Marcus)

During the course of the show, sound designer Sinan Refik Zafar provides recorded voices from Supreme Court hearings on important constitutional cases involving birth control and police protection, as well as some brief remarks from Justice Ruth Bader Ginsburg. All of this opens further the scope of the play.

Toward the end of the evening, the adult Heidi participates in a new style of debate opposite a young high school student from 2019. Rosdely Ciprian and Thursday Williams alternate in this role, with Ciprian appearing in the performance under review. She gave an appealing performance, but she tended to speak her lines extremely fast. In stage directions from her script, Schreck discusses this rapid-fire approach, which reflects an eager young debater’s tendency to overflow with enthusiasm. But maybe Ciprian should slow things down just a tad, so that we hear every word.

This final sequence calls on the debaters to argue the question of whether, in light of all its inadequacies, the Constitution should be abolished altogether. An audience member is called upon to proclaim the winner (at the performance under review, the decision was in favor of abolition). This moment is somehow a little anticlimactic in light of all the engaging and thoughtful content preceding it. Nonetheless, What the Constitution Means to Me is a must-see, especially considering everything the Constitution means to all of us at this particular stage of the American experiment.

What the Constitution Means to Me (extended through August 24, 2019)

Running time: 110 minutes with no intermission.