Lisa Dwan in a scene from Beckett’s “Not I” (Photo credit: Sky Arts/Justin Downing)

Irish actress Lisa Dwan first performed this program of three Samuel Beckett plays in 2014 at the Royal Court Theatre in London.  Critically acclaimed, the production then transferred to London’s West End, and then went on a worldwide tour.

This brief New York City run of Beckett Trilogy: Not I /Footfalls/Rockaby is reportedly its conclusion and coincides with Beckett’s 110th birthday.  The Nobel Laureate for Drama died in 1989 at the age of 83.

Ms. Dwan has been heralded as the successor to the late actress Billie Whitelaw as the foremost female interpreter of Beckett’s work.  Seeing her perform in these three plays proves that that soubriquet is justified.

Her playing three diverse characters in succession is a spellbinding feat.  Each of her characterizations is distinct vocally and physically and each is compelling.  The plays are concise, minimalist and powerful.

The stage is pitch black for a period of time and then a tiny point of light is seen.  It is soon discerned as the lips and teeth of a woman’s mouth that appears to float through the darkness as she giddily babbles a fast-paced stream of consciousness.  This is Not I and lasts for about 10 minutes.  Utilizing an Irish brogue and often laughing infectiously Dwan is quite entertaining amidst the sheer symbolism. 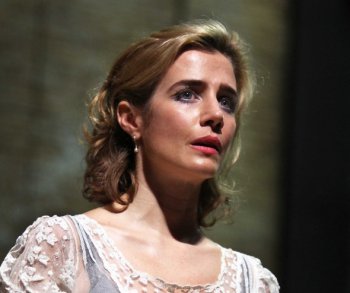 The statuesque Dwan is next seen in an ethereal gauzy white gown with her flowing blonde hair as she rhythmically paces from one side of the stage to other.  Footfalls deals with a woman attending to her dying mother.  Through a recorded voice and through live performing, Dwan hypnotically plays both mother and daughter.

Dressed in a black evening gown with her hair up Dwan is at her eeriest in Rockaby as she sits in a large rocking chair that rocks back and forth.  She recalls events from her life and that of her dead mother. 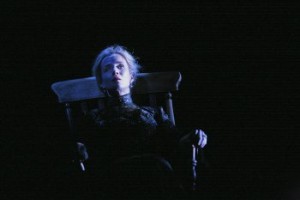 This performance and Beckett’s words are enhanced by the ravishing theatricality of the production.  Directed by Beckett associate Walter Asmus with supreme precision that faithfully follows the author’s stage directions, this production truly represents his vision.

Scholars, critics, actors and audiences have long been entranced and intrigued by these plays.  They appear to reflect Beckett’s perpetual theme of despair and joy coexisting within the human condition.  This mesmerizing production of Beckett Trilogy: Not I/Footfalls/Rockaby vividly captures that expression with Lisa Dwan’s titanic performance and its striking presentation.