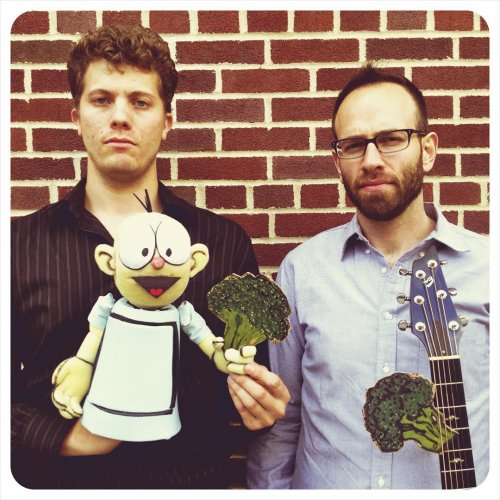 Eric Wright and Matt Singer in a scene from “What Are You Eating? (Photo credit: Courtesy of The Tank)

At this point I’ve heard every rule and regulation

that govern my consumption of every mammal and crustacean

of every fish and chicken and pig and cow,

every grain and every green

of all things canned and bottled, frozen and boxed, fatty and lean

The stage is set for What Are You Eating? with two tables and chairs each for two people. In the center, is a dining room table that seats four, above it is a window that serves as a playing area for puppets.

When the audience enters they are greeted by Eric Wright, a genial black-clad young man who chats with everyone.  For this “dinner party,” he encourages people to sit in one of the chairs onstage that are eventually taken.  Off to the side of the stage is a small bar selling wine and soft drinks.  Those who don’t buy one are given an “imaginary drink,” a small cardboard cut out of a beverage.  The audience holds them up during the show’s effusive opening toast, thanking those involved with the production.

Matt Singer, a convivial bearded young man, plays guitar, and sings, as does Mr. Wright. Following pleasantries and explanations, Wright leaves and appears now in the window, with “Billy,” a floppy Simpsons style hand puppet that he dexterously manipulates. Billy is a boy with large eyes and flapping arms. 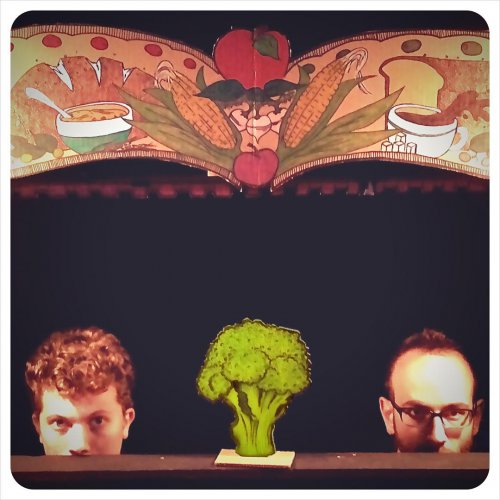 Eric Wright and Matt Singer in a scene from “What Are You Eating?” (Photo credit: Courtesy of The Tank)

This score is a pleasant folk music affair with puns, sincerity, and silliness.  Other characters such as a grouchy doctor appear as cardboard cutout puppets, along with cardboard cutouts of various foods.  The audience on stage occasionally joins in for bantering and comments, and holding up their cardboard food from their plates.

Nothing is really objectionable.  Except for a few minor, adult references such as a lyric about cocaine in Coca Cola, the goofy material is suitable for and could be enjoyed by children.  For those from past generations, it’s wittily reminiscent of old-time children’s television shows from the era of Soupy Sales, The Magic Garden, and Wonderama.

Mr. Wright is an excellent puppeteer and Mr. Singer is a fine guitarist/composer, and the two have a great camaraderie and both sing very well.  They created this good-natured show that is ably directed by Emily DeCola, with a breezy pace and lovely visual stagecraft.

It ends a bit abruptly with the audience invited onstage for snacks consisting of a variety of packaged chips and packaged dried fruits.  Though not substantial, What Are You Eating? Is an appealing diversion that’s very well performed and presented.

Running time: 45 minutes with no intermission