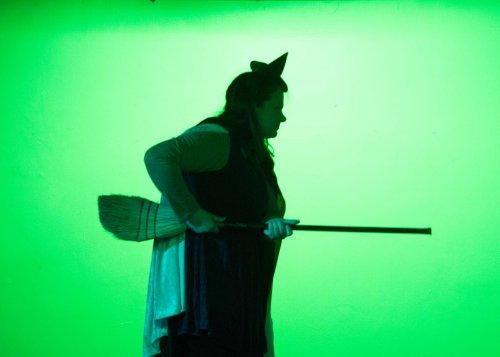 Smiles, chuckles and laughs are plentiful throughout Wicked Frozen. It’s an amusing musical spoof of the Broadway musical Wicked with touches of Disney’s Frozen. Young adults and those older with a sly sense of humor will be entertained.

Zoe Farmingdale’s book is a tart and good-natured treatment of the salvation of a high school misfit. The cheery, witty and melodious score has lyrics by Ms. Farmingdale and Toby Singer and music by Mr. Singer. An ode to IKEA is particularly catchy. Mr. Singer’s successfully eclectic music is perfectly realized by his arrangements and sound design.

The Boston setting gets a lot of comic mileage with puns, cultural references and the cast playing up that accent. “Park your car in Harvard Yard” is of course heard.

We’re at Stephen Schwartz High School where earth science teacher and former actress Kristin Chenobell’s drama club meeting is cancelled due to a blizzard. She clashes with the cranky principal Ms. Andersen-Baum and we learn that Miss Chenobell’s father is very ill and that she gave up her show business career to take this job to support them.

Before she can leave, one student shows up, Adele Dazeem. This troubled teen has no friends and her overworked parents are moving the family to Colorado. Adele wants to act out the show she has written, Wicked Frozen for Miss Chenobell. Admirers of Wicked and Frozen will recognize much of the goings on. 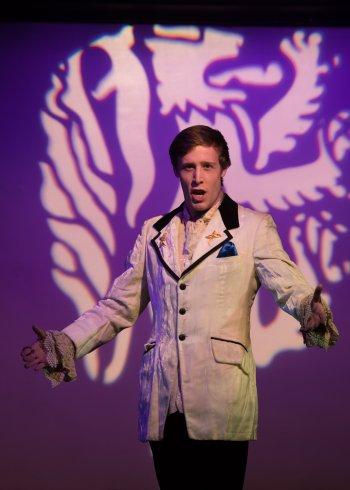 We’re transported to the wacky fantasyland of Scandinorfindelle, where Shitz University is ruled by the imperious Mistress Horrible.  Characters include the cute and popular Glindanna, some mean girls, a handsome prince, a funny snowman, a wizard, a moose and a femme fatale who has power over the climate. Adele is now the green skinned Elsaba, wears a tiny witch’s hat and has the power to freeze. Comically dramatic complications abound.

The blonde and willowy Meagan Wells is a wonderful Miss Chenobell.  With her angular features and sunniness, Lily Davis makes for an appealing Glindanna. A mass of piled up black hair on her head and regally sashaying, Bethany Nicole Taylor is riotous as Mistress Horrible.

Tall, beaming and quirkily handsome, Will Jacobs marvelously portrays Prince IKEA with a hilarious Swedish accent and insouciance. Stealing his scenes is the raucous Jake McKenna as The Funny Snowman. Chris Evan Simpson’s wizard is a glorious portrait of charming old-time Hollywood malevolence.

Switching back and forth between the principal and the 1960’s Batman-style villainess Cli-MAH-te Chan-JE with crisp versatility is the sensational Allison Frasca. Also making a double-time impression is the deadpan Tyler Joseph who sweetly appears as the Kustodian Kris and Nice Guy Kris. 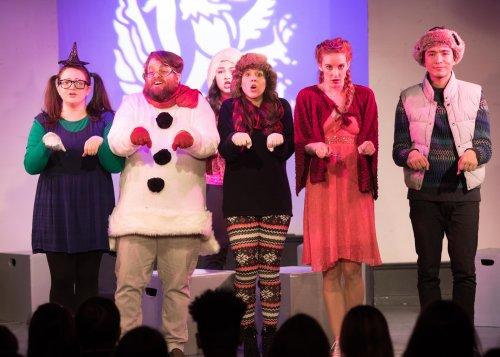 The mirthful Vanessa Magula gives a delightfully exaggerated performance as a shrewish student in a wheelchair. The winning Natalie Sullivan is another zany student and scores with a Judy Garland sight gag.

Farmingdale’s high energy direction emphasizes briskness that sustains the comedy as well as feeling and achieves a grand scope on the contained stage. Her adept choreography is suitably cartoon-like with the “Boston Anthem” being a humorous sequence that has hard-hatted construction workers drilling in herky-jerky movements as they sing.

The spare scenic design consists of minor furnishings and some panels from which the cast enters and exits and on these and a screen center stage are projected arctic, fiery and whimsical images. It’s a strategically uncluttered terrain freeing up the space for the company of 11.

Maarten Cornelis’ fine lighting design ranges from bright hues for the realistic portions to effective dark tones for the imaginary ones. Costume designer Jennifer Anderson goes all out with a variety of hats, accessories like the carrot nose attached to eyeglasses for the Funny Snowman as well as a campy yellow jump suit and red cape for Cli-MAH-te Chan-JE. Ms. Anderson’s creative efforts greatly contribute to the colorful spectacle on display.

A 15-minute version of Wicked Frozen was performed at the 2014 West Village Musical Theatre Festival. Later that year and in 2015 a 75-minute edition appeared at the People’s Improv Theatre. This incarnation has been arguably over-expanded as at 95-minutes the second half drags.  Still, Wicked Frozen is high caliber silliness with twists of emotion.