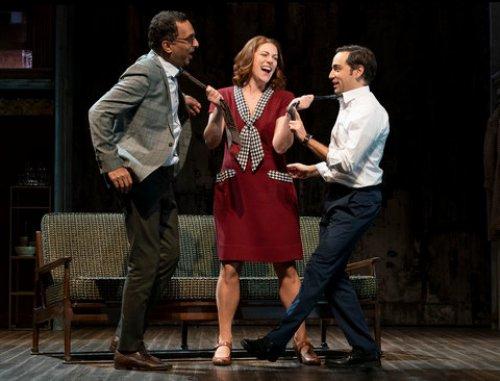 Stephen Sondheim’s most autobiographical and intimate musical, Merrily We Roll Along, is now in revival at the Roundabout’s Laura Pels Theater. Having seen six other productions since its Broadway premiere in 1980, this current Fiasco Theater version utilizing a cast of six is perhaps the best of the eight I’ve seen–including two in London, the rest in New York.

Usually considered one of Sondheim’s lesser musicals, albeit with one of his best scores–and needless to say, that’s saying a lot–this production provides a heft and a story that are sorely lacking in previous versions. There is no denying or gainsaying its power to impress, as each and every song comes through with its capacity to build characters and tell stories. If the stories are less than satisfying in earlier productions, that’s due more to bookwriter George Furth (adapting the original play by George S. Kaufman and Moss Hart) than to Sondheim or to his other collaborators, each of who has provided an impeccable contribution to the current enterprise. 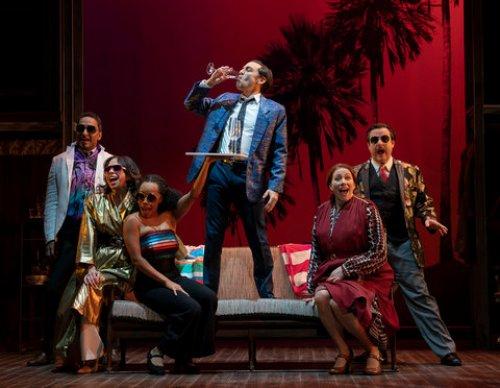 They include Derek McLane whose extremely busy unit set design fills in details to the story that have always been neglected in the past. And then, there’s the always evocative and helpful lighting design by Christopher Akerlind, not to mention the dead-on sound design by Peter Hylenski that underscores what may be Sondheim’s most melodic score. It certainly includes his most memorable and popular songs: the snappy “Old Friends,” the plaintive “Not a Day Goes By,” the sui generis  “Good Thing Going’–not to mention the infectious “Our Time” and “Opening Doors.” With Merrily We Roll Along, Sondheim defies the usual criticism that his lyrics excel his music.

And even though this particular cast of singers leaves something to be desired–their voices are uniformly strong, but never pretty–they put the emphasis where it should be, on the lyrics, that tell the complex story, which moves backwards in time, to ultimately divulge the inevitable disappointments that everyone’s life entails. It’s nothing less than universal, which is the musical’s major message. It’s also classical, convoluted Sondheim, whose rich ideas are never less than subtle. 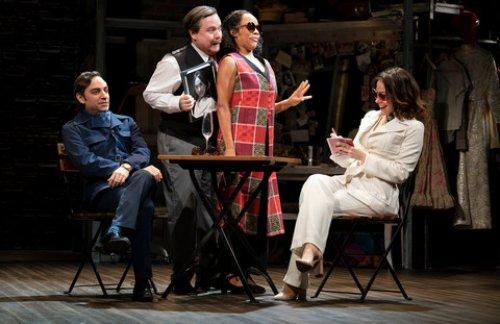 Given they’re aging backwards, so to speak, it’s probably irrelevant to mention that all three of the leads seem the wrong age for their roles, and, more specifically, too old. They include an obese Jessie Austrian as the alcoholic Mary, who was based on Sondheim’s friend, Mary Rodgers–the daughter of composer Richard Rodgers, no less–who eventually and ingeniously loses her fat suit, as she becomes younger, as well as Ben Steinfeld as Frank, Mary’s “deepest and closest friend.” While the diminutive and earnest Frank represents Sondheim the composer, Charley, portrayed by the spunkier Manu Narayan, is Sondheim the lyricist.

Nonetheless, they each give a magnificent performance, and, as directed by Noah Brody–and under the musical direction of Alexander Gemignani–they emphasize Sondheim’s precision lyrics. With Lorin Latarro’s choreography, the staging brings fresh, if literate, meaning to each of the songs delivered at a slower pace than usual, which helps magnify the words.

McLane’s detailed set design also adds to enhancing the story’s underpinnings, making this one of the strongest versions of Merrily yet.

Running time: one hour and 50 minutes without an intermission