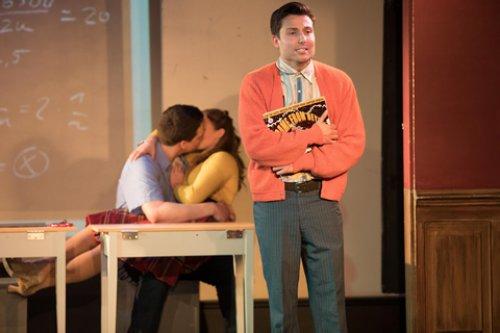 Bryan S. Walton, Kayleen Seidl and Clint Hromsco in a scene from “It Came from Beyond” (Photo credit: Adam Smith, Jr.)

Spoofs by their nature aren’t dramatically involving; they’re striving for unrelenting laughter as Mel Brooks arguably achieved in his classic cinematic genre tributes. It Came From Beyond is a virtual laugh free, interminable and unrewarding musical parody of 1950’s sci-fi movies. The wan alien invasion occurs an hour into it and there’s 45 more minutes to go. It’s a leaden combination of the styles of Grease and Little Shop of Horrors.

Author Cornell Christianson demonstrates an affection for the subject matter that echoes Invaders from Mars, The Day the Erath Stood Still and Invasion of The Body Snatchers. There are some humorous cultural references and mild double-entendres but the stale plot hasn’t been shaped into a compelling narrative and it all just isn’t very funny, depending, of course, on one’s sensibilities.

It’s 1959 and nerdish high school senior Harold has romantic feelings for Becky but the handsome and popular Steve intrudes. Becky’s father, the stern science teacher Mr. Fielding assigns the two young men to team up on a science project. Harold is hepped up to read his comic book It Came From Beyond. It tells the tale of an alien spaceship masquerading as an asteroid that lands on Earth and incites a Communist obsessed Colonel to take military action. The show tiresomely switches back and forth between the two threads of high school life and the comic book’s plot.

The jaunty score with music and lyrics by Stephen M. Schwartz and Norman E. Thalheimer is a fine pastiche of pop and show tunes but with 20 numbers, a good deal of is extraneous. 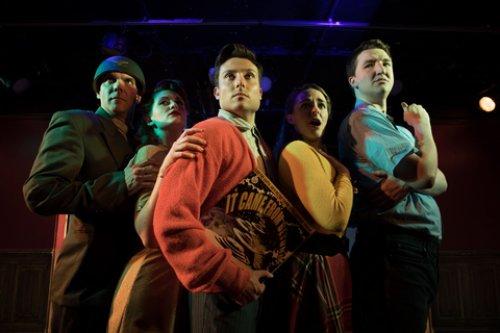 Though without any wow moments Jim Blanchette’s direction is solid and makes the presentation smoothly watchable.  Choreographer Mark Blowers

attempts some choice diversions amidst his pedestrian sequences. The contained stage is bare, except for three school desks and the back wall has a screen that periodically displays projections of old movies and illustrative images.

Lighting designer Maarten Cornelis efforts are basically on and off in terms of bright and dim. Austin Nuckols and Lauren Winnenberg’s sound design proficiently renders the music and effects. Costume designer Jennifer Anderson provides basic garments that visually realize the time period with a comical sense of realism.

In the mode of vibrant Broadway leading ladies of the likes of Donna Murphy is the red haired and vivacious Kaitlyn Baldwin as the home economics teacher, Ms. Benson and as Private Jayne, the assistant to the nutty colonel. Cracking wise with the precision of Eve Arden and exhibiting superior singing and dance skills, Ms. Baldwin invests herself in the material with colossal force as if she were starring in Wonderful Town or an edition of Forbidden Broadway.

The spirited Kayleen Seidl as Becky is delightful as she moves about in a plaid skirt and tight sweater channeling the essence of 1950’s good girl actresses such as Debbie Reynolds and Sandra Dee. 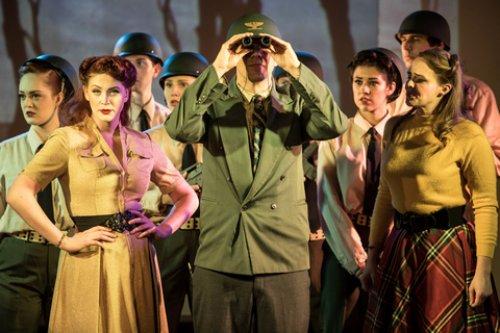 Kaitlyn Baldwin, David R. Doumeng and Kayleen Seidl in a scene from “It Came from Beyond” (Photo credit: Adam Smith, Jr.)

Wearing a chintzy gold lamé costume with mechanical embellishments while having to repeat buzzing and beeping sounds to portray a computer named Vera in a dull running gag is the formidable Natalie Michaels. Ms. Michaels steadfastly soldiers on with dignity and commitment.

Clint Hromsco as Harold, David R. Doumeng as Mr. Fielding and the Colonel and Bryan S. Walton as Steve all sustain the energy and drive to appropriately fulfill their characterizations of these stock characters.

With different casts and creative teams, It Came From Beyond was performed at the 2005 New York Musical Theatre Festival and in subsequent incarnations in Los Angeles. This is it’s Off-Broadway premiere and during its long gestation it hasn’t yet acquired the alchemical qualities necessary for the campy spectacle it aspires to be.

It Came From Beyond (extended Tuesdays through March 26, 2019)