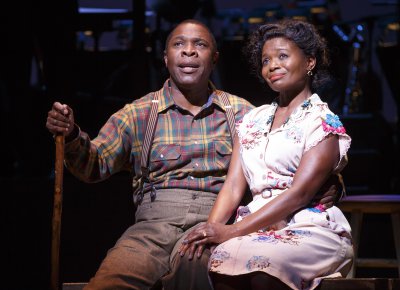 Michael Potts as “Little Joe” and La Chanze as Petunia in a scene from “Cabin in the Sky” (Photo credit: Joan Marcus)

This parable with fantasy elements takes place in an African-American town in the Deep South possibly in the 1930’s.  The community is holding vigil for charming rogue “Little Joe” Jackson who has been knifed in a scuffle and is on his deathbed.  Due to his bad ways, he is going to hell.  His stalwart wife Petunia successfully pleads with the heavenly powers for him to have a second chance.  He is restored to life and if he reforms during the next six months he will then be allowed into heaven.  What follows is an often comical tale of redemption with serious overtones.

Winner of the Tony Award for Best Actress in a Musical for the 2005 production of The Color Purple, LaChanze is commanding as Petunia.  Her powerful vocal talent, superb comedic and dramatic abilities and star quality all make her performance a memorable marvel.

As “Little Joe,” Michael Potts winningly conveys the character’s good-natured irresponsibility with his down-home dialect and everyman persona.  After coming into a windfall, he regally strides around in a tuxedo and a top hat passing out $50 bills like a rural John D. Rockefeller.

Hilariously stealing every scene he’s in with his melodious deep voice and animated face is Chuck Cooper as the Devil’s Head Man frequently sitting atop a golden throne.  Being the son of Lucifer allows the mature Mr. Cooper to amp up his petulance with the antic flair of the early Jerry Lewis.  His costume is a suitably red suit with a glittery red-sequined jacket. 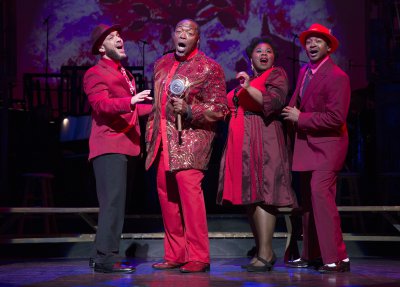 Chuck Cooper as The Head Man surounded by his minions in a scene from “Cabin in the Sky” (Photo credit: Joan Marcus)

Norm Lewis with his dry delivery is comically understated as The Lord’s General, God’s angelic representative and during his songs utilizes the dynamic voice that has made him one of Broadway’s leading men.  He is dressed in a gleaming white suit and a luminous sash and presides from a white throne.  Mr. Lewis and Mr. Cooper have marvelous chemistry together as they depict good and evil battling.

Director Ruben Santiago-Hudson has inventively and thoughtfully staged the show with vibrant precision.  Mr. Santiago-Hudson’s work combined with Camille A. Brown’s often stunning choreography makes for an eye-catching spectacle including the dream sequence with The Queen of Sheba in a golden gown and headdress. Santiago-Hudson also collaborated with Encores! artistic director Jack Viertel in adapting Lynn Root’s original book into an engagingly flowing narrative with depth.

Besides strikingly presenting the imaginary characters, Karen Perry’s gorgeous costumes also display the reality of people living in that time and place with well-crafted authenticity.

The simple backdrop of a painted cabin and the top of the stage hanging with rustic beams are other hallmarks of Anna Louizos’ clever scenic design that also includes a second act scene in a roaring honky-tonk bar.  Integral to the show’s visual success is Ken Billington’s fanciful lighting that at times has one side of the stage bathed in red and the other in bright white to display the states of hell and heaven. 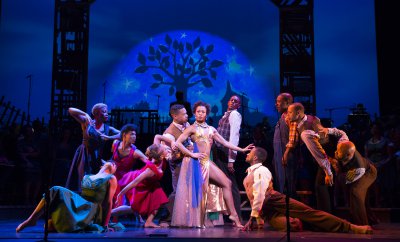 Bahiyah Hibah as Queen of Sheba and ensemble in the Vision Ballet from “Cabin in the Sky” (Photo credit: Joan Marcus)

Under music director’s Rob Berman ebullient stewardship, The Encores! Orchestra deftly performed the score while in view during the show.

Opening October 25, 1940 to generally critical acclaim, Cabin in the Sky was staged and choreographed by George Balanchine.  It starred Ethel Waters as Petunia, Dooley Wilson (Sam the piano player in the classic movie Casablanca) as “Little Joe” and leading dance figure Katherine Dunham as Georgia Brown.  The lively score written by composer Vernon Duke and lyricist John Latouche contained several songs that became standards.  Despite all of these high caliber features, it ran for a relatively brief 156 performances.

The1943 MGM film adaptation was the cinematic directorial debut of Vincente Minnelli. Ethel Waters repeated her stage role and introduced the new song “Happiness is a Thing Called Joe” written by composer Harold Arlen and lyricist Yip Harburg for the film and that number is added to the original score for this production.

The mission of Encores! is to celebrate “the rarely heard works of America’s most important composers and lyricists” and that is definitely realized by this delightful production of Cabin in the Sky.

Running time: two hours and twenty minutes with one intermission