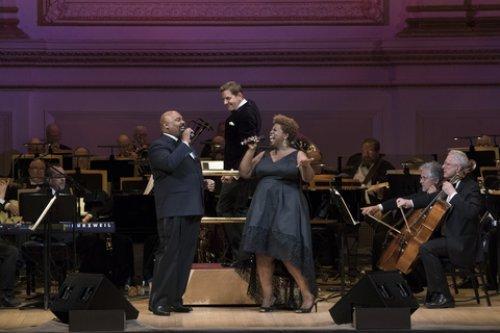 “September” by Earth Wind and Fire was gorgeously mashed up with Kool & The Gang’s “Celebration” and was the soaring opening number of The New York Pops’ exhilarating rhythm and blues concert, Heart and Soul. The event celebrated African American History Month and Valentine’s Day.

James Brown’s “Papa’s Got a Brand New Bag” and “I Got You (I Feel Good)” was another masterful instrumental arrangement by Sam Shoup that showcased the 78-piece orchestra’s tremendous musicianship.

Besides the show’s aural achievements there was also the visual delight of seeing The New York Pops’ music director Steven Reineke euphorically bouncing around to the beat in a wine-colored velvet blazer as he conducted. There was also the sight of the large strings section vigorously using their bows as they played one classic R&B tune after another.

Their programs frequently lean heavily on The Great American Songbook, so perhaps this was an opportunity for Mr. Reineke and The New York Pops to really let loose and their enthusiasm was infectious. Reineke quipped several times about the truth of their slogan, “A Different Kind of Orchestra.” He also delivered informative and humorous patter on the background of many of the compositions and the performers. 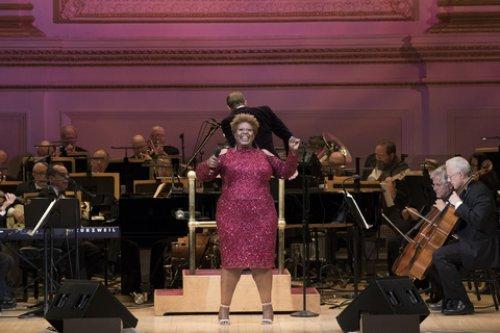 Capathia Jenkins as  she appeared at The New York Pops’ “Heart and Soul” on February 2, 2018 (Photo credit: Richard Termine)

The physically imposing and genial Mr. Iglehart’s dance talents were on great display when he came out for the James Brown number. Iglehart’s superb vocal abilities were evident throughout.  With wide-eyed awe, he remarked that this was his Carnegie Hall debut.

“Let’s Stay Together,” “I Love You More Than You’ll Ever Know,” John Legend’s “Ordinary People” and “Unchain My Heart” were his powerful solos. His inciting the audience to sing along during Stevie Wonder’s “Sir Duke” raucously closed the show’s first act.

Appearing in a series of shimmering sequined dresses of different colors was the commanding Ms. Jenkins. Her full-bodied singing and sunny presence was a joy to experience.

Jenkins truly shone with a Whitney Houston combination of “I’m Every Woman” and “I Wanna Dance with Somebody (Who Loves Me)” and later on with the Dolly Parton perennial “I Will Always Love You.” 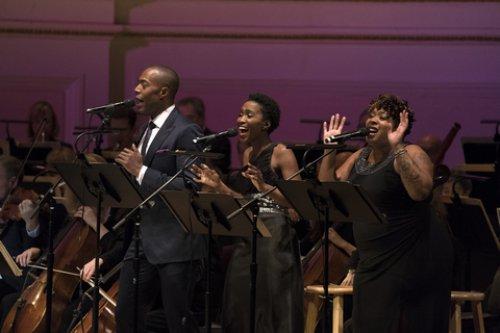 “This is my favorite Michael Jackson song,” she said before launching into a wistful “Rock With You.”  Her “Respect” was up there with Aretha Franklin’s.

“I feel like the luckiest girl in the world when I get to sing one of her songs,” she said of Gladys Knight and reminisced about meeting her. This led to a beautiful rendition of “Midnight Train to Georgia.”

Iglehart and Jenkins appeared together for several terrific duets.  These were Ashford and Simpson’s “You’re All I Need to Get By,” “I’m Gonna Make You Love Me,” “I Heard It Through the Grapevine,” and the show’s finale, “(Your Love Keeps Lifting Me) Higher and Higher.”

Barry White’s “Love’s Theme” was given a grand symphonic treatment by The New York Pops, as was a Diana Ross medley of “Stop! In the Name of Love,” “Touch Me in the Morning” and “Ain’t No Mountain High Enough.”

That last song was the concert’s encore. Mr. Iglehart, Ms. Jenkins, Ms. Hall, Mr. McElroy and Ms. Talley all joined with Reineke and The New York Pops for this rousing sendoff.

The only thing missing was a symphonic version of Isaac Hayes’ “Theme from ‘Shaft'” which undoubtedly The New York Pops would have done breathtaking justice to.