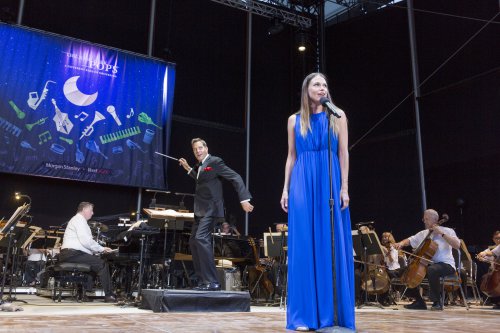 “Mabel This Time,” hilariously sung by Sutton Foster to her adorable dog onstage, was one of the prime highlights of The New York Pops’ inaugural outdoor concert at Forest Hills Stadium.  “She’s a rescue.  We think she’s part dachshund and part Yorkie.  She’s a dorkie.  Like I was…” The song was a very funny special material reworking of Kander and Ebb’s Cabaret classic “Maybe This Time.”  The lovely weather consisting of a breezy summer night added even more pleasure to the event.

As the guest star, much of the show was centered on the two-time Tony Award-winning Broadway star who gloriously appeared throughout half of the show. Dynamic music director Steven Reineke conducted the superb orchestra for this eclectic program that ranged from Cole Porter to television show themes.

“The epitomy of a true triple threat performer” was how Mr. Reineke introduced Ms. Foster.  “I’ve never been here or sung outside with a big orchestra before” was her sweet response to the huge audience response.  First clad in a slinky blue dress, she later changed into a tailored gray tunic and then into a striking black gown with rhinestones.  Her versatility was ever present as she opened with the thrilling Duke Ellington collaborative composition, “I’m Beginning to See The Light.” Then it was on to rollicking renditions of “Anything Goes” and “I Get a Kick Out of You,” from that Broadway revival for which she won her first Tony Award.

“Does anyone remember 8 Tracks?” This rhetorical question led to a fond remincisences of her mother who died two years ago and whose favorite tape was John Denver’s Greatest Hits which “We all listened to in our wood paneled living room.”  She then sang a moving “Sunshine on My Shoulders.”

After recalling that her older brother Hunter Foster was in the Broadway musical The Bridges of Madison County, she wonderfully sang her favorite song from the show, “It All Fades Away.”

A lively combo of “If I Were a Bell” and “Singin’ in the Rain,” included the appropriate dance moves including the requisite umbrella.  “Down with Love” was done with terrific slyness.

There were two “special guests.”  Her charismatic Anything Goes co-star Colin Donnell powerfully sang “On The Streets of Dublin” from A Man of No Importance.  He and Ms. Foster also bantered about their recent marriages. Then they did a spectacular duet of “Fit as a Fiddle (And Ready for Love)” made popular in the movie Singin’ in the Rain.  Michelle Elkin choreographed this dazzling tap dance sequence with thrilling twirls and jumps.  Mr. Donnell comically breaking Mr. Reineke’s baton led to the intermission. 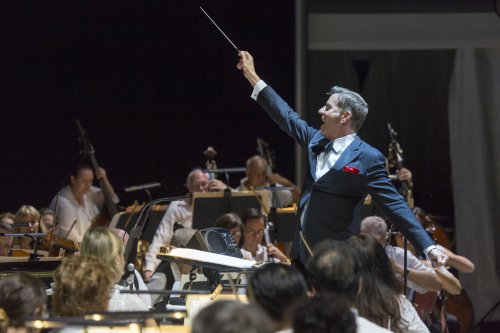 Music director Michael Rafter was on piano for Foster’s numbers and was joined by Clint de Ganon on drums and Kevin Kuhn on guitar.  This highly talented trio definitely enhanced the star’s performance with their tremendous musical skills.

The jaunty overture to Anything Goes opened the show and demonstrated the commanding flair of Mr. Reineke and The New York Pop’s orchestral skills.  The overture to Thoroughly Modern Millie was equally delightful and “Begin the Beguine” was joyous.

Improbably the orchestra’s greatest display of virtuosity was a lengthy portion devoted to themes from classic television shows.  The nostalgic resonance of hearing these familiar tunes again was collectively euphoric for many of the audience.  The Dick Van Dyke Show, The Addams Family, Bonanza, Mister Rogers’ Neighborhood, The Twilight Zone, The Munsters, I Dream of Jeannie, Bewitched, Mash, Charlie’s Angels, Murder She Wrote, and Sex and the City were all marvelously performed.  The theme from The Odd Couple was particularly affecting.  The finale of this portion was an extended and arresting composition of I Love Lucy.

Joe Price’s swinging Nelson Riddle style arrangement of “I’ve Got You Under My Skin” and later a jazzy “The Lady is a Tramp” arranged by Mr. Reineke, was perhaps an unspoken homage to Frank Sinatra for his centennial this year.

The powerful finale was Sutton Foster’s combo of Sondheim’s “Anyone Can Whistle” and “Being Alive.”  Her much awaited encore was “Gimme, Gimme” from Thoroughly Modern Millie for which she won her first Tony Award.  With her arms upraised she displayed the riveting star quality that has attracted many theatergoers.  “This has been awesome!” she aptly declared.

Running time: two hours and twenty minutes including one intermission