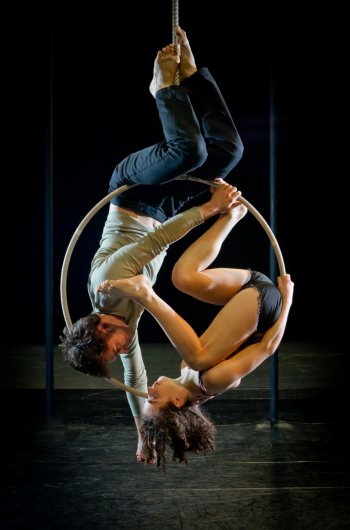 “A dance of our actions to your reactions.  No one knows the steps yet,” explains the charming and funny performer Colin Davis, during his introductory remarks to Séquence 8, a thrilling program of contemporary circus sequences.

For 95 minutes, there is one often dazzling number after another, performed by this Canadian troupe of eight, athletic, international, youthful performers.  Their physical prowess is combined with modern dance choreography, acrobatics, verbal and visual comedy, a lively score of original music and pop songs, and striking lighting.

The backdrop is a hanging assortment of large, unfilled picture frames of various shapes, which besides having an aesthetic, and perhaps symbolic dimension, are pleasing to look at. Mr. Davis is the show’s host and with often dry humor banters with the audience and the other performers, and appears in a number of the continually spectacular series of acts.

A woman jumps up and down on a Russian barre with breathtaking movements in between, and another woman does an exciting gyroscopic routine from a hoop. A man’s fantastic trapeze routine, a man precisely juggling wooden boxes. The cast dancing through long strips of black tape representing the complexity of relationships.  Men on a seesaw, pole climbing, the cast soaring through hoops, one jumping through a high, wooden hoop several times until the action is perfect and the hoop breaks.  These are all among the most exhilarating sights. 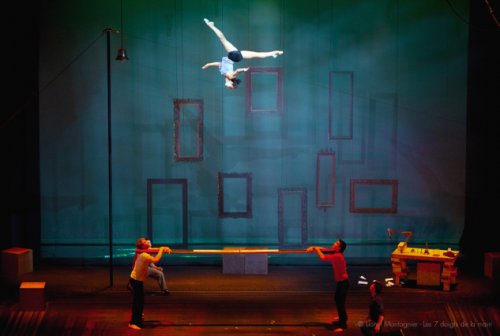 The exciting direction and choreography by Shana Carroll and Sébastien Soldevila gives a unity and momentum to the show. Ms. Carroll and Mr. Soldevila are two of the seven artistic directors of Les 7 Doigts de la Main (The 7 Fingers), the Montreal based company founded in 2002 that created and presents Séquence 8.  The 2013 hit Broadway revival of Pippin, was choreographed by them.

Their previous full-length show to play in New York City, Traces, ran for over a year Off-Broadway.  This one opened in France in 2012, and has since toured 15 countries, before this 12-performance engagement at New York City Center.

Anne-Séguin Poirier’s set and props all have a timeless, visually arresting simplicity.  Costume designer Manon Desmarais’ inspired creations are an eclectic collection of standard athletic wear and street clothes with creative flourishes.  In one scene where performers partially disrobe, a man’s shirt becomes a dress.

The lighting design of Nol Van Genuchten vibrantly enhances the proceedings.  Boldly highlighting particular moments of the performances, at times subtly shifting to dimness, and with stark blackouts, it’s a key element of the show’s success.

“Party in The USA,” sung by Miley Cyrus is one of the various pieces of popular music wittily incorporated in with Seth Stachowski and Nans Bortuzzo’s often cool, jazzy original music.  The blend of it all is perfect and appropriate accompaniment to the continual spectacles on display.

Audiences of all ages and types will find much to be enthralled by during the cumulatively amazing Séquence 8.