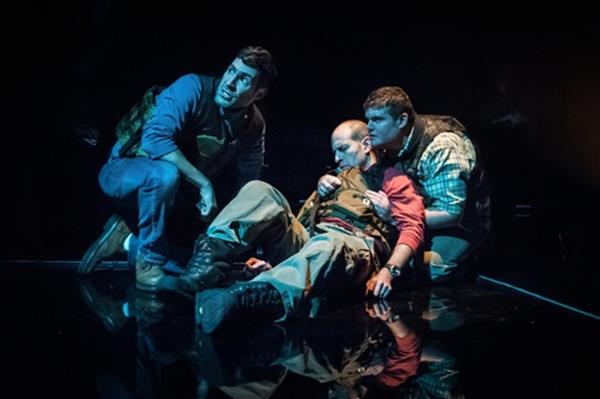 “But when that river is under you, all that is gonna change. There’ll be nothing you can do as vice president of your smart advertising company that’s gonna make any difference at all when the water starts to foam up. Then, it’s not gonna be what your job title says you do, but what you actually do.”

Set in Georgia in 1970, four upper middle-class, white-collar men go on a weekend rural canoe trip with disastrous results in this highly stylized theatrical adaptation of acclaimed poet James Dickey’s allegorical novel, Deliverance which was published in 1970. The 1972 film version directed by John Boorman was a critical and commercial success.

This stage production is by The Godlight Theatre Company and Joe Tantalo has vibrantly directed playwright Sean Tyler’s excellently constructed, concise script. The clash of cultures between the urban middle class and the rural lower class is sharply explored. It’s a brisk 90-minute, small-scale spectacle that employs an assortment of theatrical devices to powerful effect.

The audience is seated in two rows surrounding the intimate four-sided playing area at 59E59. The actual bare stage is a polished black floor that serves as numerous locales including the wilderness as well as the rapids the quartet rides on. There are mirrors along the walls of the theater and above them Biblical verses printed to look like carvings on marble.

When the audience enters, one actor is in the center and the others are off to the sides all looking into space. The show begins with the sound of jarring, ominous music by composers Danny Blackburn and Bryce Hodgson that recurs throughout. Then a spotlight shines on the center actor. The sounds of the river are heard. Through their conversation, the four men are introduced and their adventure begins.

Extensive use of mime is employed in lieu of props. Rowing, archery, shooting with guns, knives and aquatic sequences are all masterfully indicated by the cast. There are a real guitar and a real banjo expertly performed during the musical confrontation between the city men and the country people. 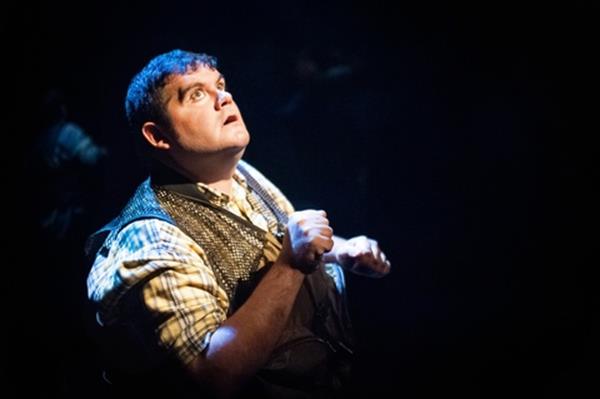 A key event of the story that was memorably depicted in the film version was that of a male rape. Here, with purposeful placement of the actors and with the skillful lighting it is chillingly suggested and explicitly represented without being gratuitous.

Gregory Konow, Jarrod Zayas, Sean Tant and Nick Paglino are the very fine actors who play the gentrified quartet. All give personable, intense performances with adept Southern accents that perfectly render the different traits of their characters. Due to the plot developments, Mr. Paglino has somewhat more to do and ably captures the spirit of the ordinary man called upon to behave heroically.

Jason Bragg Stanley, Eddie Dunn and Bryce Hodgson each portray multiple roles of the various mountain dwellers the city dwellers encounter. With simplicity and great depth, they portray menacing hillbillies and law enforcement officers. Mr. Hodgson winningly makes the most of his three appearances, as “Short Man” playing a guitar, as a sadistic brute, and as a wily deputy sheriff.

This outstanding cast of seven is all perfectly in synch with each other and are a true ensemble of the highest caliber.

The highly successful artistic collaboration of all the creative talents involved makes this Deliverance a boldly striking work of uniquely theatrical storytelling.