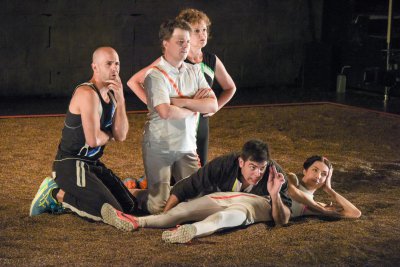 If you thought Bedlam’s artistic director Eric Tucker had created physical productions for his acclaimed acting troupe in the past, think again. His A Midsummer Night’s Dream, seen this summer at the Hudson Valley Shakespeare Festival and now in residence at the Pearl Theatre, gives the actors a workout from beginning to end. Whether all audiences will go along with it – it is tiring for both performers and viewers – is a question, but like watching a world-class circus or ballet troupe, you know at the end of the evening that you have seen an extraordinary imagination at work. Tucker just expects everyone to go the extra mile. This is not a Midsummer for people who have never seen the play before, but one for whom the traditional interpretation no longer has anything to offer.

The play is performed in a giant sandbox covered in gravel with several strips of lights in different colors in various places around the stage. No scenery is used as the actors also portray the forest and other needed items, often crawling all over each other as through dense trees. The cast of five who play all the roles are dressed in track suits and sneakers of various colors, two in black outfits, three in white, each with different colored stripes. How will five actors play all of the roles in a complicated Shakespeare comedy? Well, besides each playing several roles (often back to back or in the same scene), each character has his/her own voice and style. And as the actors look entirely different from each other, there is no confusion. Once the plot is all wound up, there is no trouble in following who is who. 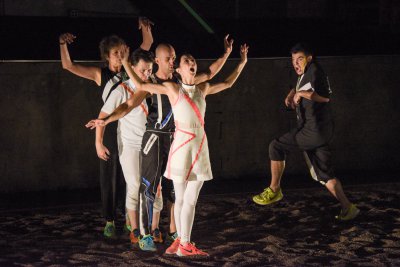 Unfortunately, the incoherent prologue makes things more difficult: the opening scene is played three ways with the actors switching roles. This sets the tone that we are in for something unusual, but it also makes it difficult to figure out which actor is playing which role. Eventually, the wildly knockabout and inventive style takes hold, and the evening becomes a sensational riff on interpersonal relationships gone amok. If the characters, the two couples who run off to the Athenian forest to escape authority and the law for the sake of love, have a magical midsummer night, then so do we as the audience.

Joey Parsons is a raging Hermia, while her Tatiana, Queen of the Fairies, is overcome with the wonder of it all. Playing both Helena and Hippolyta, Nance Williamson is at first all frustration, and then a witty adversary. Other unforgettable moments include Bedard and Williamson playing Snug the Joiner as conjoined twins, speaking in unison in the voice of one mentally challenged. It may not be politically correct, but they always get their laughs. 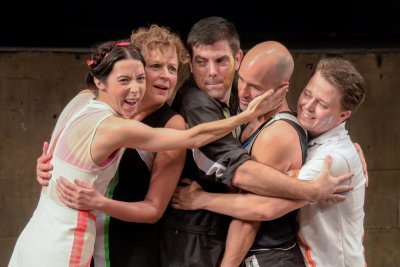 Tucker’s production team is well attuned to his style and concept. John McDermott who has designed all of Bedlam’s sets in the past has created the space for this ‘violent playground,’ which in its way suggests Peter Brooks’ legendary production in the 1970’s. Jessica Wegener Shay is responsible for the choice of track suits and the costume pieces for the Pyramus and Thisbe play-within-the-play for the wedding nuptials. The subtle and not so subtle light changes are the work of Eric Southern.

To his dazzling credits of reinventing Saint Joan, Hamlet, Sense and Sensibility, The Seagull, and Twelfth Night, wizard Eric Tucker has added a knockabout version of A Midsummer Night’s Dream which may not be what everyone was looking for, but once you have seen it you will never approach this comedy the same way again. Cheers for the company of five actors who are able to keep up with his physical style which pushes the envelope to a new kind of theater.