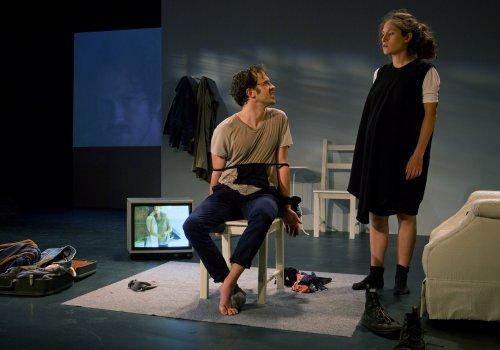 Gore Abrams and Alexandra Zelman-Doring in a scene from “The Itch” (Photo credit: Walter Wlodarczyk)

Like a piece by a Fluxus provocateur, playwright Alexandra Zelman-Doring’s The Itch is tedious, seemingly pointless and has patches of intrigue.  We’re far from the realm of a well-made play and in the territory of “Downtown”-style theater.

It’s presented by Throes Theater who “have explored many performances ranging from experimental gallery showings to street performances and more traditional two-act plays.”

We first meet the 27-year-old, visibly pregnant Ana in her shabby Bushwick, Brooklyn apartment. Smoking a cigarette, she’s talking on the phone to a representative of a fertility clinic.  She is a singer-songwriter-guitarist who also creates musical instruments from found objects but makes a living as a middle school geometry teacher.  She wants to sell her eggs in order to pay for her twin brother’s rehab.  The play’s title refers to his craving for drugs.

He is Simon, a temperamental musician who is back from a gig in New Orleans. Also integral is Ana’s businessman boyfriend Jordan.  Later we encounter the daffy Libby, the fertility clinician who becomes emotionally involved with Ana. 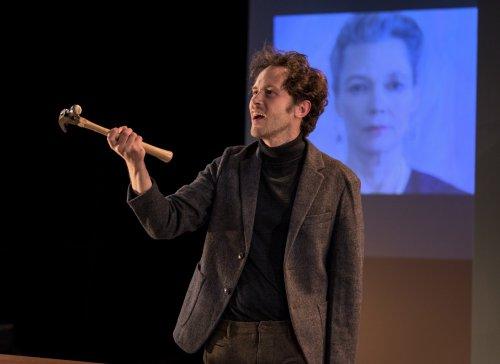 Gore Abrams in a scene from The Itch” (Photo credit: Walter Wlodarczyk)

It all obviously must have significance to Zelman-Doring, and may or may not have to audiences depending on their sensibilities.  Boredom or mild interest is the likely possibilities.

In the family’s contentious Thanksgiving Dinner sequence, Ana and Simon’s parents are present.  They’re depicted by separate, silent projections of patrician looking actors in their 60’s, who spout absurdist-recorded dialogue.  In passing, it’s been stated that the father is Jewish.  There are several appearances by the irritating grandmother through rambling answering machine messages.  At various points onstage characters are projected onto the screens and a character walks around with a video camera.

Ms. Zelman-Doring also plays Ana with suitably wry detachment and flashes of passion.  So do Gore Abrams as Simon, Erik LaPointe as Jordan and Coco Conroy as Libby. Dan Berkey and Rae C. Wright appear as the parents.  The cast does their best by the material with their strong characterizations.

The yenta-sounding voice of the grandmother is by Theresa Buchheister who is also the director.  Ms. Buchheister’s physical staging is efficient and adeptly melds all of the elements into a slowly paced yet endurable 90 minutes. 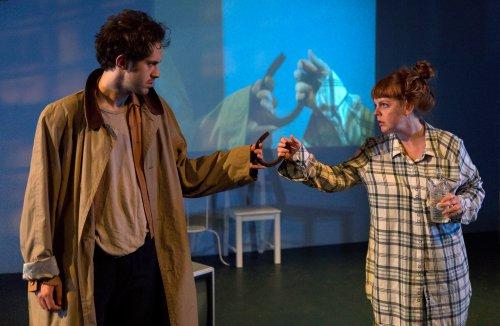 Gore Abrams and Coco Conroy in a scene from The Itch” (Photo credit: Walter Wlodarczyk)

Alejandro Fajardo’s lighting design perfectly conveys the moodiness of this piece with its varying starkness and dimness.

Besides the authoritarian images of the parents, George Gavin’s accomplished video design also includes clips of programs seen on a television.

Jose Cavazos strategic costume design has a lot of black, white and gray that visually complements the production.

The blaring, punk sounding music that punctuate scene transitions is credited to Throes Theater and The Petite Brunettes.  The latter might be a cheeky reference as it’s a genre of pornography.

Ultimately, if accepted on its own self consciously unconventional terms, The Itch is a fitfully engaging experience.