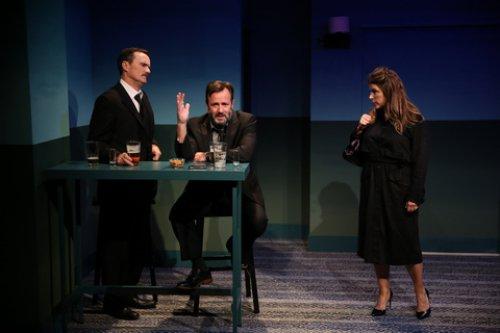 An uneasy and inept mélange of the styles of Neil Simon, Kenneth Lonergan and Noël Coward best describes playwright William Donnelly’s listless No Wake. A divorced couple in their 40’s reunites at the funeral of their mentally unstable daughter who committed suicide.

Rebecca is now remarried to Padgett, a boozy Englishman who works for a pharmaceutical company. Her ex-husband Nolan has gone from one girlfriend to another since they split up. This trio is at an inn in Camden, Massachusetts, to commemorate Sukey (born Susan) who was initially missing and apparently drowned herself.

In 85 minutes, we really don’t learn much Rebecca, Nolan or Sukey as Mr. Donnelly imparts scant biographical details about them, but strangely does for Padgett. Donnelly takes the perennial premise of a divorced couple’s past romantic feelings for each other being reignited and clumsily tosses in the dramatic, morbid bombshell. His glum and stilted finale at Sukey’s apartment is out of Private Lives. The title refers to Sukey’s wish that when she dies that there be no wake. 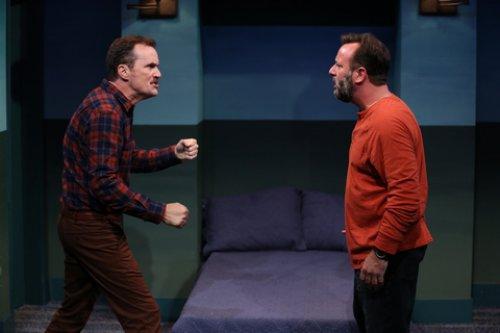 Tim Ransom and Stef Tovar in a scene from “No Wake” (Photo credit: Carol Rosegg)

In the flashy role of Padgett, the animated Tim Ransom steals the show with his delightful channeling of the young John Cleese. Whether yammering scientifically on about frogs, tossing back shots of whiskey or passionately erupting, Mr. Ransom is commanding.

Constrained by their underwritten characters and banal dialogue, the charming and talented Stef Tovar and Tricia Small, as Nolan and Rebecca, respectively, flail around earnestly.

With such poor material and a confined playing area, all director Veronica Brady can do is skillfully position the actors and keep the pace up. Fight director Ned Mochel has crafted an expertly staged battle between the two men that borders on slapstick and is out of place with the sad events. 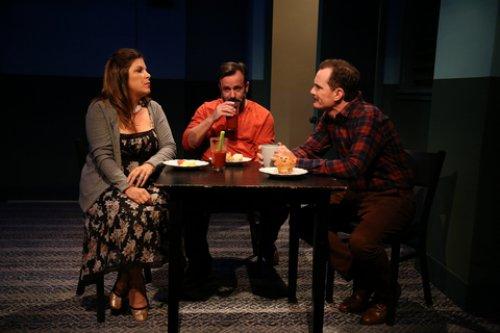 No Wake is an off kilter and dull blend of farce, tragedy and boulevard comedy.

The play was first performed at the Berkshire Theater Festival, and was later produced in Los Angeles and Chicago. This is its New York City premiere.