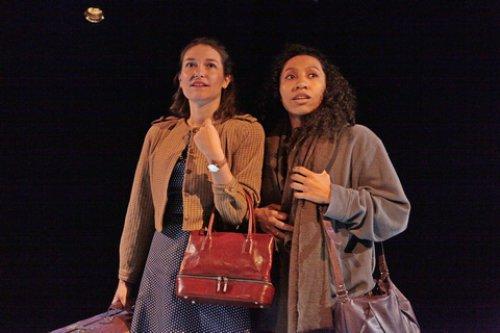 Carlotta Brentan and Paloma Pilar in a scene from “The Journey I Never Made” (Photo credit: Ting Pan)

Adhering admirably to its cultural mission, Kairos Italy Theater is treating downtown audiences to a double bill of smartly written Italian one-acts, each exploring the contentious topic of immigration in their own unique and achingly human ways, as part of its AlieNation repertory. Minimally staged, but with talented actors, the beauty of the plays is largely in the playwrights’ words, which seemingly have lost nothing in translation. Though if either play is appreciably better in Italian, some language lessons and a long trip is in order.

First up is Paolo Bignami’s The Journey I Never Made,  a hauntingly opaque story about two female strangers marooned on a desolate train platform in an unnamed country. As the departure cancellations mount, each woman gives voice to their unfiltered, internal thoughts which reveal a lot of fear, especially about the person waiting next to them. Essentially, the women are in a sort of Beckettian purgatory where they spend the play both struggling to communicate and to overcome their preconceptions of each other.

Suitcase in hand, Silvia (Carlotta Brentan) is the one with the heavier mental baggage who immediately perceives her fellow, and darker skinned, would-be traveler as a potential threat. Her reflexive provincialism, born from a strong self-identification with a homeland she’s trying to leave, is sharply contrasted to the much broader perspective of Petra (Paloma Pilar), a refugee who has experienced the world at its worst but still hopes and strives to see it at its best. At this point, you might think that Bignami is just setting us up for a final dewy-eyed rapprochement between these two women, but as a touching gesture of audience-inclusion late in the play reveals, it’s not just the women he wants to bring together. And if you give yourself over to the moment, it may start the tears flowing.

The play also holds other theatrical surprises. For example, with a clarifying assist from lighting designer Haejin Han, Brentan, Pilar, and director Laura Caparrotti navigate some difficult time shifts, which are touched off when the characters channel the experiences of past immigrants to suggest humanity’s eternal need to go to the “other side.” It’s all elegantly effective, and Brentan, doing double duty as the play’s translator, deserves extra credit for helping to pull it off by conveying both Bignami’s message and his poetry. 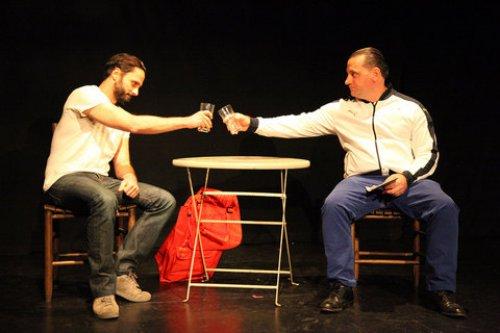 Eric Gravez and Dave Johnson in a scene from “A Story of Love and Soccer” (Photo credit: Ting Pan)

Like Bignami’s play, Michele Santeramo’s A Story of Love and Soccer (translated by Peter Speedwell) is a subdued two-hander with a lot to say about the changing faces of Italy. But though the works overlap thematically, making it natural to pair them up, they could not be more different tonally. Returning with direction by Caparrotti, the production team (set design by Sarah Edkins, costumes by GV Studio) is also even less of a factor than in Bignami’s play.

The straightforward A Story of Love and Soccer is exactly what its title promises, a story, alternatingly told by a pair of adult brothers. They start with an overview of the current demographic situation in their southern Italian village, where a wave of recent immigration has led to an even more recent wave of ethnic violence, which hasn’t been good for anyone’s above-board or below-board economic activities. So, the powers-that-want-to-be have come up with an innovative solution: a clandestine World Cup to determine control of the town square for the following year.

The teams include Poland, China, Brazil, Morocco, India, and, of course, Italy. One brother (Eric Gravez) is the star player for the Italian team while the other brother (Dave Johnson) is its star booster. Unlike the real World Cup, the clandestine one is single elimination, and, thanks to rampant gambling, many of the players aren’t above taking a bribe to perhaps kick the ball into their own nets.

The stakes are also personal, but much more nobly so, for Gravez’s character, who has fallen hopelessly in love with an Indian woman. Although it seems like she is willing to return his affection, there is a cultural barrier between them, which her brother defends hawkishly. Still, the brother has made it known that he’ll allow a breach if the Italians win the tournament, since he stands to earn a bundle if they do.

But just when you think everyone is on their way to happily ever after, Santeramo douses us in reality. And suddenly, whether it’s called home or “the other place” doesn’t matter anymore, because it’s all a nightmare.

AlieNation: The Journey I Never Made and A Story of Love and Soccer (through December 3, 2017)