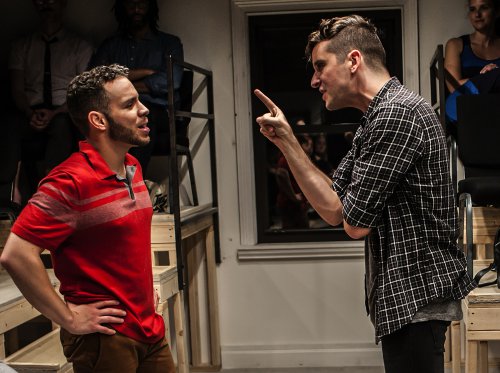 Robin De Jesús and Michael Urie in a scene from “Homos, Or Everyone in America” (Photo credit: Monique Carboni)

Joan Didion used as an anemic punch line attests to the pretentiousness of playwright Jordan Seavey’s Homos, Or Everyone in America.  It’s a mostly excruciating exercise in hollow glitziness.

The pomposity of the Tony Kushner-style title extends to naming its leading characters “The Academic” and “The Writer.”  They’re two gay men in their late 20’s and the play charts their meeting, relationship, breakup and aftermath.

This is accomplished by a dizzying structure of non-linear, rapid-fire, time shifting brief scenes.  This intrusive device undercuts emotional involvement with the couple, as all of the jumping around of the narrative becomes artificial, repetitious and uninvolving.  The period covered ranges from 2006 to 2011.

The Academic is a Latino graduate student working on a degree in Media Studies. The Writer is a Jewish Caucasian struggling for recognition for his short stories and later a novel.  They’ve met on Friendster and go on a date at a Park Slope wine bar.  Both being pseudo intellectuals, much of their conversations are dense recitations on politics, popular culture and homosexuality that incessantly reconfirm how clever they are.

Their relationship is beset with commitment issues. Monogamy and bringing in a third are analyzed.  There’s a debate about the usage of poppers and their sex life is detailed.  The exploration of gay relationships is certainly dramatic material but not in this treatment. 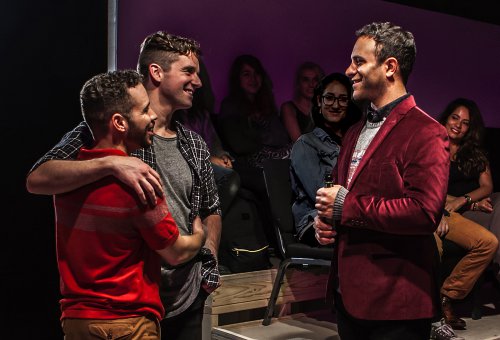 Robin De Jesús, Michael Urie and Aaron Costa Ganis in a scene from “Homos, Or Everyone in America” (Photo credit: Monique Carboni)

In interviews, Mr. Seavey has disclosed the plot twist that one of the characters is the victim of a brutal homophobic hate crime.  This shocking event is cryptically imparted through out but it just feels like more agitprop.  Larry Kramer, Ed Koch and New York City politics are trotted out along the way.

The hyperactive presentation is faithful in rendering the author’s intentions.  The small theater has been configured by scenic designer Dane Laffrey into an arena type, white walled setup without furniture or props.  There are plywood platforms with varying sized stadium-seating rows of black chairs on all four sides.  There’s a window with a 2004 presidential election John Kerry/John Edwards bumper sticker.  The playing area is a narrow, circuitous runway.  Before the play starts, stagehands remove the plastic covering from the floors.  The actors enter shoeless.  It all proclaims that a unique event will be taking place.

Director Mike Donahue has a field day with his pyrotechnical staging.  The actors are vigorously all over the space, at times close to the audience members in their seats.  They intensely tangle with each other romantically and adversarially.  Mr. Donahue’s achievements with the cast are equally in overdrive.

Michael Urie as The Writer and Robin De Jesús as The Academic do deserve credit for effortlessly delivering the huge amounts of verbiage.  Unfortunately, their performances are as grating as the play is.

Mr. Urie has demonstrated tremendous talent on the New York stage in The Temperamentals and in his tour de force solo performance in Buyer and Cellar.  Here, his perpetual vocal fry and exaggerated facial expressions are irritating. 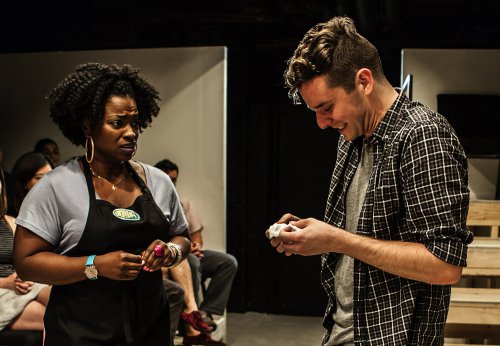 Stacey Sargeant and Michael Urie in in a scene from “Homos, Or Everyone in America” (Photo credit: Monique Carboni)

On Broadway in In The Heights and the most recent revival of La Cage aux Folles, Mr. De Jesús displayed charisma and compelling vocal abilities.  In this production, his unvarying ebullient gee whiz delivery and beaming countenance is monotonous.

The personable Aaron Costa Ganis in the smaller and artificially drawn role of Dan, the eventual third wheel of the relationship, isn’t able to make much of an impression.

With her appealing animation and delightful presence, Stacey Sargeant makes the most of her two-scene part as a cosmetics store clerk.  Ms. Sargeant is genuinely funny as well as quite poignant.

The Writer makes a characteristically smug and fleeting reference to Edward Albee’s Who’s Afraid of Virginia Woolf?.  The characters in that monumental work, George, Martha, Nick and Honey, all vividly live on in the memories of those who know it.  That’s because they’re rendered with depth and their conflicts play out in real time unencumbered by theatrical self-consciousness and sociological polemics.

Homos, Or Everyone in America craves to make grand statements on contemporary gay life. Due to its flashiness, superficiality and self-importance, it totally fails at this.