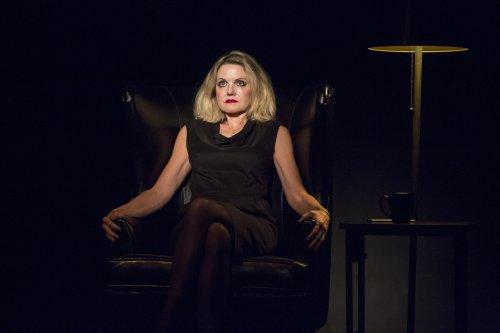 If you’re curious to know about the underworld of Sanguinarians–or people who believe that ingesting fresh human blood is a healthy pursuit and their “donors” who like providing it–you will want to see Squeamish. If not, stay away. The gruesome and graphic descriptions that arise are enough to make one, well, squeamish.

Though it’s a one-woman show, Alison Fraser plays a number of characters by speaking in different voices with a certain technical prowess. The principal one is an upper West Side psychotherapist, Sharon, who is ostensibly talking to her own therapist (a “shrink’s shrink,” we’re told) at his apartment late one night. She’s relating the story of her going to her hometown of Lubbock, Texas, for her beloved nephew’s funeral, after he’s committed suicide. But has Eddie really killed himself, like Sharon’s mother did decades ago when Eddie was only three? For that matter, did Sharon’s mother really commit suicide, we’re made to wonder by the end?

Among the other characters we meet are Sharon’s younger sister Becky, Becky’s husband Burt, and–both as written and performed, perhaps Fraser’s second most effective impersonation–Eddie’s 21-year-old girlfriend Cara. It’s Cara who introduces Sharon into the ways of Sanguinarians. But that too becomes something of a question, because of a sidebar story suggesting Sharon really became one when she was a schoolgirl. 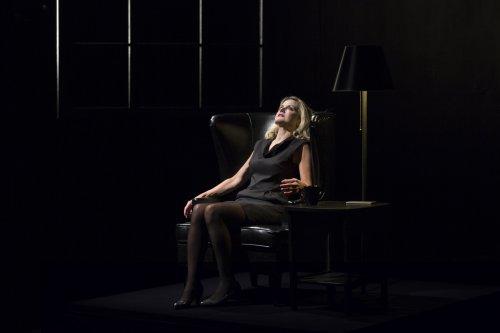 As written (and directed) by Aaron Mark, there are several ambiguities in the otherwise crystal-clear writing, if far-fetched story. The ghastly tale even has a sense of humor on the subject of “cutting” or “slicing,” as when Sharon tells us, somewhat gratuitously, “I don’t even have pierced ears.” We’re even warned by an announcement before the play begins that it’s “a particularly quiet and dark production.” It proves significantly “dark” in more ways than one.

It begins when Fraser walks out into the inky black box of a stage and looks up at a window frame, to suggest that she’s taking in the Manhattan skyline. This is before she ascends a platform that holds an armchair and a side table with a coffee mug which she occasionally sips from. Adding to the darkness is her black sleeveless dress, black stockings and shoes, with only her blond hair and white arms suggesting any light. (The simple scenic and lighting design is by Sarah Johnston, the costume by Michael Growler.)

Fraser’s terribly nervous and jittery as she starts to relay Sharon’s somewhat convoluted story, gripping the arms of the chair with her hands or clenching her knees together–even as she says, “I really am calm now.” She’s been directed by the playwright with what might be aptly termed an exhilarating reserve. Squeamish is definitely a “horror” play that takes the genre to new and higher heights. It’s hard not to recoil as the details of her story become more and more vivid.

All For One Theater (AFO)