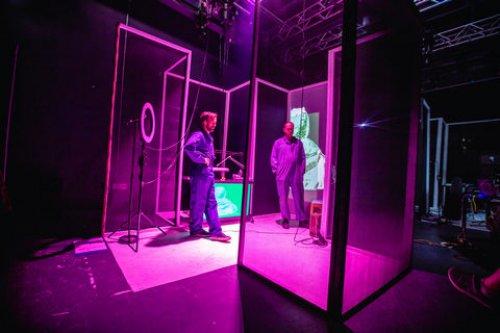 War, time and death are hauntingly explored in the eerie high-tech performance piece Remnant, a company project by Theater Mitu. It’s based on interviews with a cross section of people that have been shaped into a swirling and absorbing event. The audience wears headsets as they experience the show while watching the actions taking place inside of three separate “boxes” named A, B and C. Original and previously composed songs including one by Kate Bush are performed to great effect, as are electronic melodies.

Each of the three sequences lasts about 20-minutes, there’s a blackout, the lights come up and the audience moves to view another box. A drive-in movie announcement from a past era, “the show will begin in two minutes!” is heard.

The theater is accented by its black floor and walls and is segmented into three areas with two rows of seats apiece making for a very intimate environment. The boxes are constructed of gray wood with wire mesh over them. Inside are minimal institutional furnishings, production equipment and television monitors. Off to the side are panels where simultaneous to the actions projections are shown or where cast members are to dance or speak. The audience is close to the performers but at the same time distant from them. 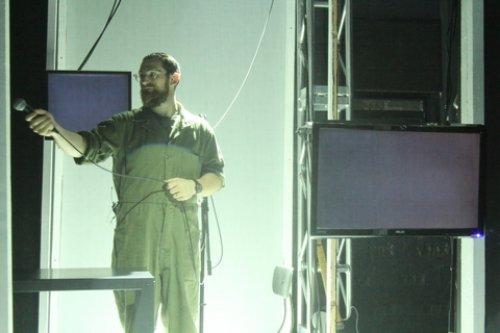 A harshly fractured rendition of “The Star-Spangled Banner” blares while at Box A. It concerns a gay United States Marine Corps private who served in Iraq and Afghanistan. He is responding to interview questions as a vintage reel to reel tape recorder plays on a desk. “Have you killed anybody? That’s the number one question I’ve gotten. Have you killed anybody?”  His husband is nearby and silently interacts.  Interwoven are the statements of others who fought in wars. Characteristically oblique, it is the most visceral portion due to the direct treatment of the raw subject matter.

There’s a whimsical yet sober tone to the relatively light-hearted Box B. It’s a meta recreation of an old-time radio program making mention that we’re watching Remnant. The Mahabharata, Egyptian beliefs and the story of King Arthur are cited in passing and vintage television commercials are shown.

An abstract hospital setting is the dreamy landscape of Box C where illness, dying and medical intervention are profoundly depicted.

Remnant is a presentation of Theater Mitu, a company founded in 1997 that “is committed to challenging the parameters of theater research and practice.” They have performed extensively around the U.S. and internationally. 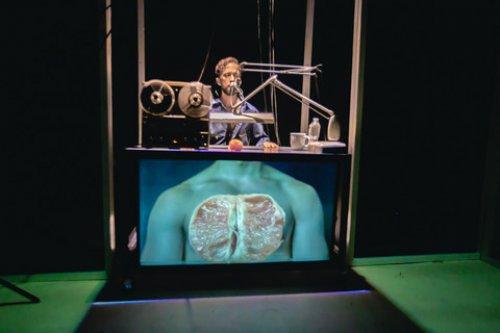 The troupe’s founding artistic director Rubén Polendo is its director and his swift staging richly realizes each individual chapter with resonance. Mr. Polendo coordinates the piece’s high caliber technical elements and engaging performances into a production that totally stimulates the senses and the mind.