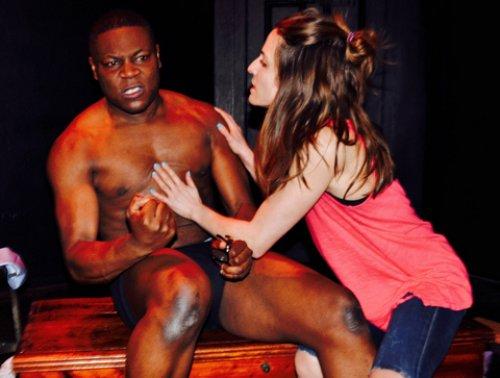 Obi Abili and Sarah Kate Jackson in a scene from Paul Calderon’s “Master of the Crossroads” (Photo credit: Joanna Pickering)

Initially reminiscent of Beth Henley’s quirkiness then veering off into Flannery O’Connor’s gruesomeness, playwright Paul Calderon’s Master of the Crossroads is a wild contemporary Southern Gothic tale coupled with sociological themes. The fierce cast of three acts up a storm to great effect, the events are compelling, and the grotesquely ritualistic finale is unsettling.

“Please note that this production features nudity, racist language and graphic violence in a very intimate setting.” This “Trigger Warning” is accurate on all counts particularly noting the contained space which magnifies the play’s brute force.

We’re at the Baton Rouge, Louisiana, apartment of church-goer Jim-Bo. He is an African-American Iraq war veteran in his late 30’s. Yolanda, the white ex-wife of his fraternal twin and ex-convict brother Cornbread who also served in Iraq has to visit due to a crisis. Through exposition and a phone call we learn that Yolanda went to Cornbread’s apartment to bring him his medication. He has a “Spanish man” mistakenly believed to be “an Arab” tied up in the bathroom and intends to crucify him as restitution for the aftermath of the war.

Jim-Bo then arrives at Cornbread’s ramshackle apartment finding him boozed up, running around naked with a gun and ranting. From behind the bathroom door we periodically hear the blood-curdling howling of the unfortunate captive. The two brothers thrash out their feelings as Jim-Bo strives to reason with Cornbread about letting the hostage go. Yolanda shows up and the conflicts intensify as these now involve the couple’s two children. 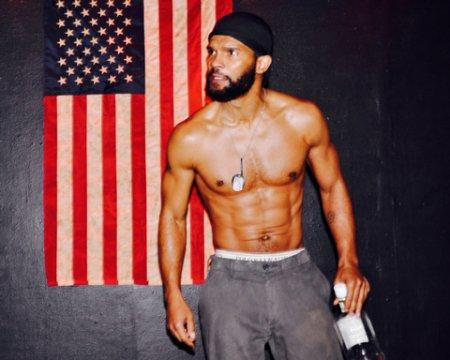 Nixon Cesar in a scene from Paul Calderon’s “Master of the Crossroads” (Photo credit: Joanna Pickering)

Appearing mostly in only white boxer briefs after being briefly nude in semi-darkness, the highly athletic Nixon Cesar’s visual élan is matched by his strong-voiced, galvanizing acting. Though wired up and threatening violence, Mr. Cesar beautifully suggests the humanity behind the mania.

Spanish man! Too many of em here, now. Taking over some of the jobs some of our youngems’ could be good for. Summer jobs. Winter jobs too. Plus, hell, maybe he a member of one of these drug cartels, or slave traffickin’ rings. 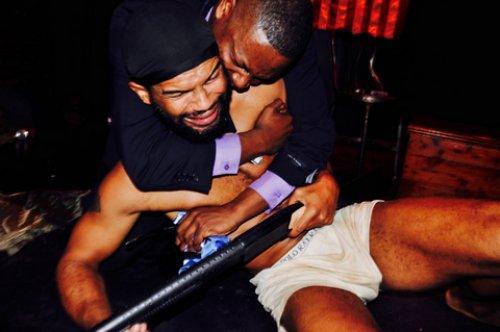 Obi Abili and Nixon Cesar in a scene from Paul Calderon’s “Master of the Crossroads” (Photo credit: Joanna Pickering)

It damn sure is what you ‘tempting! I can read yo’ thoughts, Jim-Bo! And they as clear as horseflies buzzing ’round a slab of beef rotting in the sun.

Amidst the flamboyance, Mr. Calderon significantly explores topical issues. The depiction of post-traumatic stress disorder, the eternal dramatic clash between brothers and the plight of the underclass are all vividly realized through his markedly delineated characters.  His heady dialogue laces the vernacular with shrewd insights. The final scene arguably gets carried away with symbolism and luridness but what came before has been quite stimulating.

Calderon also directed the play and his vigorous staging complements his material using the claustrophobic space for optimum effect. There’s a lot of finely choreographed movement and ferocious fight sequences. “Mary Don’t You Weep,” the 19th century spiritual, is replaced by shimmering Vivaldi as the only light on the dark stage comes from Yolanda’s vape pen, all making for a cool opening bit.

Technically the production is small in scale, but its elements achieve high caliber theatricality. The disparate music is crisply balanced imparting the desired sense of increasing doom. Darkness abounds once we’re at Cornbread’s debris-strewn place and a small glowing Jesus is a scary addition. Scenically there’s just basic furnishings with a witty flourish. At Jim-Bo’s a cross hangs on the stage’s back wall and when we’re at Cornbread’s it’s been replaced by an American flag. This looms over the actions as a subtle commentary.

Master of the Crossroads (through February 9, 2019)