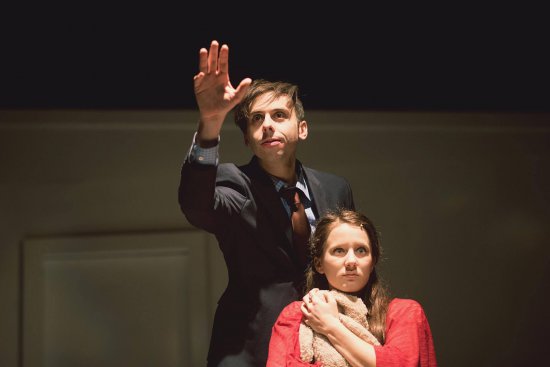 Josh Bardier and Erin Kommor in a scene from “Interview: A New Musical”

Convoluted, confusing and pointless, this overwrought tale of the psychological examination of a serial killer with multiple personalities might have made for a interesting dramatic thriller along the lines of Agnes of God.  Instead, Interview: A New Musical, is a musical.

The show “…made its world premiere at Soo Hyun Jae Theatre in Seoul, Korea, in September 2016, and then ran to sold-out crowds in Kyoto & Tokyo.”  It has not traveled well to New York City.

Composer Soo Hyun Huh’s original music is a fine and eclectic assortment of modern melodies. The English lyrics are written by Bryan Michaels.  The combined results are stilted and pedestrian. The score is primarily sung dialogue with some actual if indifferent songs.  Mr. Michaels has also translated Jung Hwa Choo’s book into English.

The plot is a circuitous set of twists and turns involving a male author of thrillers interviewing a nerdy, young prospective male assistant.  One of the author’s best sellers is about “The Ophelia Killer,” a culprit who drowns young women after dressing them up as the Shakespearean character.  There are also allusions to Edgar Allen Poe during the show, and a parallel story of a psychiatric doctor examining the killer.  The show’s other character is a young woman who often runs around with a stuffed rabbit and is a key to the mystery. 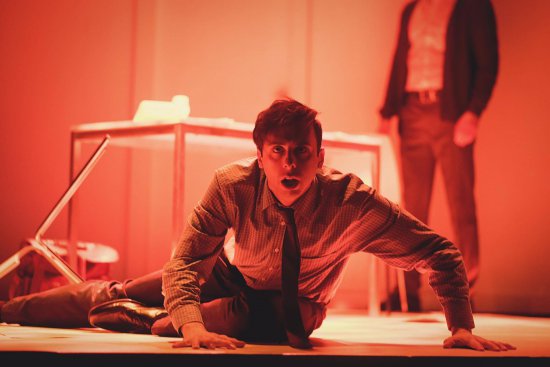 Josh Barrdier in a scene from “Interview: A New Musical”

As the interview proceeds, startling revelations about these individuals are disclosed.  In flashbacks we find out about a murdered young woman who is integral to the plot.

Handsome and possessed of a deep, smooth voice, Adam Dietlein has the talent, presence and bearing of a musical theater leading man.  Indeed, in the program there is a congratulatory insert heralding his impending joining the cast of the Broadway musical Beautiful.  Here he admirably plays the psychologist with a straight face, which is difficult considering the volume of clichéd pyschobabble he has to utter.

Exhibiting tremendous energy and focus, Josh Bardier is a whirlwind of physical force as the young man.  Mr. Bardier contorts himself and alters his voice and manner to portray the various personalities inside the character’s head.  It’s a grand and commendable performance though each is depicted so briefly that Bardier can’t really make much of an impact with them.

A print out with drawings and descriptions of each of these personalities is on the theater seats for the audience.

The lovely and charming Erin Kommor valiantly appears as the girl from the past.  Ms. Kommor sweetly sings several moody solos and gamely carries the stuffed rabbit as she scurries through the action as if she’s a heroine in a Gothic novel. 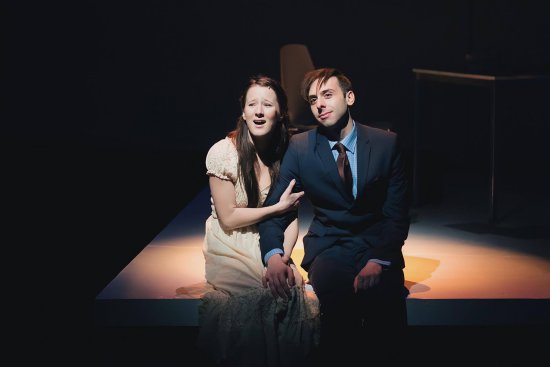 Erin Kommor and Josh Bardier in a scene from “Interview: A Ne Musical”

Co-directors Dimo Hyun Jun Kim and Yossef K have a firm grasp on the action sequences and inject steady pacing that aids in making the show visually interesting.

Scenic designer Kyu Shin’s striking white set is a raised platform that serves as an office.  Jagged, asymmetrical walls surround it.  On the sides below are playing areas where flashbacks and fantasies take place.  It’s all atmospherically chilly, and serves the material very well.

Byung-Chul Lee’s accomplished lighting design conveys the requisite spookiness and clinical brightness.  The sound design by Tae Jong Park at times is heavy on the volume and at times causes the performances to seem exaggerated.  Laura Mae Baker’s costume designs are basic and suit the characters.

There have been musical spoofs with grisly subject matter such as Silence! The Musical!, based on Silence of the Lambs.  Interview: A New Musical however is deadly serious and just doesn’t jell as such.  It is possible that it plays better in Korean.