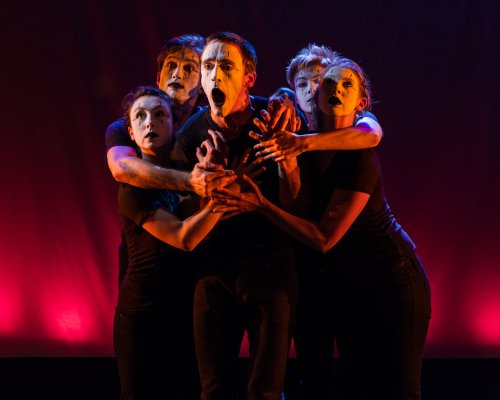 This engaging full-length program of mime sequences is terrifically performed by a troupe of seven highly talented practitioners. Ardent enthusiasts of the genre will be enthralled.  Most anyone else will periodically get restless.

Presented by the acclaimed Broken Box Mime Theater, See Reverse consists of ten short pieces with some even shorter vignettes sometimes in between.  Lasting close to two hours with an intermission, it’s a lot of mime.

The dazzling, diverse company is comprised of Nick Abeel, Baumwoll, Duane Cooper, Géraldine Dulex, Blake Habermann, David Jenkins, Marissa Molnar and Matt Zambrano .  They’re classically dressed in all black, with white makeup with black highlights.  At times there is the dimension of modern dance due to their exceptional movement abilities.

Physically limber, facially expressive and immensely personable, they perform a variety of characters, situations and emotions. Except for some black wooden cubes on the bare stage, this is all done without scenery or props, and, of course, in silence.  Eclectic musical scores recorded by mostly indie artists accompany their appearances. 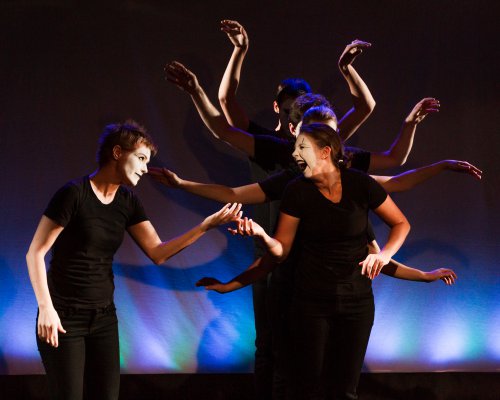 The show’s title refers to the rectangular insert in the program that lists the names of the pieces.  Five on each side, “see reverse.”  During the production, a performer either holds up a large card with that piece’s title or the title is projected through a calligraphic stencil on the white backdrop of the stage.  These have plots that are open to interpretation.

“The Good Detective” which closes the first act is the most memorable and effective. It’s a mesmerizing film noir scenario with gangsters, law enforcement, double crosses, cigarettes, cigars, dames and shootouts.  The score is a dark, jazzy medley of music by composers Kevin MacLeod, Sergey Cheremisinov and the band The Hush.

“Communion” is an epic tale with religious imagery including a church scene where communion wafers are passed out and consumed.  It’s done to a Brahms requiem conducted by Herbert von Karajan.

“The Ruckus and the Well” is a dreamy, Martha Graham-style fable about a princess, set to a pulsing mix of contemporary electronic music by Cameron Orr and Oskar Schuster.  Filled with symbolism, it has one performer depicting a clock, with his arms moving as the hands. 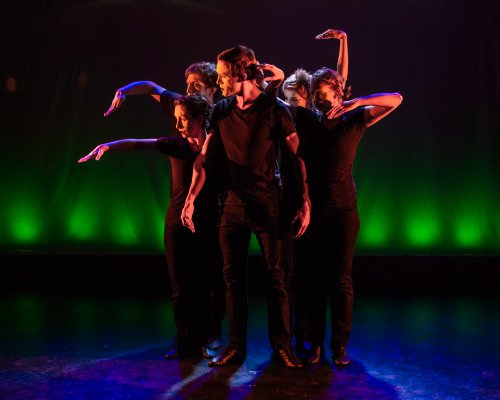 The framing device of the presentation is “Plainview Community Players.” It’s a silent film-style slapstick delight that retells Romeo and Juliet.

Many of the sequences are simply comic exercises or intriguing ciphers with varying degrees of entertainment.  All are accomplished, but their impact is arguably lessened by the amount of them.

See Reverse combines superior exhibitions of mime, fascinating episodes and  flawlessly presentation.  It is, though, a case where less could have been more.