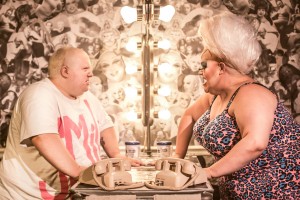 “I’m tired of being a prisoner in a sequined tube dress,” declares actor Glenn Milstead to his legendary alter ego Divine. “The drag queen of the century is relegated to the closet” is Divine’s angry response to Milstead’s aching desire to abandon his successful persona in favor of pursuing his dream of being a character actor.

These exchanges take place in author E. Dale Smith’s harrowing play Divine/Intervention. It is a fascinating biographical fantasia set in a Los Angeles hotel room during the John Waters cult movie star’s last hours alive. The next morning he was due to appear on the set of the sitcom Married with Children to film his guest appearance as Uncle Otto. Audio recreations are heard of news bulletins and of interviews with Tom Snyder, Terry Gross, and others who put the story in context and impart exposition.

Imaginatively conceived, passionately written, and well structured, Mr. Smith’s play dramatizes the clash between the actor and his creation.   Fueled by marijuana and cake, the two battle about the future of their life and career while reenacting past events during many compelling flashbacks. It is a shattering behind the scenes of show business exploration that demonstrates the toll such a career can take.

Harris Glenn Milstead (1945-1988) was born in Baltimore and became a drag performer. He met and befriended director John Waters and the two collaborated on several modern cult classic films such as Pink Flamingos, Female Trouble, Polyester, and the mainstream musical Hairspray, where Milstead appeared in a variety of outrageous female roles in flamboyant costumes. In some of these he appeared as a man as well and later in his career he played a gay male gangster in Trouble in Mind.

The theatrical conceit of having two actors separately portray both facets of Milstead is richly realized by the powerful performances of Ryan Walter and Bobby Goodrich. As Milstead, Mr. Walter superbly conveys the gentleness, ambition, and emotional complexities of this gay overweight lost soul. Mr. Goodrich fiercely and commandingly replicates the looks and mannerisms of Divine and also deftly performs some of his disco numbers that were part of the star’s nightclub appearances around the world. The chemistry and inspired teamwork of these two excellent actors is an integral aspect of the show’s success.

Braden Chapman is known for the drag character Mimi Imfurst and appeared on Rupaul’s Drag Race. He conceived the original concept of the show and directed it. His arresting vision is on display with vibrant and hallucinatory staging where fantasy converges with reality. The small stage is cleverly utilized and the sight of the two large performers interacting is visually striking.

Also in the cast are three actors portraying multiple roles. Terrell M. Green is outstanding as a bartender who was one of Milstead’s great loves as well as a sympathetic drag performer at a Tallahassee nightclub. Cosimo Mariano charmingly plays Divine’s opportunistic British manager, a well-meaning assistant, and a hotel employee. Nicholas Scheppard does a hilariously sly John Waters impression and is sternly supportive as Milstead’s father.

Mark A. Dahl’s fanciful set design is a minimalist room adorned with black and white photographs of Milstead and Divine throughout their lives that expertly serves as various locations during different time periods. J. Kenneth Jordan’s lighting design boldly enhances the show with its sense of shifting eras. Divine’s famous skin-tight animal print dress and all of the other detailed garments are the superior work of Bobby Fabulous Designs.

“I was happy to get out of Baltimore. Little did I know that it’s ALL Baltimore!” poignantly observes Milstead in one the more reflective moments of this very moving and dazzling production of Divine/Intervention.