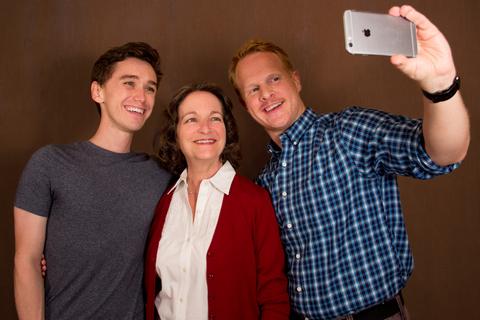 Playwright Andy Halliday returns to Theater for the New City with Up the Rabbit Hole, an emotionally laden play about a young gay man struggling with drug and sex addiction in New York City, that notorious wonderland where both temptations are plentiful. Drawing on his own life struggles for inspiration, Halliday adds a couple of other fraught issues to the mix as well.

Besides harboring a dwindling dream to become a dancer, thanks to a leg injury, Halliday’s dramatic stand-in, Jack (Tyler Jones), an adoptee, also has to contend with the overwhelming repercussions of having tracked down his biological family, which includes an adult half-brother (Andrew Glaszek) with his own substance-abuse demons. That’s a lot for 90 minutes, and Halliday, despite a valiant effort, can’t keep his play from sinking under the weight of it all.

Director G.R. Johnson is greatly aided in his struggle to fend off a complete collapse by a talented cast, which tenaciously tries to lift the play up and heave it across the finish line. Doing double duty as Jack’s adoptive and birth mothers, Laralu Smith is particularly strong, finding the nuances in Halliday’s writing that allow an audience to distinguish one character from the other and, more importantly, to feel for both of them as they compete for Jack’s affection. It’s too bad, though, that Smith’s efforts weren’t rewarded with another scene or two, so she could round out her portraits of these two women. 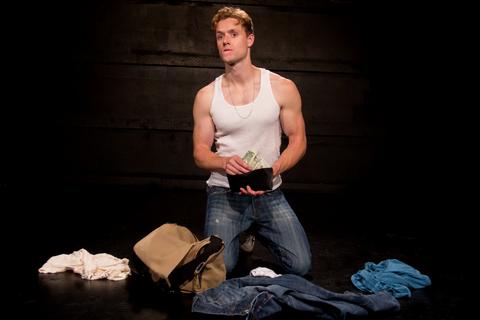 Quinn Coughlin in a scene from Andy Halliday’s “Up the Rabbit Hole” (Photo credit: Kevin Cristaldi)

On the opposite end of the human spectrum, Quinn Coughlin also makes an indelible contribution to Up the Rabbit Hole as Timothy, a muscular, straight-identifying hustler with a sadistic streak and apparently limitless access to cocaine. This latter trait, along with Timothy’s physical beauty, make him an oh-so-enticing bête noire, someone Jack knows he should send away but can’t. Stalking around Jack’s apartment in paranoid, vainglorious fits, Coughlin elicits nothing but dread, so that when Timothy’s bubbling menace does eventually explode it is shocking but not surprising. It’s a nicely calibrated performance whose effectiveness does not require the audience to be caught off guard.

Still, as good as Couglin, Smith, and the rest of the supporting cast are, it’s Jones who leads the way with his sweet-natured, vulnerable turn as Jack. During one intimate exchange, Jack’s middle-aged lover, Robert, (Peter Gregus) calls him “charming,” which, thanks more to Jones than the dialogue he’s given, registers the way Halliday intends it to, as sincere instead of as just something an older man might say to seduce a much younger one. As the play progresses, you keep wishing that Halliday will return the favor, but, unfortunately, when it comes to manufacturing charm, Jones is all too often left on his own.

Despite being a bare-bones production, the actors are ably assisted by the design team, especially Dan Daly whose black-box set is malleable enough to keep the action from flagging too much during the scene transitions. A few wry musical choices from Jacob Subotnick also help to smooth things out. And Joe Thompson’s moody lighting is at its best when the play is at its most traumatic. 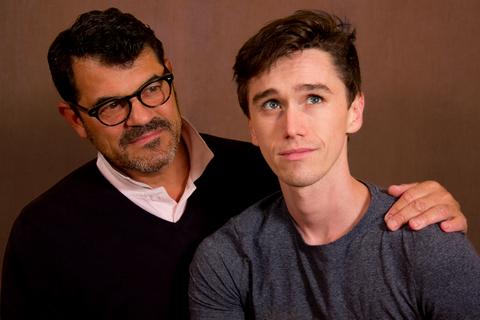 Peter Gregus and Tyler Jones in a scene from in Andy Halliday’s “Up the Rabbit Hole” (Photo credit: Kevin Cristaldi)

A few years ago, Johnson and Halliday brought Nothing But Trash to Theater for the New City. That satire of 1950’s gay teenage culture (which I did not see) probably could gloss over a lot of dramaturgical holes with a wink and a smile. But the stakes are higher in Up the Rabbit Hole, which means the expectations are, too.

The play’s most frustrating line is its last one, “And more shall be revealed!” Halliday is reaching for poignant ambiguity here, but it just feels like Up the Rabbit Hole ran out of script before it ran out of story. Up to this point, we have learned all about Jack’s problems, but we don’t know Jack. It’s a shame, because there appears to be a lot more to know.

Theater for the New City, 155 1st Avenue at 10th Street, in Manhattan