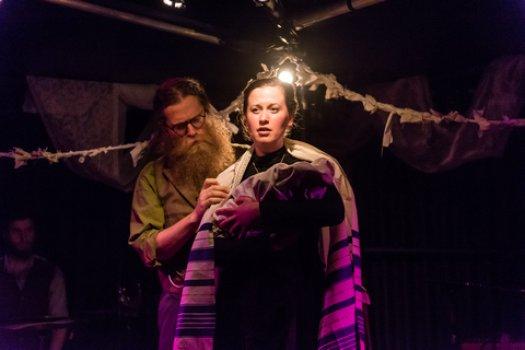 Some events are a challenge to write about or review, such as Old Stock: A Refugee Love Story, an oddball musical that has its charms, but also has an obnoxious lead. The charms are to be found in the lovely story of Chaim (Chris Weathersone) and Chaya (Mary Fay Coady), two Romanian refugees who meet when they get off the boat in Halifax, Nova Scotia, in 1908, created by Hannah Moscovitch, Ben Caplan and Christian Barry with script by Moscovitch.

Any further comparisons with the Broadway musical Come From Away end with the Nova Scotia setting as Chaim and Chaya quickly settle in Montreal where the 19-year-old Chaim marries the 24-year-old Chaya, who lost her husband on the trek from Romania to Russia to escape the pogroms. (Her husband died of typhus, which becomes a recurring theme in the story that unfolds.) To be sure, their tales are “dark” ones, as put together in the play by an apparent descendent Hannah Moscovitch of the real Chaim and Chaya.

With sprightly “Yiddishkeit” songs and Klezmer music by Caplan and Barry, who also directed the musical, the story is overwhelmed by Caplan, who plays “The Wanderer,” sings the songs, and narrates the tale–just as the overly miked singing and electric instruments overwhelm the intimacy of the piece and the Theater A space at 59E59 Theaters.

The Wanderer begins the show by rising above and from within a bright red shipping container, with his purple top hat, lavender jacket and bushy beard, amidst smoke and a spotlight on the otherwise darkened space. It’s an eerie image meant to create “an immersive carnival atmosphere,” according to a script note. Once he descends back into the container, he emerges on the stage from the center, opening two doors which become the sidewalls of the set, cluttered with props. (The set and predominantly dark lighting design are by Louisa Adamson and Christian Barry.) 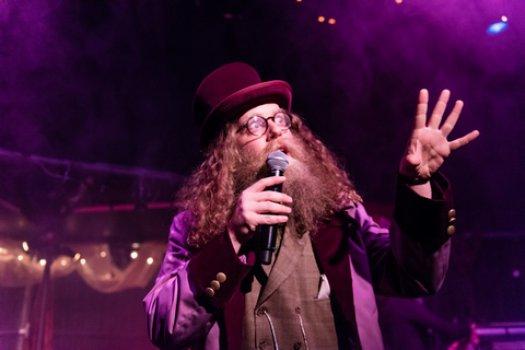 As the “love story” between Chaim and Chaya takes shape, it’s surprising that their marriage seems off to a rocky start, when Chaim seems shy and unwilling to engage in sexual congress–much to Chaya’s consternation. Surprising too is the degree to which Jewish tradition seems to encourage sex among its married members, as the Wanderer eventually recites an incredibly long list of terms describing “the opportunity to know each other in the biblical sense,” including, “adult naptime, beard-splitting, belly-bumping, bouncy-bouncy, interior dick-orating, batter-dipping the corn dog… forbidden polka,” and on and on.

What’s also surprising is the number of times that  The Wanderer states something, only to add that, “This isn’t real,” and then to contradict himself again, saying, “That’s a lie.” It makes for an extremely unreliable guide, navigating us through the long saga of these two Romanian refugees, culminating with a long list of their many offspring: “eight grandchildren and sixteen great-grandchildren.” But in the end, what exactly are we to believe, given the many contradictions in what we’re told?

While the effective and affecting Weatherstone (Chaim) also plays woodwind instruments and Coady (Chaya) plays the violin, they are provided musical and vocal support by Graham Scott (keyboard and accordion) and Jamie Kronick (percussion). And given his long beard and even longer hair, which he eventually rolls up into a ponytail, Caplan resembles nothing so much as an aging, leftover Yiddishkeit hippie.