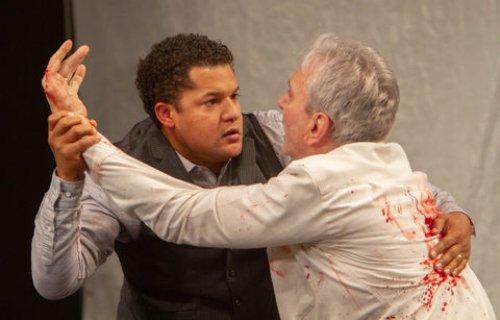 Brandon J. Dirden as Brutus and Rocco Sisto as Caesar in a scene from “The Tragedy of Julius Caesar” at Theatre for a New Audience (Photo credit: Henry Grossman)

Shakespeare’s politically charged Roman tragedy, Julius Caesar, has always been a touchstone for inflaming emotions. In earlier times, monarchs used to ban the play when uprisings were imminent. In the 1930’s, the play was presented as an anti-Fascist rallying cry. In our own era, it has been presented with various American presidents as the stand-in for Caesar. While Shana Cooper’s production for Theatre for a New Audience here called The Tragedy of Julius Caesar is vigorous, lusty and lucid, it offers no political point of view. We never understand why the conspirators want to get rid of Caesar or what they want to replace him with instead.

First seen in 2017 at the Oregon Shakespeare Festival in a slight different version, this production may be best for people who have never seen this play before as it is clear in its plot lines and direct in its language. Using Raquel Barreto’s contemporary costumes, the play demonstrates how well it can work set in our own time. However, Cooper’s modern dress staging is uneven: some scene work beautifully and others don’t work at all. The opening sequence in which the populace celebrates the Feast of Lupercal, all in masks and costumes and dancing across the stage, is a brilliant introduction to the populace of Rome. The scene in which the mob comes across Cinna the Poet and murders him as they seek Cinna the conspirator has all of the emotion and horror that the rest of the production is missing.

On the other hand, the scene in the Senate chamber where the seven conspirators murder Caesar doesn’t work at all: are we to believe there were only eight senators, seven of whom were conspirators? Later in the play, we are told 100 senators have been put to death. Did they all know to stay home on that day? The battle scenes are exciting with choreographed violence but it’s impossible to know which side is winning the conspirators or Octavius Caesar and the triumvirate of Roman consuls. Brutus’ oration to the crowd after the death of Caesar is staged so that he is about two stories up on the walls above the populace almost as though he is hiding from them when he tells them that he had just done them a favor in killing a tyrant. Obviously concerned that there are so few women in the play, Cooper has various wives appear silently in scenes where they normally do not appear but this seems forced as they are given nothing to do. 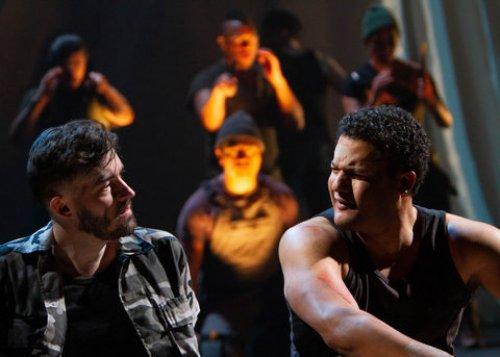 Matthew Amendt as Cassius and Brandon J. Dirden as Brutus in a scene from “The Tragedy of Julius Caesar” at Theatre for a New Audience (Photo credit: Henry Grossman)

Sibyl Wickersheimer’s setting is also problematic. When the audience arrives, they are looking at two walls with huge cracks and other sections of either canvas or plastic. The suggestion is that the problems in Roman society have started long before Caesar’s return to Rome. When a piece of one wall conveniently falls down without hitting anyone, one spends the rest of the first half waiting for more pieces to fall. For the second half mainly concerned with the confrontations and battles out in the fields surrounding Rome much of the set has disappeared, but now there is a huge structure in the rear center stage wrapped in canvas. Is this a statue that is no longer to be worshipped or seen? We never know as it is neither referenced nor referred to in the course of the last two acts which make up the second half. Many of the scenes have actors carrying around five gallon construction buckets with them but their purpose confusingly changes in each scene (property supervision by Andrew Diaz). Conversely, Christopher Akerlind’s lighting design often adds the atmosphere that the production and the set design lack.

The actors appear to be well cast but few of them hit their mark. Rocco Sisto’s Caesar is avuncular but worried like a CEO with a loan coming due. However, we don’t know what it is the conspirators have against him: Is he a tyrant? Does he want to be king? Has he made bad decisions? We are never made aware of any of the answers. As his wife Calpurnia, Tiffany Rachelle Stewart plays her like a trophy wife but there is no evidence in the play that this is so.

As Brutus who is ostensibly the tragic hero of the play (Caesar disappears after the end of the third act in this five act play), Brandon J. Dirden seems to be carrying the world on his shoulders but other than being a meditative thoughtful guy, we never understand what is troubling him. In her one scene with her husband, Brutus’ wife Portia (played by Merritt Janson) is so over the top she unbalances the play but shows us what Brutus and the others ought to be doing. Matthew Amendt’s Cassius convincingly has the “lean and hungry look” that Caesar remarks on but does not do a great deal with it.

The company of “The Tragedy of Julius Caesar” at Theatre for a New Audience (Photo credit: Gerry Goodstein)

Memorably, Stephen Michael Spencer’s Caska, one of the other conspirators, gives so virile a performance that he becomes the hero of the play. His hearty physicality commands attention in any scene in which he appears and he seems a good deal more important than in previous productions. Jordan Barbour’s Marc Antony, on the other hand, is neither the athlete nor the scholar, and his funeral oration over the body of the dead Caesar is so studied that it seems like a prepared speech not one given extemporaneously since he had no previous knowledge of the conspiracy.

While Shakespeare’s Julius Caesar creates its own problems for directors since the title character disappears a little more than half way through the play, director Shana Cooper has not solved all of the problems she has set for herself. Without a vivid interpretation as to why the conspirators believe that Julius Caesar is a tyrant and must be eliminated, the play is just a huge historical pageant with famous names. Clear and direct in its storytelling, this Caesar has not quite made up its mind as to cause and effect. What is clear, however, is that the play proves that the ends do not justify the means and that if you unleash the wind, you will reap the whirlwind.

Theatre for a New Audience

Running time: two hours and 50 minutes with one intermission