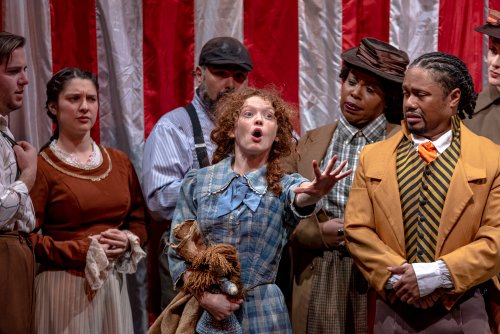 Staci Stout and the cast of the new musical “The Giant Hoax” at Theatre Row (Photo credit: Brian E. Long)

In IndieWorks’ staging of The Giant Hoax, a young and penniless Emily (Staci Stout) with flights of fancy about elves, fairies, and trolls, runs away from home to see the famous petrified Cardiff Giant on display in an 1869 exhibit created by charlatan William “Stub” Newell (Forest VanDyke).

The book, music and lyrics by Kit Goldstein Grant create an imaginative, clever and charming story loosely based on real events. The show opens to a shadow pantomime of Jack and the Beanstalk behind a circus tent, with Newell egging audiences on to come see his real Cardiff Giant, naysayers notwithstanding.

Unable to pay the fifty cents to see the Giant and convinced her mother would be better off without her, Emily convinces Newell to take her on as his assistant, to help run his show in exchange for all the wondrous glimpses of the Giant she wants. Newell warms to Emily and lets her sleep in the tent with the Giant, with whom Emily strikes up an imaginary relationship. Newell trains Emily to bark for his successful show, and all is well until the nefarious P.T. Barnum (Paul Aguirre) shows up, tries to buy the Giant and fails, then copies the giant for his own show and publicly accuses Newell’s Giant of being a hoax.

Since your stone is fresh / you were never flesh / you’re a fake! You’re a Phony! You’re a Fraud! 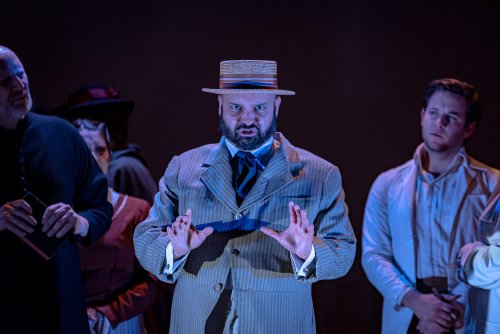 Ben Tostado and the cast of the new musical “The Giant Hoax” at Theatre Row (Photo credit: Brian E. Long)

When Emily overhears a conversation between Newell and Barnum that the Giant isn’t real, she is confronted to tell the truth, by her own conscience, by her imagined visits from her mother, and from imaginary visits from her new friend the Giant himself.

Ms. Stout as Emily is an utter gem; her petite frame and girlish quality are perfect for the role, yet her acting maturity and adult singing talent give Emily a richness and depth of character no child actor could hope to achieve.

“Stubby” Newell is a shyster to the core but not without a soul, and VanDyke plays him with just the right balance of showmanship and heart, singing his songs with a bright, resonant voice that’s pleasing to the ear.

Emily is visited in her mind several times by her worrying mother (Robyne Parrish), whose graceful beauty and nurturing wisdom are well complemented by Parrish’s natural warmth and rich, vibrant soprano. 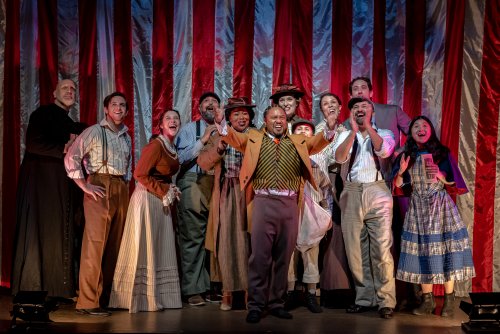 Forest VanDyke and the cast of the new musical “The Giant Hoax” at Theatre Row (Photo credit: Brian E. Long)

Aguirre’s Barnum is a blustery trickster you love to hate but who does earn a few grins, singing his gusty songs with a strong bravado.

Special mention goes to the humor and singing talent of Daniel Moser as the Giant, as well as to Mary Albert and Jianzi Colón-Soto who operate the Giant’s arms; all three indispensable in providing the subtle, seamless dialogue/eye/hand coordination that makes the Cardiff puppet worthy of any Julie Taymor production.

Theron Wineinger’s scenic design is creative and well thought out, providing an appropriate setting for this story. The lighting design by Conor Martin Mulligan perfectly complements the setting, and employs a clever use of footlights from the apron to emulate an accurate and sometimes sinister sideshow element. The costume design by Tyler Carlton Williams is spot on for the period and socio-economic standing of the characters.

The Giant Hoax is a charming morality tale about telling the truth and growing up. The expert hands of director Christopher Michaels and choreographer Molly Model are clearly at work in all aspects of this production, bringing a touching story with affable songs and clever lyrics to life with a cast of first rate actors, a fine ensemble, and inventive and humorous choreography. This show will never get any bigger than it is, but it’s big enough to fill the hearts of its audience to bursting, as long as actors of this production’s caliber are playing it.

Theatre One at Theatre Row, 410 West 42nd Street in Manhattan