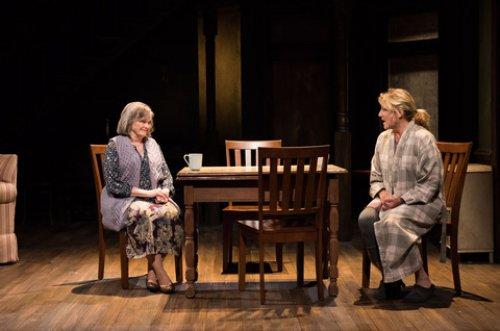 Blair Brown and Mary McCann in a scene from Simon Stephens’ “On the Shore of the Wide World” (Photo credit: Ahron R. Foster)

Although playwright Simon Stephens has credits in Britain going back to 1997, he wasn’t discovered in the U.S. until 2010. Since then New York has made up for lost time: Bluebird and Harper Regan (Atlantic Theater Company), the National Theater of Great Britain’s production of The Curious Incident of the Dog in the Night-Time (five Tony Awards including Best Play), Punk Rock (MCC Theater), Manhattan Theatre Club’s commission of Heisenberg (New York City Center Stage II and Broadway’s Samuel Friedman Theatre) and now Stephens’ 2005 family drama, On the Shore of the Wide World. While Stephens’ plays are very different from each other, they all seem to have the same major theme: the fear of the unlived life.

In Neil Pepe’s absorbing production, On the Shore of the Wide World is a leisurely telling of a three generational drama which takes place in Stockport, a suburb of Manchester where the author grew up. It is the sort of place where everyone is restive and dreams about being somewhere else. With stiff upper lip, the men in the Holmes family don’t say much but are breaking up inside: Grandfather Charlie who owns a restoration firm has always drunk too much and it is revealed he abuses his wife Ellen. His son Peter’s reticence is driving his wife Alice away. Grandson Alex is planning to move to London, while his younger brother Christopher bikes to the airport to watch the planes take off.

And then a tragic accident occurs from which no one will ever be the same. Ellen begins talking about selling the house and moving somewhere else; Alice begins seeing a stranger who is linked with their family for coffee and dinner. Peter becomes more silent while Charlie drinks even more alcohol than before. Scares of medical problems, divorce, break ups, prison only add to their worries. Both Charlie and Peter obsess about their parenting but believe they have been better at it than their fathers. Eventually life goes on. 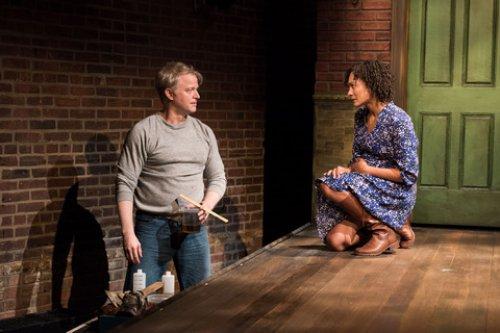 C.J. Wilson and Amelia Workman in a scene from Simon Stephens’ “On the Shore of the Wide World” (Photo credit: Ahron R. Foster)

The play’s structure in its 41 short scenes is a piling up of small details told over nine months in three time periods. On the Shore of the Wide World is challenging for the audience as it does not immediately give up its secret; it requires patience and concentration. Not a lot happens in each scene but eventually we know everything there is to know about the Holmes family. Unlike American dysfunctional family dramas like Long Day’s Journey into Night and August: Osage County, there is no ranting and raving, only the recording of interlocking lives of desperation.

While the British accents vary greatly, the ten member cast has created three dimensionally believable characters that we can recognize. Mary McCann who has previously appeared in the Atlantic productions of Bluebird and Harper Regan is able to reveal the subtext in her mainly innocuous lines as the restive Alice. As her brooding husband Peter, C.J. Wilson is very sympathetic as a man bottling his feelings inside. As the grandfather Charlie, Peter Maloney is very low key and does not play him as a drunk but this may be as a result of the fact that family almost never mentions his problem. As the grandmother, Blair Brown (who appeared on Broadway in the British plays The Secret Rapture and Arcadia) brings a quiet authority to a woman who wants some distance from her possessive husband.

Both Amelia Workman and LeRoy McClain are charming as people whose lives intersect with the Holmeses. Workman plays a married and pregnant publishing executive who employs Peter to restore her home, making all of her mundane lines sound flirtatious. As he played in the revival of Hare’s Plenty, he is again the sensitive other man whom we like enormously but hope he does not end up with Peter’s wife. 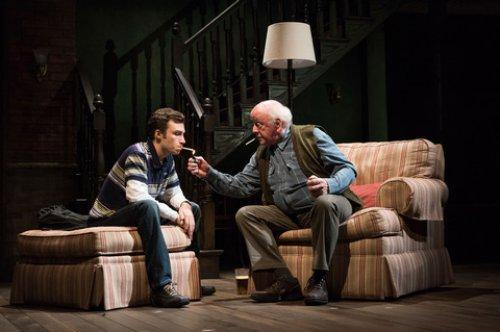 Wesley Zurick and Peter Maloney in a scene from Simon Stephens’ “On the Shore of the Wide World” (Photo credit: Ahron R. Foster)

The younger characters make a more animated contrast to their elders. The decisive Ben Rosenfield’s Alex is growing up more taciturn than his father but thinks he knows what he wants, while Wesley Zurick as his younger brother Christopher is always curious which could lead him into trouble. As Sarah, the girl they both like, Tedra Millan is believable as a girl who always tries to be obliging, but the actress does not have a complete handle on this Midlands teen. In his one brief appearance as Alex’s friend Paul, Odiseas Georgiadis suggests the sinister nature of this wheeler dealer which will become obvious before the play is over.

Scott Pask has cleverly designed a unit set of a house which works for all the play’s locations: the Grandparents’ living room on the left, Alice’s kitchen on the lright, and Alex’s bedroom as well as the deserted and derelict Bluebird Hotel at the top of the staircase, as well as the mansion being renovated by Peter for Susan. The costumes by Sarah Laux totally define the characters at their various emotional states. Christopher Akerlind’s subtle lighting always focuses the viewer on the section of the set in each scene. The original music and sound design by David Van Tieghem helps define the play’s three time shifts.

Neil Pepe’s production of Simon Stephens’ On the Shore of the Wide World will not please all. The pace is consciously slow – like the lives lived by these characters. However, the wait is worth the effort. By the end when the family reunites for Sunday dinner, the play has become both powerful and poignant. The title, incidentally, comes from the next to the last line of John Keats’ sonnet, “When I have fears that I may cease to be,” in which the speaker worries about missing out on love, fulfillment, fame and success, an apt summation of Stephens’ play.