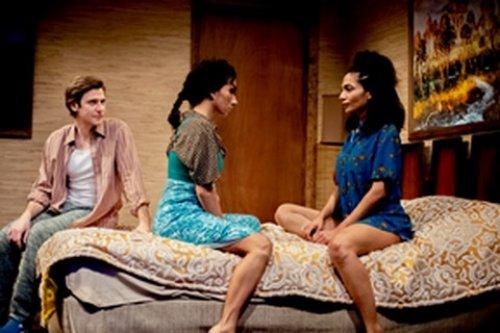 “Why did I marry such an idiot?!” exclaims Deanna about her goofy husband Keaton. Not only is he an inept drug dealer but he has also kidnapped a seal who is presently in human form and her vengeful relatives are now on the warpath. These are the outlandish plot points of playwright Krista Knight’s charming Selkie where mirth merges with darkness.

Found in Scottish folklore, selkies are mythological creatures who transform themselves from seals into humans by removing their coats.  Here, they’re eerily depicted by malevolent off-stage recorded voices and swirling images on an ocean background.

Ms. Knight has a great command of the couple-on-the-run genre and her dialogue is punchy: “This closet is like Fort Knox!” Selkie is not a major opus of dramatic literature but it’s quite likeable and sustains its 75-minute length. Taking place at an unnamed foreign coastal locale, the atmospheric exoticism and pervading sense of doom amidst the comic antics recalls a grim film noir scenario cleverly crossed with fantasy. Besides the vibrant performances, what puts it over is the superlative presentation. 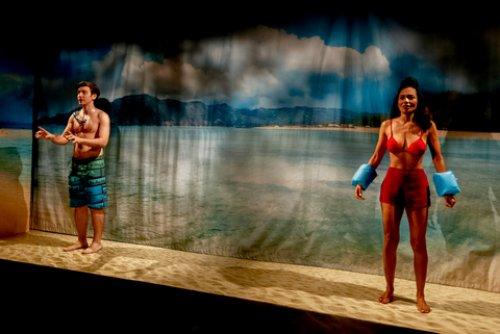 Scenic designer Reid Thompson’s series of minutely detailed hotel rooms employs a gorgeous palette of beige, brown and gold. In front of it is a curtain which ingeniously gets a lot of use as projection designer Yana Biryukova and videographer Vance Spicer’s dazzling view of a beach scene is shown on it and their psychedelic and zany nostalgic pop culture imagery is projected on the stage’s walls throughout the events. It’s a 1960’s-style visual universe with shades of Batman, I Dream of Jeannie and Bewitched.

Knight’s spare stage directions enables director Matt Dickson free rein to create a trippy vision at a smooth pace. The stage curtain is perpetually pulled back and forth to swiftly reveal locations that include the hotel rooms, the beach and a bar. Sometimes it’s half drawn allowing for neat split screen effects. Mr. Dickson’s vigorous staging totally energizes the material and provides a hyper environment for the actors. 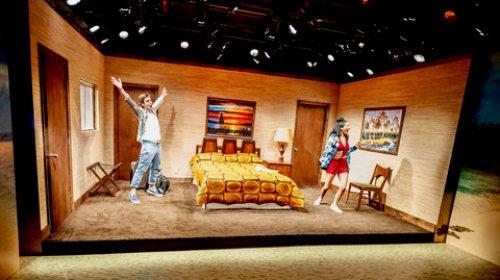 With Christian Slater’s youthful swagger, Jim Carrey’s early mania and his own appealingly distinctive physical and vocal qualities,  the athletic Federico Rodriguez is a magnetic whirlwind as Keaton. Mr. Rodriguez is an emerging classical actor and brings flashes of depth to the frat boy traits as the play reaches its stark conclusion.

Standing on a towel and furiously dancing to the Surfaris’ “Wipe Out” while strung out on cocaine is a highlight of Toni Ann DeNoble’s delightful performance as Deanna. Ms. DeNoble’s compelling manner combines cheeriness and plaintiveness, enriching her daffy yet heartfelt characterization.  DeNoble and Rodriguez have an offbeat though strong chemistry together that carries the piece.

Selkie is a cool and entertaining diversion.

A young American couple who are drug dealers become mixed up with a mythological shape-shifting seal in this far out play that’s dynamically presented.