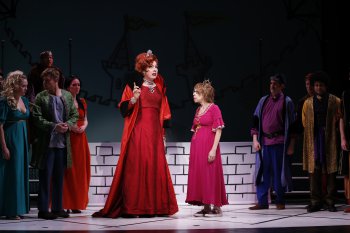 Transport Group Theatre Company, under the direction of Jack Cummings III, has revived Once Upon a Mattress, the musical that made Carol Burnett a star in 1959.  Mattress, with music and lyrics by Mary Rodgers and Marshall Barer and a book by Jay Thompson, Dean Fuller and Mr. Barer, is a slight, pleasant show.  Its songs, though not brilliant, are bouncy and stick with you…for a while.  The book is silly, full of G-rated shtick, some of it groan-worthy.

How, then was Mr. Cummings able to turn Once Upon a Mattress into the campy romp now selling out at the Abrons Arts Center?  Certainly the tour de force performances of Jackie Hoffman and John “Lypsinka” Epperson are a major part of this success, the two leading “ladies” contributing their unique comic gifts to the production.

Jackie Hoffman is famous for her combination of sarcasm and wit in a small, rubber-faced package and John “Lypsinka” Epperson, for his uncanny way of taking lip-synching to the heights of great art.  Hoffman imbues the character of Princess Winnifred with New York street smarts, despite coming from a Swamp. (Well, maybe NYC is a swamp!)  Lypsinka’s Queen Aggravain is, amazingly, the most possessive mother ever and at the same time the most self-involved human in the kingdom.  She does not want her simpering son, Prince Dauntless (the sweetly shlumpy Jason Sweet Tooth Williams), to marry—ever!—but if he doesn’t marry, no one else in the kingdom can, either. 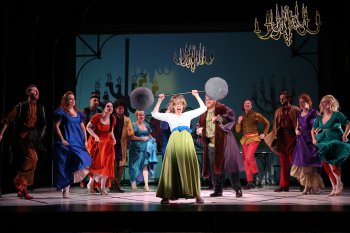 Jackie Hoffman and Company in a scene from “Once Upon a Mattress” (Photo credit: Carol Rosegg)

This means Sir Harry (handsome Zak Resnick) cannot exchange rings with Lady Larken (lovely Jessica Fontana) who, unfortunately, is “with child.”  Their on again, off again romance is the major subplot of the show.

Another subplot involves King Sextimus (David Greenspan) who hasn’t spoken a word for years.  The idea of casting an actor known for his ability to speak a mile a minute as a mute is inspired.

Then there’s the cutie-pie Minstrel (Hunter Ryan Herdlicka) and his pal, the Jester (Cory Lingner) who have their time in the spotlight, the former as the storyteller (“Many Moons Ago”) and the latter as a vaudevillian who gets to shine in “Very Soft Shoes,” a song and dance bit that nearly stops the show.

Aggravain plots with the Wizard (Jay Rogers) to get rid of Winnifred by placing a tiny pea under a pile of mattresses, as in the original tale by Hans Christian Andersen.  If Winnifred feels the pea and cannot sleep, she is a true princess and can wed Dauntless.   The machinations of Aggravain and the Wizard to prevent the marriage keep the plot churning. Winnifred’s way of winning everyone’s heart, (except the Queen’s, of course,) is expressed in the funny “Song of Love” which puts the awkward Princess through her comic paces. 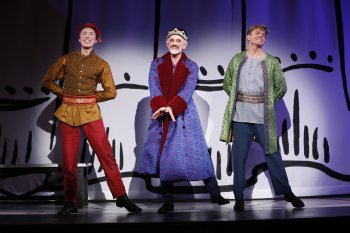 Cory Lingner, David Greenspan and Hunter Ryan Herdlicka in a scene from “Once Upon a Mattress” (Photo credit: Carol Rosegg)

Dauntless falls for Winnifred; Harry and Larken yearn for each other.  The young lovers of the court root for both of these romantic couplings.   The gentle mayhem, choreographed by Scott Rink, of course, results in a happy ending with a few hilarious twists thrown in for good measure.

The fancy costumes by Kathryn Rohe aren’t in synch with the scenic designs of Sandra Goldmark, whose barebones set pieces could use something—hangings, colorful cloth, decorative touches—to keep the mythical medieval theme going.  The backdrop projections, schematic sketches of castles, moats, etc., by Andrew Lazarow are witty, particularly when a hand enters the frame to add little finishing touches, as if a giant is coloring the set.  Paul Huntley’s wigs, particularly those for Lypsinka, are brilliant.

Cummings knows how to pace a show and get the most out of his cast.  There is a purposely ramshackle feel to this production which suits the material.  They are all in on the jokes and are a likeable bunch of performer.

The performances, from the leads down to the chorus kids, are first rate.