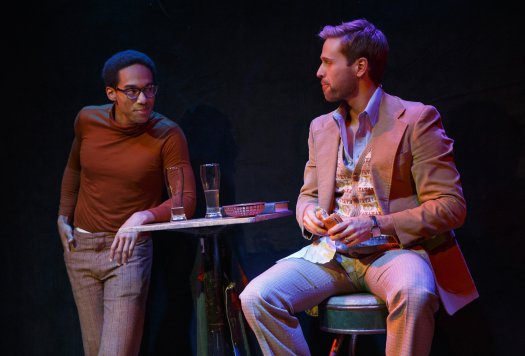 A.R. Gurney, our leading playwright of high comedy, has premiered eight plays at The Flea Theater. So it seems entirely fitting that his latest, the witty, provocative and sophisticated, Two Class Acts: Squash & Ajax, a double bill of college comedies with related themes, should be the work to close the Flea at its original home in Tribeca’s White Street before their move to Thomas Street in the spring. The plays are cleverly linked by the device of having audacious and daring students precipitate crises in the lives of their Greek literature teachers, whether it is sports, drama or politics. Gurney taught literature for many years at M.I.T. so that he knows this milieu intimately. Both directed by Stafford Arima and performed in repertory, they can be seen separately or back to back, but together they make an intriguing evening in the theater.

Squash, the more substantial and slightly longer play, is full and rich enough to be considered a full-length play. Set in and around a university in the Boston area in the mid-1970’s, its hero is socially unsophisticated and naïve Dan Proctor, a tall handsome thirtyish professor specializing in the Classics, who has assigned a paper on Plato’s Symposium, a philosophical text on the many forms of love. In the locker room after his weekly squash game, he is approached by Gerald Caskey, a student in the class, and offered a declaration of love. Telling his wife Becky the story, he omits to say that the student was a man. 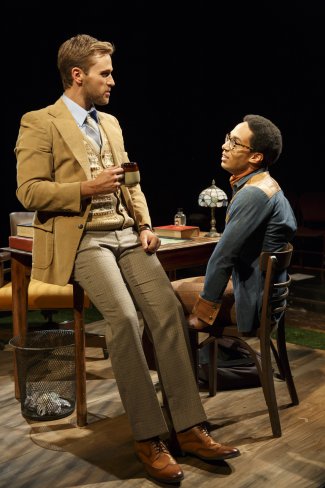 However, when an accusation is made that Dan favors the boys in his class with metaphors drawn from sports and that he calls on them more often, and Gerald offers to buy him a drink (in what turns out to be a gay bar) to discuss his paper, Dan finds his identity shifting to his confusion as he grapples with questions that he has not dealt with before. Sports, sexuality and love suddenly come to the forefront in this witty take on the many forms of personal identity.

Of course, it helps, that when Dan Amboyer as the professor strips down in the locker room, he has a magnificently enviable physique, one that any Greek sculptor would want to copy. He is both charming and charismatic as the young professor who is catapulted into a journey to examine for the first time in his own life questions that he has been discussing in class. As the liberated, worldly student, Rodney Richardson is equally appealing, with an ingenuousness that is refreshing as well as off-putting. Nicole Lowrance as the professor’s beautiful wife makes her an efficient and level-headed mother of three (off-stage) children who is understanding – within her own limits. Arima’s directing keeps the high comedy sparkling at all times.

Jason Sherwood has cleverly solved the design problem of the four locales needed by having the audience sit on the two long sides of the playing area and having the sets side by side in the space between them: the locker room, a suburban kitchen, an academic office, and a local bar and grille. Each set on its own platform is presented on a different floor covering which immediately creates a world of its own. Along with the alley ways between them that the actors travel to and from each area, and the many costume changes by Sky Switser, the sense of time passing is beautifully delineated. Jake DeGroot’s lighting design smoothly and efficiently directs attention to the proper setting at all times. 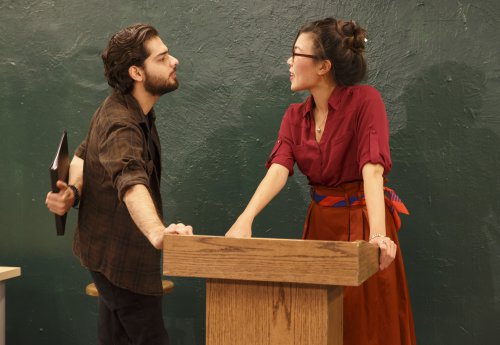 Gurney has often reinvented theater with ingeniously novel ideas. In Ajax, the shorter of the two plays, the audience is the Greek drama class seated in the downstairs theater at the Flea on three sides facing a podium, in Sherwood’s realistic set design. The syllabus for the course is awaiting each person on the desks. The cast features members of The Bats, The Flea’s resident company, in a rotating cast in six combinations that includes Rachel Lin and Olivia Jampol as the adjunct professor Meg Tucker, and Ben Lorenz and Chris Tabet as the drama student Adam Feldman. When the play begins, Meg’s class on Greek drama is interrupted by the new student Adam who asks to write on Sophocles tragedy, Ajax, rather than on the class assignment of Aeschylus’ The Oresteia.

Starting the course three sessions late, Adam wants to write on Ajax as he sees it as about Post Traumatic Stress Disorder and therefore very topical. However, instead of writing a paper, he decides to rewrite Sophocles’ play and update it for our time. This leads to a reading of his play and eventually a production in which Adam asks Meg, a former actress, with whom he has been flirting all along, to appear in it. Adam’s play becomes more political the longer he rewrites it. The rewrites, the production, their relationship all lead to a very ironic ending. 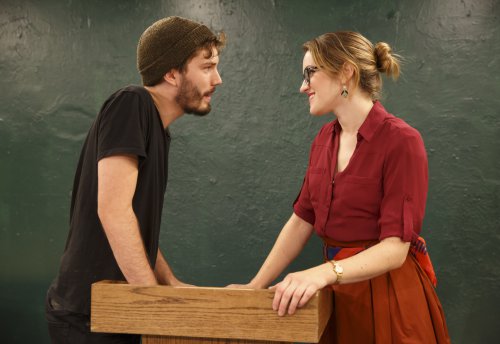 In the performance under review, Olivia Jampol and Chris Tabet played the two characters. Tabet offers a brash, wry charm as the individualist and smart-alecky student, while Jampol’s teacher is both amused and amusing as the authority figure who gives Adam just enough latitude without allowing him to cross a line. DeGroot’s lighting realistically makes use of the banks of fluorescent lights that one finds in classrooms. Switser’s costume changes indicate the multiple classroom meetings.

Whether you see one or both of Gurney’s Two Class Acts, these are provocative plays of ideas on topics of the day. The playwright continues to demonstrate that he has a wise and discerning view of the human condition. Director Stafford Arima has done a beautiful job of obtaining all of the nuances and humor out of the two sharp and intelligent situations. The casting for both plays could not be improved as the actors make their roles their own. The Flea Theater leaves White Street on a high note with two entertaining and superior productions that will close the space with honor and distinction.

The Flea Theater, 41 White Street, between Church Street and Broadway, in Manhattan