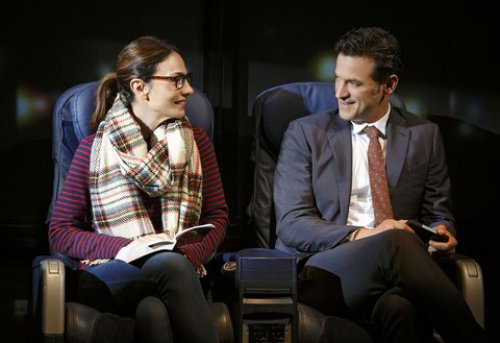 Two strangers, a man, Dexter Reidman, and a woman, Shellie Sayers, meet on a plane scheduled to fly from Chicago to New York on Thanksgiving eve. Both are attractive people. She says she is a Hunter College professor teaching American Crime Fiction and living single. He says that he is an engineer working out of San Diego but engaged to a divorcée with a child in New York.

She is reading James Ellroy. This leads to their speaking of the perfect murder as portrayed in Patricia Highsmith’s Strangers on a Train, most famous in Hitchcock film, in which two strangers agree to swap murders so that the crimes will appear to be motiveless. She describes one of the men as boring and the other one as crazy. Their plane is canceled due to a snow storm and they end up spending the night together. Then they go their separate ways. 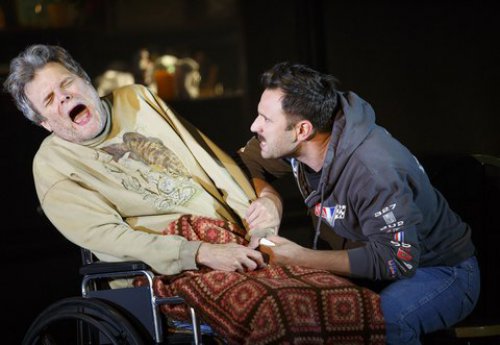 Engaged because he thinks at 40 he ought to be married, Dex can’t get Shellie out of his mind but he discovers that he can’t reach her. We discover that one has lied about everything and the other has told the truth. In the scenes that follow, the stage is split down the middle showing each of the lives simultaneously as in a film edit. Dex hires a private detective to find Shellie. The play builds to their inevitable meeting. It would be unfair to reveal the twists and turns that take place before their next encounter.

Following Bachelorette and Assistance, Leslye Headland’s latest play, The Layover, is a taut psychological thriller told in an updated film noir style. Trip Cullman, who has directed all of her New York productions, has made the play a tour de force of tension and unease. As acted by Annie Parisse, Adam Rothenberg, Amelia Workman, John Procaccino and Quincy Dunn-Baker, the tone is marvelously sustained. The only fly in the ointment is the ending which will take you entirely by surprise and may feel unmotivated. 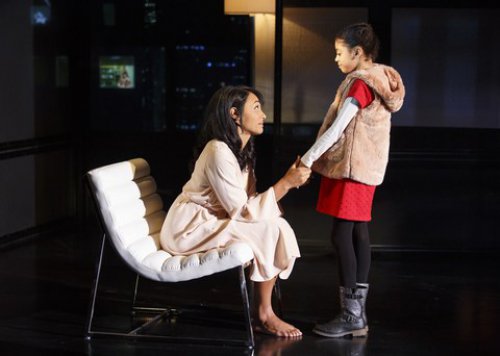 Mark Wendland’s scenic design which uses screens behind the sets to create an ethereal atmosphere, and is enhanced by videos by Jeff Sugg, always hint at more than we see whether it is the airport lounge or a Chicago hotel room. Occasionally Sugg uses clips from film noir classics along with realistic footage of the airport, etc. Clint Ramos uses his costume design to delineate the social distinctions among the characters. The lighting by Japhy Weideman also adds to the play’s film noir atmosphere.

As in all her performances (Becky Shaw, Clybourne Park, Antlia Pneumatica, etc.), Parisse adds a touch of mystery to her intense Shellie. Adam Rothenberg as Dex is a dashing leading man who suggests something sinister in his make-up. As his fiancée Andrea, Amelia Workman has all the earmarks of the pampered privileged woman who always expects to get her way. John Procaccino adds a new level of regret and pain as Shellie’s wheelchair-bound father. Quincy Dunn-Baker makes quite a contrast first as Shellie’s abusive significant other and then as a sleazy private detective. Playing a spoiled 11-year-old, Arica Himmel is totally believable in her casual, off hand manner.

As directed by Trip Cullman, Leslye Headland’s The Layover is a tightly drawn exercise in seduction and suspense that is always engrossing, always unpredictable. The dialogue crackles with rapid fire and snappy repartee and raillery. The play is partly compromised by its surprise ending but that may have been the author’s intention all along. After all, her obvious model is the work of Patricia Highsmith (The Talented Mr. Ripley, etc.) whose novels are exceedingly devious. As her bigger-than-life protagonists, Annie Parisse and Adam Rothenberg command and inhabit the stage as two people who each have a good deal to hide.