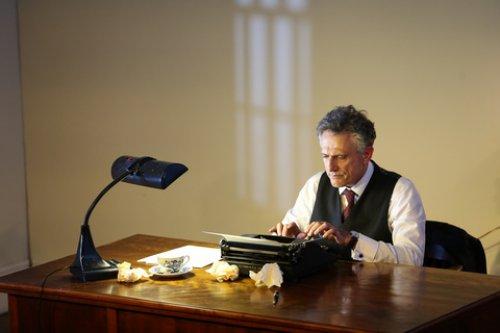 Martha Graham called her dancers “athletes of God.”  Watching David Greenspan perform all the roles in a six-hour marathon performance of Eugene O’Neill’s 1928 melodrama, Strange Interlude, caused me to wonder what I might call David Greenspan.  Would “Son of Thalia” (the Greek goddess of theater) do? “Olympian of O’Neill”?

Forget it!  David Greenspan is simply a one-of-a-kind theatrical creature who has molded a very special career.  This production of Strange Interlude—presented by the terrific Transport Group Theatre Company—is the current cap on a career that is bound to hit many more heights.

Strange Interlude has always attracted stellar casts led by actresses who think of it as their Hamlet:  Lynn Fontanne (1928), Geraldine Page (1963) and Glenda Jackson (1985).  The play is known for its two salient elements:  its six-hour running time and the vocalized thoughts of each character delivered as soliloquies punctuating the script.  (In 1963 these “thoughts” were electronically enhanced.)

Transport Group is using the Irondale Theater Complex in Brooklyn in which scenic designer Dane Laffrey has cleverly placed a huge box which holds two rooms.  The final acts are played atop this box.  The audience is skillfully and efficiently guided from one set to the other. Lighting designer Jen Schriever brilliantly overcame the logistical problems presented by the tiny, closed room settings to achieve changes of mood and place.

The play has aged badly with its heavy-handed stream of consciousness and its use of Freudian symbolism.  The subjects of abortion, adultery and homosexuality were quite shocking in 1928, but time has made these subjects more palatable. 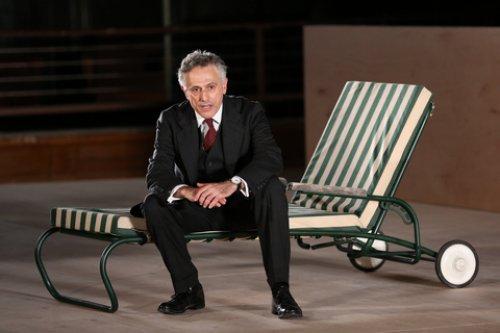 Mr. Greenspan does nothing to either stimulate or prevent nervous giggling at certain lines but just keeps going a full speed, changing from character to character, from spoken line to soliloquized thoughts.  (Some early bewilderment might have been avoided had a list of the characters been provided.)

Mr. Greenspan achieves breathtaking effects by simply changing his voice, his physical stance and his hand gestures, often literally pirouetting from one character to the next.

It takes a while to get into the plot even with Mr. Greenspan’s consummate command of the dialogue.

In 1919, Nina Leeds is mourning the loss in battle of her beloved and sainted-in-memory fiancé Gordon Shaw, a character never seen but one that hangs like a poisonous vapor over the action.

Novelist Charles Marsden, a closet homosexual, has always cared for Nina who winds up marrying Sam Evans, an all-American sad-sack and friend of the late Gordon Shaw. Despite being intellectually dull, Sam manages to become a millionaire.  Nina gets pregnant, but is warned by Sam’s mother not to have the baby.  Insanity runs in the Evans family!

Her abortion is performed by handsome Dr. Edmund (Ned) Darrell who becomes Nina’s lover and who impregnates her with a son whom Evans believes is his own.  This son is named Gordon, after the mythical World War I hero, idolized by all. 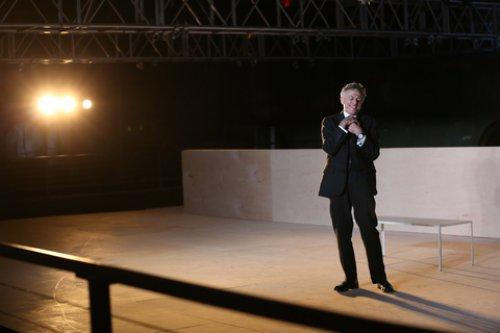 Of course, it’s O’Neill’s intricate and revelatory telling of these interactions and neuroses that give Strange Interlude its landmark status.

Mr. Greenspan is luminous throughout, his energy never flagging.  Once the audience is totally in synch with him, the plot and the character development are illuminated in a way that a full cast couldn’t achieve.  He manages to elevate Strange Interlude into a tale for the ages, like a modern Iliad.

Transport Group’s artistic director Jack Cummings III directs this show with a feeling for pacing and an intimate knowledge of Greenspan’s ability to hold an audience’s attention.  Aside from the “gimmick” of all the characters being played by one actor, Mr. Cummings treats the play as a play.

Just one note of caution: the Irondale Theater Complex is not only inaccessible to wheelchair users, but the show, itself—and the dinner break—involve climbing stairs.  For those who can, it is worth the extra effort to experience this once-in-a-lifetime event.