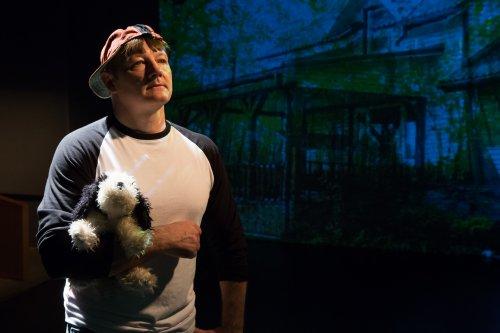 Sober, somber and overall compelling, Outside Paducah: The Wars at Home is a trio of short solo plays that depict the after effects of the wars in Iraq and Afghanistan on U.S. servicemen and their families. It’s well written and quite effectively performed by J.A. Moad II.

In terms of the atmospherically detailed writing and Mr. Moad’s enjoyably intense performance that recalls a Sam Shepard hero, “Quittin’ Meth” is the most powerful of the program and its concluding play.

It’s a poetically expressed evening’s odyssey of a 27 year-old Iraq War veteran who has returned to his Illinois hometown in 2007. Set in a rundown bar in this depressed steel mill neighborhood, we follow his memories of the war that contrast with his present observations and glimpses of the pitiful bar denizens . He encounters a war buddy who lost a leg and has descended into drug addiction.

“Cairo (pronounced K-Row)” follows the mental unraveling of the 51-year-old father of an Iraq War veteran in Paducah, Kentucky, as he is beseeching an unseen bank officer for a business loan. It’s a solidly constructed episode that channels the pathos of Willie Loman begging to keep his job in Arthur Miller’s Death of a Salesman. Moad’s characterization is heartbreaking and his proud bearing has echoes of Big Daddy in Tennessee Williams’ Cat on a Hot Tin Roof.

Not as satisfying as these two works is “Our Ghost” where a 7-year-old boy narrates the harrowing plight of his father who served in Afghanistan, and who returned to rural Illinois, in 2017, with a traumatic brain injury. The Harper Lee-style imagery is potentially intriguing, but Moad has saddled himself with the very difficult task of portraying a child in a serious situation and his performance is not as adept as his other turns.

Injecting an arresting theatricality to the production is Lisa Renkel’s mesmerizing projection design that is projected on the theater’s three walls. These striking images include sights of war, nature, painterly representations of street scenes, and stark brick walls. Moad is visually encased by these likenesses and perfectly complemented by them.

The minimal scenic design is of basic furniture that includes bar stools, benches, chairs and a small stuffed dog. 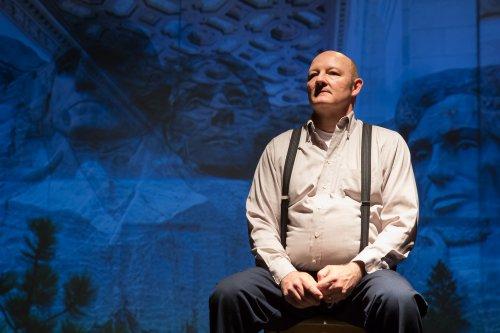 Helen Dillon and Shari Setchell’s costume design ably depicts the three characters. However, these garments apparently haven’t been created with the scene transitions in mind. Moad is seen in dimness after each of the first two plays, taking off his clothes, then in his underwear and cumbersomely changing into his next costume.

J.A. Moad II is a former U.S. Air Force pilot and has a distinguished career as an academic and is not an experienced theater practitioner. Outside Paducah: The Wars at Home is a passionate and fitfully engrossing work that reflects his noble intentions of celebrating those who fought in these controversial and traumatic battles.

Preceding each performance of Outside Paducah: The Wars at Home is “Veteran Voices 2017.” This is a speaking series curated by Poetic Theater Productions, the show’s presenter. Veterans with artistic backgrounds will offer a sample of their work. At the performance under review, former Marine Corps officer and author, Teresa Fazio read one of her short stories.

the wild project, 195 East 3rd Street, between Avenue A and B, in Manhattan