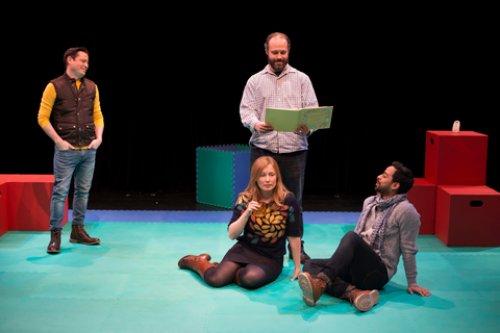 The Baby Monitor by David Stallings is a fascinating examination of how quickly our intimates resort to self-serving, backstabbing deception just when their loyalty is most needed.

That it involves the relatively new phenomenon of gay parenthood gives it an added impact.  That it is written with a thorough understanding of the complexities of gay parenthood vs. conservatives-in-liberal-clothing keeps it constantly edgy.  And, that it has a relatively positive ending makes it a valuable addition to this literature in a season when Michael McKeever’s popular Daniel’s Husband excited interest in a storyline also involving gay marriage, one with a decidedly dire conclusion.

Gay couple Damon (Stallings) and Phillip (Héctor Matias) are parents to a baby, Caleb, born by artificial insemination, via Soledad (Greta Quispe), who is, ironically, the baby’s nanny, a Dominican who had a long term friendship with Phillip back in their home country.

Damon and Phillip’s life in Boston seems idyllic, despite having to overcome quiet opposition to not only their marriage, but their parenting, particularly of a little boy. 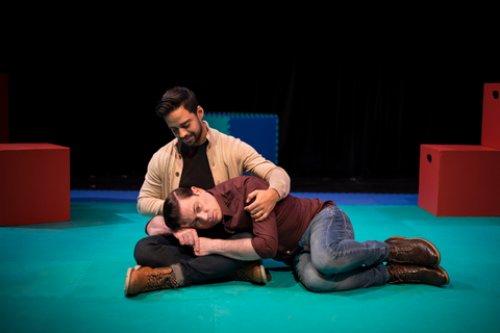 Damon’s cousin and childhood bosom buddy Claire (Amanda Jones) is visiting the married couple with her own spouse Josh (Leo Goodman) for a long-awaited get-together/catching up Thanksgiving dinner during which Damon proudly produces a set of photographs.

One of the photos piques Claire’s curiosity and suspicion:  a naked Damon holding his naked son, Caleb, both quite content, in a shower.  Perfectly natural, except that it touches issues Claire had with Damon’s homosexuality, from his coming out during high school—to very conservative, dysfunctional family—to her ingrained doubts about homosexual parenthood, possibly aggravated by her unreciprocated feelings towards Damon, her youthful intimate companion.

Soledad, the baby’s birth mother, makes an anonymous report to the authorities about what she regards as irresponsible parenting on the part of Damon and Phillip after coming upon them making out sexually.

It’s clear she has ulterior motives, including feeling put upon, having to care for the couple’s child when her own daughter and mother wait for her in New York City.  Even though she was paid exceedingly well for the use of her womb, she harbors strong feelings for Phillip, with whom she converses intimately, mainly in Spanish. 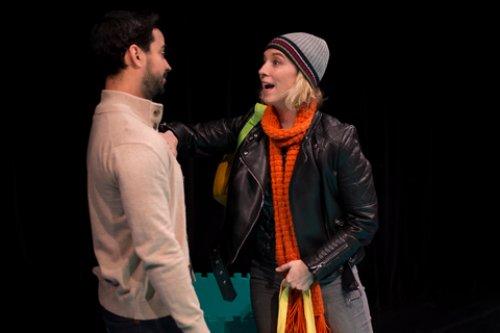 The mess that ensues is irritating and vexing, but Stallings is fair:  every point of view is expressed with honesty, no matter how difficult to understand

Stallings cleverly posits complex past relationships between his character Damon and his cousin Claire as well between Phillip and his fellow Dominican Soledad.  Jealousies, unrequited love and social class tensions raise The Baby Monitor’s complexity.  No one is an absolute villain and no one a straight-forward hero.

All the acting is exceptional, including Goodman as Josh who is the sole voice of reason in the play.  Josh had a liberal upbringing, added to a built-in rationality that balances Claire’s low-key hysteria.  Goodman does a great job.  Jones manages to make Claire un-boo-able, a difficult achievement.

Also involved in this controversy is Shelly, a lesbian social activist who supports the couple’s cause with conviction.  As played by Mel House, she manages to avoid a stereotype and emerges as a truly interested outside party who is instrumental in defending Damon and Phillip. 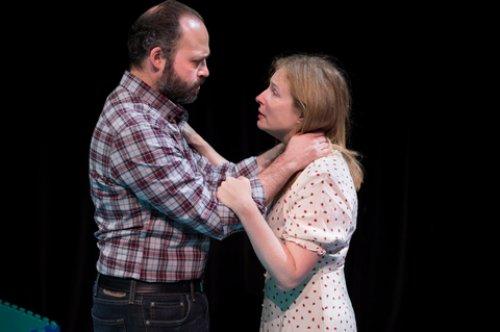 Quispe, given the most colorful, sometimes vulgar, language, also manages to keep Soledad from becoming a stereotype.

Stallings makes a passionate Damon while Matias’ Phillip is cooler, except when dealing with Soledad’s constant complaints.  Both are convincing as a loving couple.

I wish the unattributed set had been more representational, rather than the gathering of colorful cubes rearranged as necessary.  Kia Rogers’ lighting makes the most of the minimal stage and emotional changes in the play.  The costumes, also not credited to a designer, capitalize on everyday clothing to denote character.

Antonio Miniño’s direction not only keeps things flowing, but almost makes up for the lack of a set.  He understands just how to bring out passions and uneasy silences when necessary.  Directing the author couldn’t have been a breeze, but he obviously made sure that all the actors gave their all to Stallings’ words.

Running time:  100 minutes with no intermission