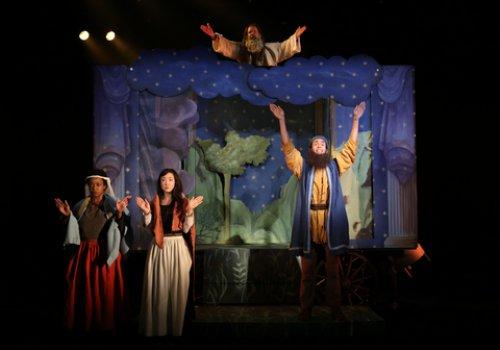 Jordan Harrison’s recent New York plays have each incorporated many themes and gone in many directions. His latest, The Amateurs, being presented by the Vineyard Theatre, is no exception. Ostensibly about a group of actors in 14th century Europe on the run from the Bubonic Plague aka The Black Death, the play tackles the themes of discrimination, relevance of art, prejudice, AIDS, alienation, the plight of the actor, and individuality. Directed by Oliver Butler, co-artistic director of The Debate Society, the six actors use different styles but that may simply be to accentuate that the troupe is a motley crew.

Although performed without intermission, the play breaks into three parts: Act I and III deal with a troupe of medieval actors rehearsing a morality play based on the Biblical story of Noah and the Ark to be presented before the Duke of Travo. Directed by Larking (Thomas Jay Ryan) (who also plays God), they are taught not to show emotion, change words or react to any mistakes that occur. Hollis (Quincy Tyler Bernstine) however dares to ask the question “Why?, that is, what is her motivation and why shouldn’t they ad lib when necessary.

They are also trying to out-distance the Plague which is taking so many of the people in the towns they pass through. Their hope is that if they please the Duke they will receive shelter for the winter and from the plague. It is a long shot as some of the players are dying off like Henry, Hollis’ brother, or getting pregnant like Rona which makes it difficult for her to continue to play two parts at the same time. Enter The Physic, a man on the run, who wants to join the troupe, although he has never acted but can surprisingly sing. 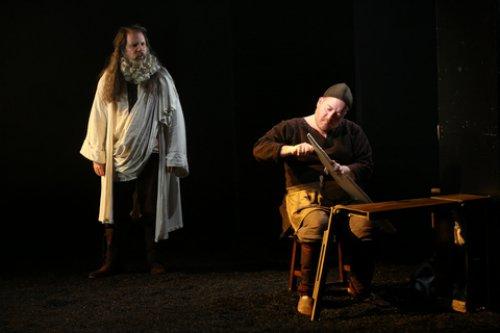 Thomas Jay Ryan and Michael Cyril Creighton in a scene from Jordan Harrison’s “The Amateurs” at the Vineyard Theatre (Photo credit: Carol Rosegg)

Then in the middle part, the play we have been watching abruptly stops and in an example of meta-theater, The Playwright, i.e. Jordon Harrison (played by Michael Cyril Creighton who also plays the simple-minded Gregory in the troupe) appears to give a lecture connecting the Bubonic Plague of the 14th century to AIDS in our own. It then morphs into an art lecture on the changes in painting from the Byzantine, Early and Late Renaissance as an example of the new concept of individuality. Finally, Hollis tells a story of how she turned her role of the faceless Mrs. Cratchit in A Christmas Carol who has no backstory into a real person. While this digression is amusing for a time, it basically tells us things we know already. We have already guessed that the Black Death in The Amateurs is a metaphor for AIDS.

The acting styles vary from passive and unemotional to angry and passionate. As Larking, the head of the troupe, Ryan is both authoritative and impatient. As Roma who finds herself unaccountably pregnant, Jennifer Kim is angry, apathetic and with a chip on her shoulder, while Bernstine’s Hollis, suffering from the loss of her brother Henry to the Plague, is questioning, sullen and distant. Kyle Beltran’s Brom (as an actor struggling to make something of Noah) is suffering from a secret worry. Creighton in the dual roles of the slow-witted Gregory, their prop and set designer who is a genius with his hands, and The Playwright is both deadpan and diffident. Greg Keller as The Physic who joins the troupe along the way is ironic and wry, playing his cards close to the vest, so to speak.

David Zinn’s unit set uses a mound of earth to suggest the troupe’s travels in the countryside or as a metaphor for the mass graves of the Plague years. While it is suitable for the needs of the play it also becomes a bit tiresome for all of the play’s various scenes. It also includes a cleverly designed caravan that opens up to become the stage for the troupe. However, the mask and puppet designs by Raphael Mishler are often very amusing as are the wigs by Dave Bova and J. Jared Janas. The costumes by Jessica Pabst are generic medieval garb in various colors. Jen Schriever’s lighting suggests a world that is lit by candlelight. The original music and sound design with its drum accompaniment becomes a character in the drama. 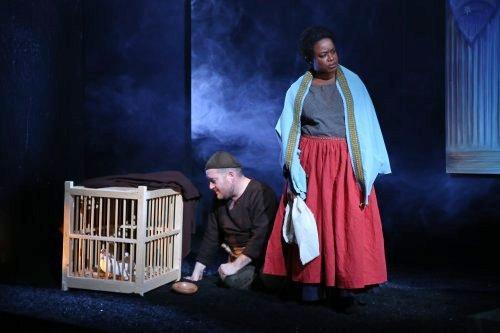 Michael Cyril Creighton and Quincy Tyler Bernstine in a scene from Jordan Harrison’s “The Amateurs” at the Vineyard Theatre (Photo credit: Carol Rosegg)

Jordan Harrison’s The Amateurs is certainly an ambitious new play acted to the hilt by its cast of six. However, at times it bites off more than it can handle, at other times its anachronisms tear at the fabric of its story, and finally it goes out of its way to draw connections that the audience has already made. The play may need a stronger director than Oliver Butler has proved to be to pull this unwieldy drama into more satisfactory shape.