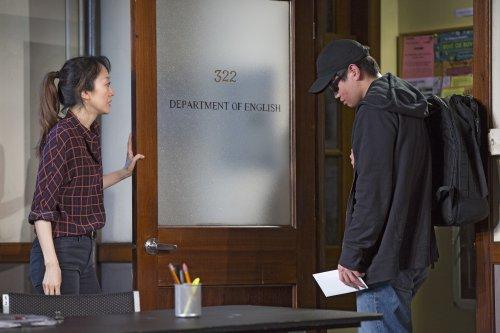 Powerful and disturbing, Julia Cho’s Office Hour tackles the subjects of gun violence, race and disaffected youth. Inspired by the Virginia Tech shootings in 2007, the play investigates a student who writes violence, brutal prose, a loner who remains silent and hides behind a hoodie and sunglasses. His English teachers at an unnamed university campus are repulsed by him and think he is a classic shooter. His current writing teacher of the same nationality attempts to get through to him during her required office hours. Using a technique pioneered by J.B. Priestley, Cho replays the same scene with alternate scenarios. Provocative and thought provoking, Office Hour is certain to be controversial.

In the opening scene with two other instructors, Genevieve and David, former writing teachers of Dennis, they warn Gina, his current teacher, what she is in for. He hands in assignments that are filled with rage and sadism, he scares the other students, and as he is over 18 cannot be compelled to go to therapy. The university’s intellectual freedom policy means he can write what he wants, but Dennis refuses to participate in class and David is convinced he is the source of the poison pen letters that were sent to both the chairman of the department and the dean about him. As they are all adjuncts, if enough students drop their classes, they will not be renewed. Gina, an Asian American just like Dennis, thinks she can get through to him in her required 20 minute office sessions for each student.

The majority of the play switches to the office that Gina shares with three other adjuncts for her allotted time with students. A clock reveals that it is 4:47 PM. As Gina packs up for the day, Dennis arrives just as scary as we have been led to believe, silent, hunched shoulders, dressed in black, hidden behind his hoodie and dark sunglasses. However, Gina is prepared for this seemingly troubled student as an untrained therapist. She attempts to get him to fill out a questionnaire, do a writing prompt, tells him stories from her own life and family, demands he remove his hat and sunglasses, does a role play as his mother, while he remains clutching his book bag. When the gun comes out, we are not surprised but when he uses it we are shocked. 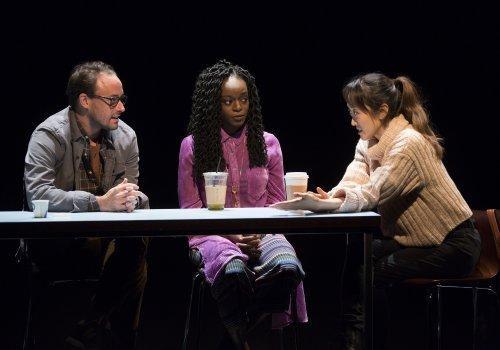 However, Cho replays the scene at least five times each time ramping up the tension now that we know Dennis has a gun. Gina provokes Dennis to defend his behavior based on his past experiences. He is the classic loner, bullied as a child, competing at home with a brilliant sister, and carrying around a very low self- image, and no expectations. Gina guesses that he would rather be hated and despised than ignored. Both an event with Gina and then with David who unexpectedly drops in proves that Dennis is right about what people think of him and how they react. The alternate endings allow the audience to make up its own mind as to what actually happens. Does Gina get through to Dennis that he is losing the opportunity to get something out of his college years and that he needs some kind of help? Each viewer will have to make up his or her own mind. However, the author seems to be saying we are all responsible for creating this kind of person.

Neel Keller’s production for The Public Theater is taut as a rope. Sue Jean Kim (who also appeared in Cho’s Aubergine last season) is excellent as Gina, a thirtysomething adjunct, who will try anything to get through to her needy student, including revealing her own deepest fears and problems. Her Gina is on the way to being a very fine teacher as she demonstrates infinite patience and the creativity to keep coming up with new tactics, as well as being a good listener when Dennis (in one scenario) spills his guts.

Although Ki Hong Lee is not the short, pock-marked 18-year-old that Cho describes in her script, he is scarily brooding and damaged as Dennis and his revelations of his life till now will give you goosebumps. Will his Dennis commit a serial killing some day? He is certainly convincing in this role. Greg Keller and Adeola Role are fine as the other two teachers, both of whom have their own gripes with Dennis and his behavior in their classes. Keller’s David may not be as understanding as he believes and Role’s Gina may be just a little too thin skinned which, of course, makes them an interesting contrast to Kim’s Gina. 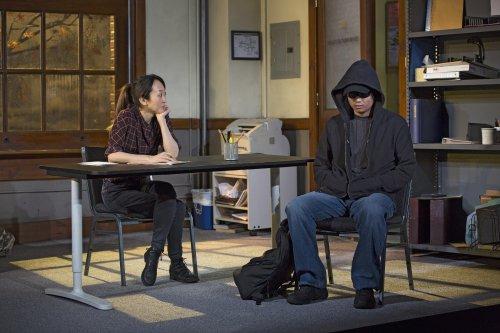 Much of the play’s effectiveness is due to the work of set designer Takeshi Kata and sound designer Bray Poor. Kata’s setting for the opening café scene with the teachers is surrounded by black suggesting a film noir. Gina’s office glides in as if with sinister intent giving us a corner of an extremely realistic college office. The sound design by Poor for both on-stage and off-stage gun shots adds vivid aural effects to what is already a disturbing drama. Kaye Voyce’s costumes are exactly right for these academics and the disaffected student. Christopher Akerlind’s lighting design also adds subtle moods to the tense action of the play.

Not only is Julia Cho’s Office Hour rivetingly acted by Sue Jean Kim and Ki Hong Lee, it is one of the few plays in recent memory to tackle a major social problem and offer an explanation or answer to society’s needs. Under Neel Keller’s astute direction and the production team’s superb physical production, Office Hour is both an important play and a compelling event in the theater. You may not agree with Cho’s conclusions but you will not be bored for a moment.