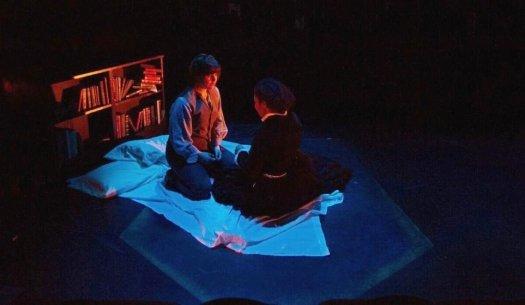 Lou Andreas Salome was a fascinating personage whose eventful life spanned the late 19th and the early 20th centuries.  An intellectual and respected author in her own right, she formed relationships with such major figures as Paul Rée (philosopher), Friedrich Nietzsche (philosopher), Friedrich Andreas (orientalist), Rainer Maria Rilke (poet/pantheist) and Helene von Druskowitz (the second woman to earn a doctorate in philosophy).  She even insinuated herself into Wagner’s inner circle.

Most particularly, she was a student and compatriot of Sigmund Freud and, subsequently, the first female psychoanalyst.  She was, in fact, the Alma Mahler of the philosophy/psychoanalytic set, another ambitious, brilliant woman who succeeded in fields that few women had before.

That she is not well known to even those who hold her male friends in high regard is a historic failing with which the play Lou grapples, with limited success.

Unfortunately, the playwright Haley Rice reduces Salome’s colorful life to an informative, dramatized documentary.  Where it should be dramatic and probing, it is didactic.

Kate Moore Heaney, the director—most likely in tandem with the wishes of the playwright—uses an all-female cast, consisting of actors of various levels of skill.  The play unfolds a bit too sluggishly, needing more attention to its pacing, a difficult task considering Rice’s continual explication of Salome’s biographical data. 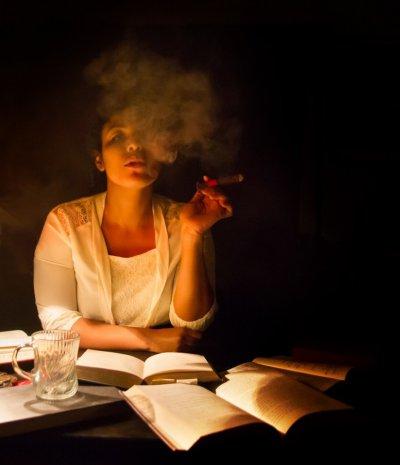 The opening scenes augur well, hinting at the deeper emotional motivation for Salome’s future behavior, her decision to avoid romantic involvement.   As the lights gradually rise to reveal Salome, seated at her desk, her back to the audience, she is described by disembodied voices as a contradictory figure who is loved and respected in equal measure.  Then Salome, the product of a respectable, well-to-do upbringing, tells a tale of being duped by the kitchen help when she was a child.  The look on Mieko Gavia’s face as Lou Salome after revealing this traumatic event makes it clear that she will never be duped again.  Ms. Gavia skillfully portrays Lou Salome as a stalwart anti-romantic who, nevertheless, knows that friendships with the influential males of her time were a necessary evil.

Salome is thereafter portrayed as a tunnel-visioned scholar who refuses any romantic, let alone sexual, overtures from the many intellectuals she drew to her inner circle during her long life.   But, when she finally gives in to the importuning of Rilke, after refusing and insulting him repeatedly, she is little changed, keeping her nose in her books and her thoughts on her writing.  She even warns Rilke not to damage her books, all the while breaking his heart.  (Rilke, as played by Erika Phoebus, is the only character to play on the audience’s heartstrings even though Ms. Phoebus came across as an adolescent rather than a mature man.)

Valeria A. Avina is a fine put-upon Victorian wife to Nietzsche, keeping her composure while dealing with his dalliances—platonic or otherwise—with Salome and others.   Natasha Hakata is more effective as Henrik Gillot, the minister who guided and fell for Salome than Sigmund Freud, whom she portrays as petulant and shallow, jealous of Adler and Jung.  It is difficult to find the great man, the intellectual avatar of Nazism, in Jenny Leona’s Nietzsche.

It’s difficult to tell if this particular all-female cast isn’t quite up to the task of portraying these difficult and complex men or if it is the idea of unisex casting that is the issue, but this cast of actresses, try as they might, don’t breath enough life into Haley Rice’s play. 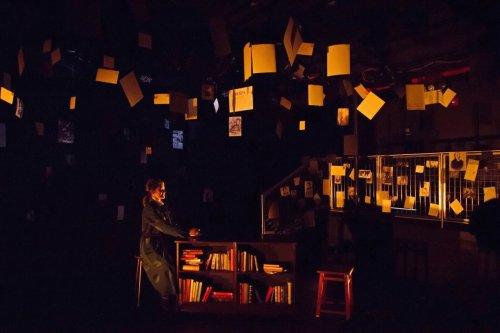 The set by Marisa Kaugars consists of a large desk and several smaller, portable pieces of furniture moved about to indicate setting changes, plus hundreds of reproductions of letters, postcards, photographs and cables hanging on wires from the ceiling.  During some of the drier, expository scenes, it is difficult not to scan these historic materials for hints of personal reflections and telling photos of the real historical characters so mechanically drawn in Ms. Rice’s scenario.

The lighting by Becky Heisler McCarthy makes the most of the tiny, intimate space in which no member of the audience is more than ten feet from the action.  Katja Andreiev’s costumes are evocative of the period, considering the modest means of an Off-Broadway company.

Produced by Theatre 4 the People, Lou is a sincere effort to bring the story of a great lady to life.