Maryann Plunkett as Juno and Ciarán O’Reilly as the Captain in a scene from Sean O’Casey’s “Juno and the Paycock” at the Irish Repertory Theatre (Photo credit: Carol Rosegg)

It’s 1922, and, as Ireland tears itself apart, the Boyle family struggles not to do the same within the walls of a run-down tenement. The second play in Sean O’Casey’s Dublin trilogy, and arguably his masterpiece, Juno and the Paycock is set during the Irish Civil War, when, after winning their independence from the British, the Irish turned their guns on each other in a bloody dispute over what freedom actually meant. Some of this conflict has seeped into the Boyles’ home, but their miseries run deeper than Ireland’s mounting troubles.

At the heart of the family’s problems is “Captain” Jack (Ciarán O’Reilly), its boozy patriarch. A consummate ne’er do well, he spends his days and nights haunting the local pubs with Joxer Daly (John Keating), a duplicitous drinking buddy whose porous loyalty instinctively shifts to whomever is picking up the next round. As Joxer pretends to hang on each of Jack’s fanciful words, especially about his supposed adventures at sea, Juno (Maryann Plunkett), Jack’s put-upon wife, single-handedly keeps the family from becoming destitute through a stolid combination of thrift and her own poorly paid labors.

As the shamelessly indolent Jack gripes nonstop about phantom leg pains, Juno must also support the couple’s two adult children, both of whom are out of work for reasons of principle, though, as the play opens, their youngest Mary (Sarah Street) isn’t quite yet being crushed by hers. Currently on the picket line, she occupies her time fending off the unwanted advances of Jerry Devine (Harry Smith), a blandly earnest fellow striker, while encouraging the wanted ones of the dandyish Charles Bentham (James Russell). Meanwhile, her brother Johnny (a gut-wrenching Ed Malone), who lost an arm during the Irish War of Independence, is weighted down not only by that injury’s lingering torments but also the guilt and fear of a dark secret.

Ciarán O’Reilly as the Captain and John Keating as Joxer in a scene from Sean O’Casey’s “Juno and the Paycock” at the Irish Repertory Theatre (Photo credit: Carol Rosegg)

Of course, the play is a tragedy, but along the way, O’Casey laces the story with enough humor and hope to generate a few moments of doubt about the eventual arrival of its sorrows, which, when they do come, are only made more poignant by these optimistic lapses. All of the play’s suspiciously serendipitous turns cohere in the figure of Bentham, who, in addition to being Mary’s preferred suitor, also informs the Boyles that a dead relative has, for some reason, bequeathed Jack a substantial inheritance. Rather than wait for the money, however, the preternaturally reckless Jack begins spending the family into debt with predictable consequences.

While the audience starts to dread the inevitable, the tenement comes to life with music and dancing, as the Boyles allow themselves the indulgence of believing that fortune is finally on their side. The family’s live-wire neighbor Maisie Madigan (Terry Donnelly) joins the celebration, which director Neil Pepe stages with an infectious energy that, at least temporarily, fills the space with a joy that’s as much of a mental break for us as it is for the characters.

Of O’Casey’s works, Juno and the Paycock is easily the most popular (Alfred Hitchcock even created a lamentable stage-bound film version), as evidenced by its multiple appearances at the Irish Repertory Theatre. That explains why this production might elicit a sense of déjà vu from Irish Rep fans, since many of the actors from the 2013-2014 Charlotte Moore-helmed production are portraying the same roles in the current one. 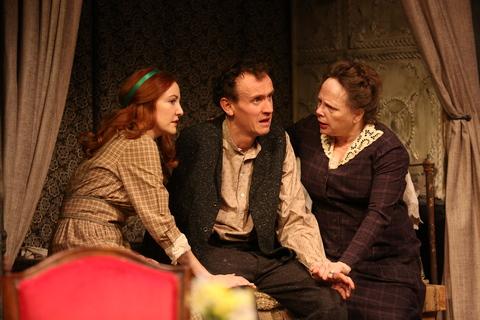 Sarah Street as Mary, Ed Malone as Johnny, and Maryann Plunkett as Juno in a scene from Sean O’Casey’s “Juno and the Paycock” at the Irish Repertory Theatre (Photo credit: Carol Rosegg)

From this group of familiar faces, O’Reilly and Keating are particularly strong in their second go-around, finding notes in Jack and Joxer’s codependent relationship that are both hilarious and hideous. With his almost sneering delivery of Joxer’s obsequious and vowel-rich responses (“it’s a darlin’ funeral, a daarlin’ funeral”), Keating’s performance is especially brilliant, pitched just before the point when servility turns into hate. As for Jack, O’Reilly brushes aside his litany of faults to make him a first-rate charmer, capable of snatching a smile from Juno even after he’s brought the overburdened woman to her wit’s end.

Charlie Corcoran’s immersive set will also stir memories for anyone who’s seen The Shadow of a Gunman, the first offering of the Irish Rep’s ongoing O’Casey season. Just as with that play, which takes place a couple of years earlier during the Irish War of Independence, clotheslines overhang the audience and the ramshackle tenement still feels like it’s on the verge of collapse. This visual continuity, completed by the return of Michael Gottlieb’s evocative lighting and David Toser’s threadbare costumes, helps underscore that the two works are, in fact, one unbroken history of suffering.

And, in both plays, women endure far more than their share of it, falling victim to the failed promises, abject weaknesses, and violence of the men around them. That’s why when Plunkett’s Juno, an emotional powder keg, finally explodes, it absolutely breaks your heart, because, at that moment, you’re sure of two things: there isn’t any reason for her to go on, and she will.