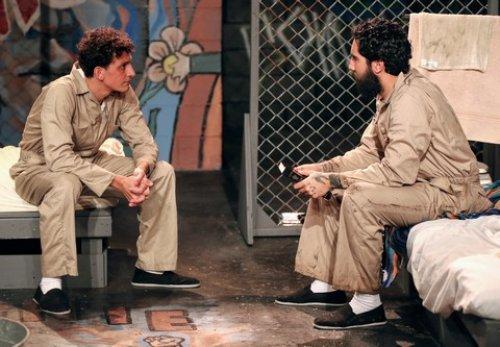 Mateo D’Amato and Anwar Wolf in a scene from Will T.F. Carter’s “Barabbas” at Theater for the New City (Photo credit: Carol Rosegg)

The world premiere of Will T.F. Carter’s new play, Barabbas, is typical of the genre of prison dramas that take place in jail cells like Manuel Puig’s The Kiss of the Spider Woman, The Island by Athol Fugard, John Kani and Winston Ntshona, Sebastian Barry’s On Blueberry Hill and Jean Genet’s Deathwatch. However, this new play is more political than most dealing with recent corruption in Peru. Unfortunately, Eduardo Machado’s production at Theater for the New City lacks tension while the play fails to reach any catharsis, but simply suggests that the corruption will continue.

Set in 2021, the play begins with the inauguration of a new president of Peru, who has dedicated himself to rooting out the corruption of the previous Peruvian leaders. Caught in this new crackdown, Sebastián Sahak Barabbas (aka Bara), a lawyer for a Peruvian congressman, is incarcerated in Miguel Castro Castro Prison in the San Juan de Lurigancho district of Lima for taking bribes. Ironically, or by design, he is placed in the same cell with the whistleblower Jesús Moreno Glas whose information caused him to be convicted. One of the two guards is also on the take and Bara loses both his Rolex watch and his designer shoes. 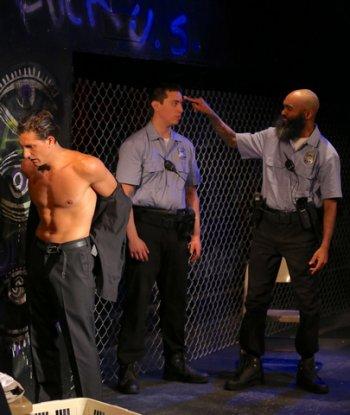 Mateo D’Amato, Sergio Caetano and Gypsi Aponte in a scene from Will T.F. Carter’s “Barabbas” at Theater for the New City (Photo credit: Carol Rosegg)

Jesús has found religion while in prison and offers Bara both consolation and his Bible, but Bara is interested in neither. We also see meetings between Bara and his lawyer, a woman colleague from his office with whom he seems to have been intimate. She brings him money to pave his way but warns him there are too many people under suspicion for their congressman to get to his case any time soon. She also suggests that it would go well for him if he got rid of Jesús whose information has caused so much trouble for so many. When news that the president has been shot is announced, events take a complete 180 turn. The men are now political prisoners rather than convicted criminals.

One of the problems with the play is that the title referring to the Biblical story of Jesus and Barabbas gives away the ending so that there is nothing to wait for. As Bara, Mateo D’Amato shows little or no change in his interactions with Jesús. Due either to poor acoustics or a thick accent, Anwar Wolf as Jesús is difficult to understand particularly when he speaks upstage facing the back of the prison cell which is a good deal of time in Machado’s staging. As Bara’s lawyer, Nikki Valdez is perky and efficient though she seems to be in a totally different play from the others. Gypsi Aponte and Sergio Caetano make an interesting contrast as the corrupt guard and the compassionate one, respectively. 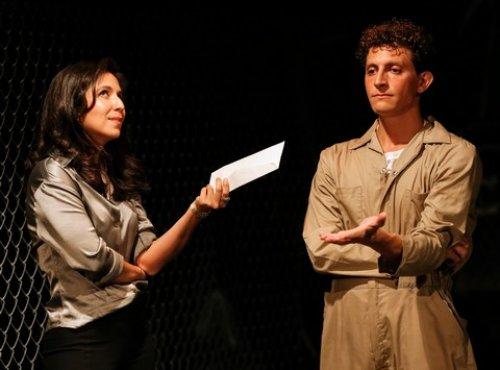 Nikki Valdez and Mateo D’Amato in a scene from Will T.F. Carter’s “Barabbas” at Theater for the New City (Photo credit: Carol Rosegg)

Mark Marcante’s set is a bit of an enigma: although the script describes the prison cell as being “pallid and dismal,” the walls here are decorated with colorful murals which undercut the horror of the prison we are told is a “special kind of hell.” The realistic costumes for both guards and prisoners are by Katherine Anick-Jenkins. Alex Bartenieff’s lighting never suggests the gloom or the unnatural brightness of such places, while Daniel Benhamu’s fight direction is extremely brutal and believable.

While Will T.F. Carter’s Barabbas is very outspoken on the topic of political corruption in Peru, the play is dramatically weak as so much of it is exposition. In each scene we learn a little bit more about the men’s lives, but little that is new happens in the play’s 90 minutes. The tepid direction by Eduardo Machado gives us too much time to consider the play’s deficiencies and makes the play seem longer than it is. Carter’s anger at what is going on in Peru is commendable, but Barabbas does not utilize that indignation except on an intellectual basis.

Theater for the New City, 155 First Avenue, between 9th and 10th Streets, in Manhattan