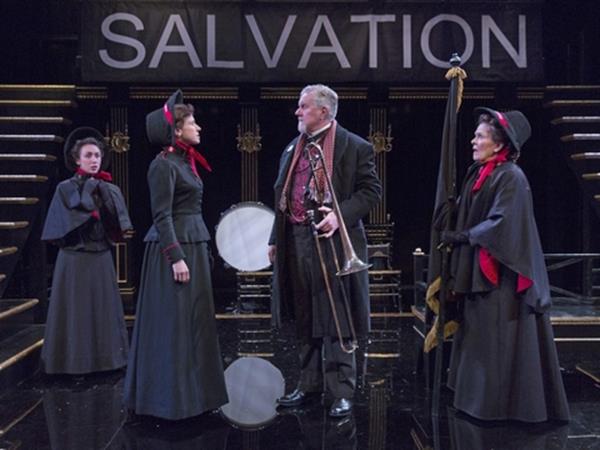 George Bernard Shaw’s Edwardian plays of ideas – filled with wonderful discussion and the author’s famous paradoxes – can be very talky if not produced with great care. In the hands of David Staller, founding artistic director of the Gingold Theatrical Group, and The Pearl Theatre ensemble, Shaw’s play of ideas becomes a delightfully provocative comedy. This witty 1905 play, in a deliciously acted and designed production which concerns the age-old conflict between “God and salvation” versus “money and gunpowder,” has become relevant all over again with its exploration of economic inequality. When the play was written this was heresy – today most people agree with Shaw that poverty is the biggest crime. Dan Daily, Carol Schultz and Richard Gallagher give memorably rich and impressive performances in a production that you will be sorry when it ends.

Performed with a cast of nine with some actors playing as many as three roles, this satisfying production offers some new directorial touches, not all of which work as well as intended. Both acts begin with the members of the acting ensemble greeting the audience in their black undergarments and then proceeding to put on their costumes on the two sides of the stage. The purpose of this is rather obscure (that we are all brothers under the skin?) More effective is the new prologue Staller has created out of lines from Shaw’s 1941 screenplay and his preface to the published edition of the play. This introduces the efforts of Major Barbara as she preaches on a street corner to a crowd which not only shows us her good work but also adds some much need diversion from the long drawing room scene that usually opens the play. Staller has also successfully trimmed some of the long speeches so that the lines are more like traditional dialogue.

Shaw’s first act takes us to James Noone’s elegant black and gold library of Lady Britomart Undershaft’s house in London’s Wilton Crescent. When her three children were still very young she separated from her husband, ammunitions manufacturer Andrew Undershaft, because of the Undershaft tradition that the firm be inherited by a foundling, inevitably disinheriting the family heir. Now years later, Lady Britomart is concerned that with the coming marriages of her younger daughter Sarah to penniless man-about-town Charles Lomax (who has not yet received his inheritance) and her elder daughter Barbara, a major in the Salvation Army, who is engaged to marry Adolphus Cusins, a poor professor of Greek, there will not be enough money to support them. This does not even take into consideration that her 25-year-old son Stephen will someday marry and need an establishment of his own.

To this end, she has invited her fabulously wealthy estranged husband to visit the family and get to know his children. Andrew is not impressed with his too ladylike and proper daughter Sarah or his stuffed-shirt son Stephen. However, he sees himself when young in Barbara and her young man. Barbara, appalled by her father’s line of work, offers to save his soul. He counters by making a bargain with her: he will visit her in her Salvation Shelter on the following day, if she will visit his cannon works (and his model village) on the day after. She takes the bargain little knowing how this will change her life and that of her family. She will be beset by moral problems when he offers a huge donation to the Army made from the profits of armaments and his model village for his workers turns out to be the latest in organization, hygiene and efficiency. 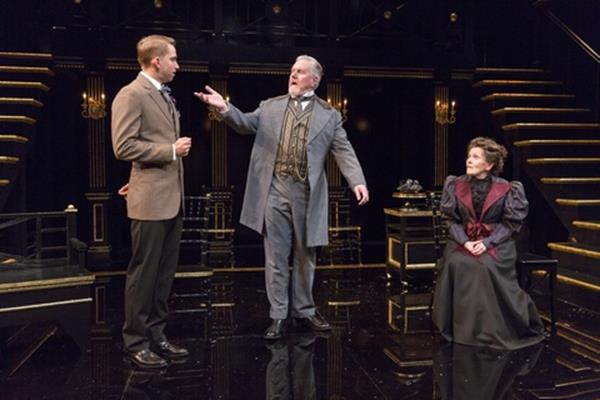 Although Barbara is the titular heroine of the play, Hannah Cabell’s performance, wooden, prim and starchy, is less than stellar. However, the rest of the cast more than makes up for it. Dan Daily is a wonderfully expansive Andrew Undershaft, a munitions dealer, masterful, wise and easy going. He may be the “Prince of Death” or “Machiavelli” as he is called in the play but he seems to espouse all the right sentiments. When he declares that the seven deadly sins are “food, clothing, heat, rent, taxes, respectability and children,” he defines what the war on poverty in our own time has not been able to cure. Carol Schultz sparkles as two very different powerful women who are sisters under the skin: as Lady Britomart she hides under a veneer of respectability but always gets what she wants, while as General Baines of the Salvation Army she puts her trust in God and is never disappointed.

The role of Barbara’s Greek professor is usually played as a pedantic prig. However, here Richard Gallagher plays him as a carefree man with a sense of humor despite his enormous erudition and this turns him into the hero of the play. The remainder of the cast demonstrates versatility playing multiple roles: Cary Donaldson is an appropriately inane Lomax as well as a pugnacious Bill Walker; Becky Baumwoll is a moralistic Sarah Undershaft and an emotional Jenny Hill of the Army. Pearl resident actors Bradford Cover and Robin Leslie Browne each play three roles very differently: Cover is the very proper Undershaft butler Morrison, the elderly beggar Peter Shirley, and Bilton, the no-nonsense foreman of the Undershaft ammunition works. Brown is the decorous maid to Lady Britomart, the boisterous Rummy Mitchens who helps out at the Army, and Undershaft’s efficient assistant.

The design team has added greatly to the Edwardian atmosphere: you would not expect Noone’s black and gold set to work for all three of the play’s locations (the Library at Wilton Crescent, the West Ham Shelter, and the High-explosive Sheds at the Arsenal of Undershaft and Lazarus) but lit by Michael Gottlieb to suggest different times of day, it works wonderfully well. Tracy Christensen’s costumes are redolent of the 1905 era and she has done particularly fine work with Lady Britomart’s elaborate gowns, as well as the men’s numerous three-piece suits.

David Staller’s production of Major Barbara is an enchanting evening in the theater, the sort of play where you hang on every witty word and enjoy the twists and turns of the plot. This is an excellent introduction to Shaw and this comedy, as well as a delightful reunion for those who know the play well. You will be sorry to see the end of the Undershafts at the final curtain.

The Pearl Theatre, 555 West 42nd Street, between Tenth and Eleventh Avenues, in Manhattan