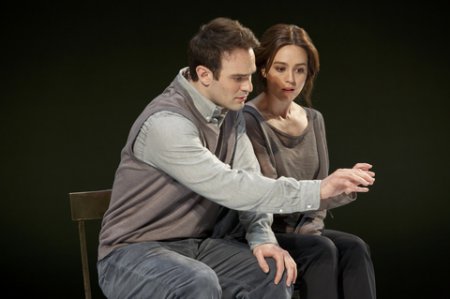 You may think that you have to be a neuroscientist to study the brain, but British playwright Nick Payne doesn’t think so. Following his critically acclaimed Constellations (using quantum mechanics) and If There Is I Haven’t Found It Yet (global warming), the latest science play by Payne to reach New York is the riveting cerebral drama, Incognito. Given a splendid production by Doug Hughes for Manhattan Theatre Club, this play takes on the topic of the brain, the memory and the self. Combining three stories, two inspired by true events and the third fictional, Payne asks the question of whether we are a product of our physical brains or of our educated minds, and whether memory is subservient to either or both. While ultimately, the play’s three parts do not make a unified whole, Incognito remains a fascinating, provocative evening.

This is heady theater and demands concentration. However, the excellent cast of four made of Geneva Carr (Theatre World Award winner for Hand to God), Charlie Cox (Netflick’s Daredevil), Heather Lind (AMC’s Turn: Washington’s Spies), and Morgan Spector (Drama Desk Award nominee for Russian Transport) make this an unforgettable evening in the theater. The versatile cast play 20 characters, some as many as six, without changing costume but with different accents and demeanors, while the succeeding scenes take place almost as fast as the synaptic functions in the brain. The play which alternates in its telling of the three stories is also divided into three parts: “Encoding,” “Storing’ and “Retrieving.” Before each section the cast perform hand gestures created by Peter Pucci that mimic the synaptic actions in the brain. 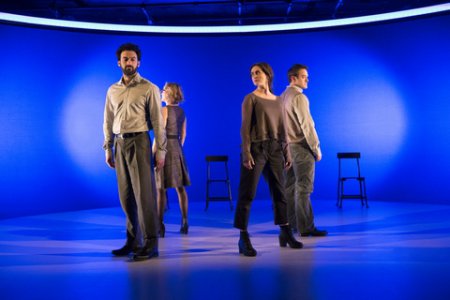 The long reading list printed in the program suggests the inspiration for the two true stories: in 1955, Dr. Thomas Harvey, a pathologist at Princeton, was given the task of doing an autopsy on the body of Dr. Albert Einstein. What made Harvey famous was that he stole the brain for later study on what made Einstein different from other men. However, he did not have permission to do research on it and had to solicit Einstein’s son Hans Albert to allow him to do so. In 1997, Harvey was approached by Michael, a journalist, and together they took a cross-country journey to California to meet up with Einstein’s granddaughter Evelyn with pieces of the brain in jars in the trunk.

In 1953, Henry Molaison (called Maison by Payne) had an operation to relieve his epilepsy. Although the operation was successful, it left Henry with a case of amnesia in what is now called “permanent present tense.” For Henry, everything now happens for the first time. Nicknamed Patient HM, Henry was studied by various neuroscientists who wanted to understand the connection between memory and brain damage.

The third story, set in the present, concerns Martha, a British clinical neuropsychologist, divorced after 21 years who begins her first affair with a female lawyer. However, she forgets (consciously or unconsciously) to tell Patricia, a younger woman, that she has been married and has a grown-up son. The point here is that even brain specialists can be carried away by their emotions. All three stories take place simultaneously though the characters do not age in the course of the play. The cast works on an empty round disk designed by Scott Pask with only four chairs for furniture. All are dressed in unobtrusive contemporary clothing in shades of gray designed by Catherine Zuber. Aside from the accents which switch from American to British and back again (thanks to dialect coach Stephen Gabis), it is left to Ben Stanton’s subtle lighting to suggest changes in time and place. 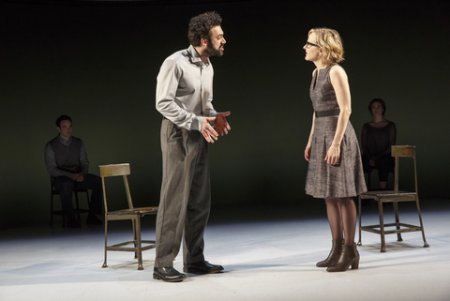 While all of the actors play between four and six roles each, doctors, patients, and members of the general public, they are mostly prominently seen in one or two of their roles. Spector is a dedicated Thom Harvey, even when others begin to think him crazy. Cox gives a sensitive, moving portrait of Henry who can only remember how much he loves his girlfriend Margaret. As Martha attempts to turn her life around after a bitter divorce, Carr undertakes a journey of discovery. Lind is mainly seen in two contrasting roles: Margaret, endlessly patient with Henry, and Patricia, Martha’s volatile but brilliant girlfriend. It is to their credit as well as director Hughes that there is no trouble knowing who they are at any given time or keeping the stories straight even when several other tangential tales are dramatized.

Nick Payne’s Incognito investigates whether we are who we are due to our memories, our minds or our brains. And do our brains play games with us, tricking us to believe different things at various times? Director Doug Hughes who has excelled at staging new, contemporary plays (The Father, Doubt, The Whipping Man) keeps the abstruse nature of the material from getting complicated or confusing. Geneva Carr, Charlie Cox, Heather Lind and Morgan Spector demonstrate their remarkable versatility peopling the stage with different characters and time frames that make up this captivating and engrossing story. While the play has no easy answers nor does it solve the problems that it poses, it is stimulating and challenging theater.