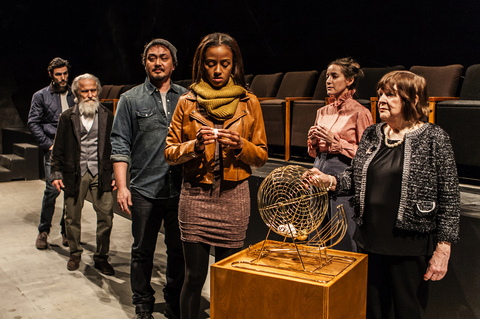 What can a fifteenth century morality play say to twenty-first century audiences?  Everybody, Brandon Jacobs-Jenkins’ take on the medieval Everyman makes an earnest, but not quite successful, effort to communicate the play’s message, one that boils down to one sentence:  Everyone dies and has to make an accounting with God.

The original was aimed at an audience that most certainly was illiterate, so that the clever creators used cartoonish, unsubtle characters who spoke in popular jargon, even spouting profanity, which must have tickled the medieval audiences’ sensibilities and kept them following the actors in their juicy parts.

Jacobs-Jenkins follows suit, but with his tongue firmly in his cheek, writing his characters, particularly Stuff (played with a no-nonsense, “from the block” insouciance by Lakisha Michelle May), as immediately recognizable twenty-first century caricatures.  When cutie pie child Lilyana Tiare Cornell, playing the character Time, spouts the word “shitty,” the audience at the Diamond Stage giggles nervously.

The original was performed in a public space.  To approximate this feeling of wandering around in the town square, Jacobs-Jenkins and his clever director, Lila Neugebauer had the characters emerge from the audience, feigning surprise at being chosen until they were swallowed up by the fast moving plotline. 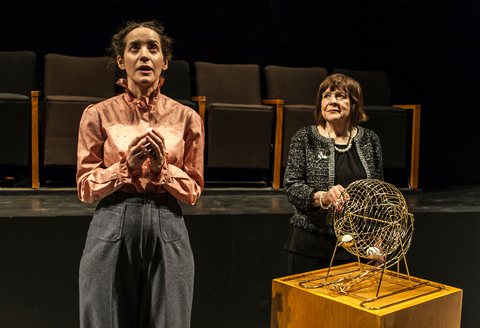 Brooke Bloom and Marylouise Burke in a scene from “Everybody” (Photo credit: Monique Carboni)

The origins of Everyman are a bit fuzzy, but the lovely, charismatic Jocelyn Bioh, first appearing in the guise of a Signature usher, gives an astute thumbnail sketch of the play’s history until she morphs into God—yes, God!  This is a very discontented God who calls upon Death, the wonderfully ditsy Marylouise Burke to find out how God’s creation had gone so badly off course.

The action of Jacobs-Jenkins’ play invades the seating area with the characters shouting at each other across the wide Irene Diamond space.   A strip of the stage is occupied with theater seats in front of an oddly paneled curtain which eventually opens up for the play’s finale.  (The scenery is by Laura Jellinek who simultaneously over- and under-designed.)

To accentuate the “everyman” theme, the actors are given their assignments via a lottery, meaning that these performers had the task of memorizing virtually the entire script!

I happened to see two different actors playing the title character, each coloring the play in different hues:  Louis Cancelmi, handsome, well-built, but oddly self-effacing, and David Patrick Kelly, an older gentleman, whose energy was unflagging as he zipped about the theater chased by Love (Chris Perfetti, playing a mean-spirited, unlovely character with zest). 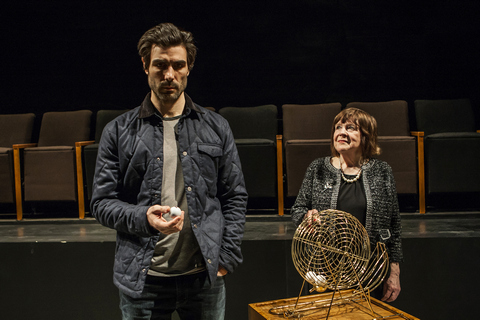 Louis Cancelmi and Marylouise Burke in a scene from “Everybody” (Photo credit: Monique Carboni)

In Jacobs-Jenkins’ version, as in the original, poor Everybody tries to get his “friends,” all symbolically named—Understanding, Friendship, Kinship, Stuff, etc.—to join him in the afterworld, but each has has own excuses to avoid this journey.   Who finally joins Everybody in the grave I won’t reveal here.   The play’s themes of self-examination and self-revelation somehow seem simpleminded and obvious, but the actors pour their guts into their parts.

The rest of the cast, not mentioned above, Brooke Bloom and Michael Braun, both amazing in the two performances I attended.

Gabriel Berry’s costumes, which turned the “audience members” into their characters, were witty and colorful.  Two giant skeletons, each manipulated by a single actor, were frightening in a way that both medieval and modern audiences could relate to.

Matt Frey’s lighting, which often left the theater in eerie darkness, created moods—from mundane to highly dramatic, with their ever-shifting designs and clever use of color.

Although a tad too long and obvious, Everybody is a rich theatrical experience.

Running time:  100 minutes with no intermission