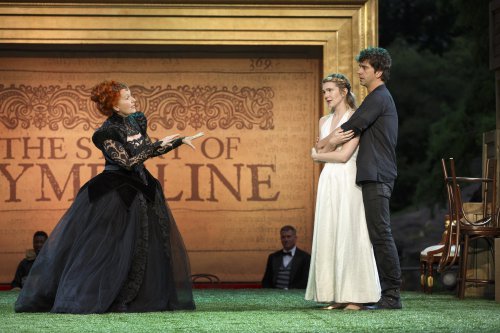 Kate Burton, Lily Rabe and Hamish Linklater in a scene from Shakespeare in the Park’s “Cymbeline” (Photo credit: Carol Rosegg)

At The Public Theater’s Shakespeare in the Park venue, director Daniel Sullivan has proved himself a brilliant interpreter of the Bard’s comedies, both dark and light, from the evidence of his Merchant of Venice, The Comedy of Errors and Twelfth Night, to name only a few. Therefore it is a great disappointment to report that his Cymbeline, the second and last 2015 Shakespeare in the Park offering, based on his 1999 Old Globe Theatre, San Diego, staging, is both confused and uneven, both visually and theatrically. Even more discouraging, the production wastes the talents of noted stage stars Kate Burton, Raúl Esparza, Patrick Page, and Lily Rabe and Hamish Linklater, the acting couple being reteamed on the New York stage for the fifth time.

Cymbeline, one of Shakespeare’s late romances, is a difficult play to stage as it is a fairy tale as well as having many subplots pulling in multiple directions. Based on both Holinshed’s Chronicles of the Kings of England, Ireland and Scotland (Cymbeline having been a real-life British monarch) as well as a tale from Boccaccio’s Decameron, the play is a fairy tale for adults with one of those revelation scenes at the end which takes 30 minutes to unravel.

The fairy tale story which has little psychological validity presents us with King Cymbeline of Britain who is goaded on by his jealous but beautiful second wife to banish Posthumous Leonatus, the husband of his daughter Imogen, on the grounds that he is a commoner. In Rome, Posthumous meets the immoral Iachimo who bets him he can seduce his wife and bring him proof of her infidelity. In the meantime, the Queen is hoping to marry her doltish son Cloten to Imogen to ensure that he is heir to the throne.

When Iachimo appears to have accomplished this feat, Posthumous writes to his servant Pisanio back in Britain to kill Imogen. Instead, she flees the court and meets up with her long believed lost brothers Guiderius and Arviragus who have been brought up in ignorance of their noble birth by Belarius, a lord unfairly banished 20 years before from Cymbeline’s court. When a Roman army attacks Britain as Cymbeline’s queen has convinced him to not pay the necessary tribute to Augustus Caesar, all the characters and plot come together and the truth is finally revealed.

Making matters more complicated, Sullivan has chosen to use only nine actors to play all of the characters, necessitating seven of them to double up in contrasting roles. While this is at times amusing to have Linklater play both the hero Posthumous Leonatus and his rival Prince Cloten (with a light brown Prince Valiant wig), it is also disconcerting, while the final scene in which Teagle F. Bougere has to play the Roman ambassador Lucius as well as Dr. Cornelius simultaneously seems like poor planning. 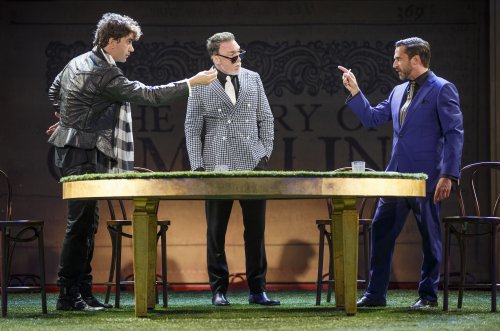 Hamish Linklater, Patrick Page and Raúl Esparza in a scene from Shakespeare in the Park’s “Cymbeline” (Photo credit: Carol Rosegg)

The setting by Riccardo Hernandez for the open air Delacorte Theater is made up of two gold proscenium arches, with the smaller one having a row of chairs in front of it for the actors to sit in while they are not on the round disk of a stage covered with what looks like green AstroTurf. On both sides of the larger proscenium are piles of packing crates, chandeliers, statues, paintings, etc., suggesting that the performance we are witnessing is a dress rehearsal. Unfortunately, nothing is made of these extraneous props. On the side of the stage are two enormous pictures, one of a World War I tank, the other a copy of Jacques-Louis David’s famous painting of Napoleon on a rearing horse, both lit in red. None of this has anything remotely to do with the play we are about to see.

The costuming by David Zinn is even more eccentric: the British Queen is dressed in Elizabethan garb with a red wig (shades of Elizabeth I) while the Italian villain Iachimo wears a blue silk lounge suit ready for Las Vegas, circa 1960. Cymbeline’s lost sons Guiderius and Arviragus (brought up in the country) are costumed as backwoods frontier folk from the 19th century. Posthumous’ servant Pisanio appears to be dressed as a butler from an Oscar Wilde comedy; the two policemen dressed as Keystone Kops. The rest of the cast is appareled in clothing from various centuries, blurring the time of the story, without making it any clearer.

The cast remains uneven and appears uncomfortable with their dual roles, having to make strange choices. Rabe is charming as the Princess Imogen who must deal with her father’s wrath, but her performance would be more suitable for Rosalind in As You Like It or Viola in Twelfth Night. Rather than seeming the plucky heroine, she seems to be playing in a light drawing room comedy, which this is not. Linklater has the problem of creating two distinct men, the noble hero Posthumous, banished from Cymbeline’s court, and the Queen’s cloddish son Cloten, both in love with Imogen. Making them opposite so that the former rather declaims than speaks, and the latter appears dense and dull, Linklater seems ill at ease with both. One of the assumed reasons for the casting of Rabe and Linklater is that they are a couple off stage, but ironically they have hardly any scenes together in course of the play.

Burton is amusing as the evil Queen, her husband’s second wife, but she is not so convincing as the elderly gentleman Belarius, a banished lord from Cymbeline’s court who has brought up his kidnapped sons. Esparza is delightful as the immoral and oily lounge lizard but his Iachimo seems to be from another, more modern play entirely. Page’s Cymbeline is quite bland, while his Italian Philario, Posthumous’ host in Rome, is fine except for the unaccountable Southern accent. Bougere, David Furr and Jacob Ming-Trent work valiantly at two roles each but to little avail in this hodgepodge of a production.

Pulitzer Prize-winning composer Tom Kitt is responsible for the melodic and pleasing settings of several Shakespearean lyrics including, “Hark the lark at heaven’s gate,” “Fear no more the heat of the sun,” and “Come, thou monarch of the wine” which has been unaccountably been interpolated from Antony and Cleopatra. Granted that the diction is excellent so that the unfamiliar play is easy to follow, Daniel Sullivan’s take on Shakespeare’s minor Cymbeline is a confused mishmash of various styles and tones. In so doing, he has given the talented actors more challenges than they can successfully handle.

Shakespeare in the Park

Free tickets distributed at Noon at The Delacorte Box Office to those on prior line or by lottery at http://www.publictheater.org