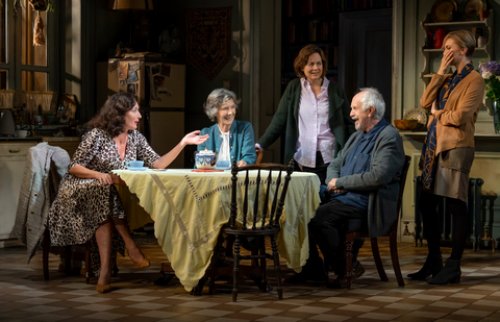 From the evidence of the three plays by French playwright Florian Zeller to reach New York so far, he writes domestic plays that are intellectual riddles much in the manner of Beckett, Ionesco and Pinter. He deals with what is real and what is imagined; what is remembered and what really occurred. A fairly young man now aged 40, he has been obsessed with characters who are suffering from dementia. In The Father written in 2012, given a Broadway production in New York in 2016, each scene is played twice: André’s reality and what his dementia makes him believe. The audience’s problem is which is which. In The Mother (2010), seen in New York earlier this year in a production by the Atlantic Theatre Company, we see every scene (except the last one) three ways: alternate realities or someone’s sick fantasies?

The Height of the Storm (2016), translated by British playwright Christopher Hampton who has translated all of Zeller’s plays into English, is now having its United States premiere at Manhattan Theatre Club’s Broadway venue, the Samuel J. Friedman Theatre. Reusing the names of the characters in those earlier plays, The Height of the Storm proves to be a variation on the same theme: there has been a family funeral on Saturday for one of Anne and Élise’s parents: either father André, a famous French writer, or mother Madeleine. However, the play does not immediately let us know which one.  In any case, daughter Anne is going through her father’s desk to find his unpublished diaries as though he is gone, and daughter Élise talks of putting him in The Blue House, a nursing home, as though their mother is no longer there to tend to his needs.

Just like in The Father and The Mother, other characters have fluid identity – or are they just playing two characters simultaneously? The Man is both Paul, Élise’s latest boyfriend, and the real estate agent who was invited to make an offer for the house – or is he one and the same as Paul seems to be in real estate development. The Woman claims to be a childhood friend of André with whom he may or may not have had an affair, but whom he claims to not recognize. But she also seems to be a representative for The Blue House nursing home. Some of the scenes may work as flashbacks, others may be André’s creeping dementia which Madeline has obviously dealt with for several years. You will be either intrigued or frustrated by the lack of specificity. It does make for a fascinating puzzle. 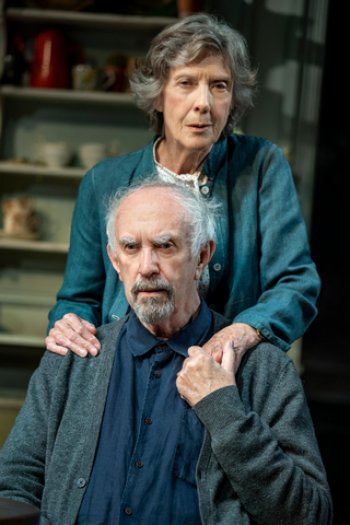 Eileen Atkins and Jonathan Pryce in a scene from Florian Zeller’s “The Height of the Storm” at MTC’s Samuel J. Friedman Theatre (Photo credit: Joan Marcus)

What is evident is that Zeller writes tremendous roles for actors. Frank Langella won the Tony Award back in 2016 for the title role of The Father, and The Height of the Storm may well win others. The current production includes all but one of the British cast from Jonathan Kent’s London presentation and two-time Tony Award winner Jonathan Pryce and three-time Olivier Award winner Eileen Atkins give the kind of performances that legends are made of.  As André, Pryce is like a lion in winter: confused, detached, incoherent at times, yet raging due to his loss of power, and completely bereft when his wife is not in the room. His anger is always palpable and makes him seem bigger than his actual stature.

Atkins, on the other hand, is the phlegmatic spouse and wry mother, compassionate and understanding of her husband of many years, peremptory with her daughters who she finds selfish and nosy. She audibly resents that they rarely visit and have been unaware of their father’s deteriorating condition. As the older take-charge daughter, Amanda Drew is soothing, a no-nonsense person who believes in tackling problems head on and getting things accomplished. Lisa O’Hare (new to the cast) as  a fine Élise is scattered, always dealing with her emotions and love life, trying to gloss over the obvious without completing any tasks. The sisters could not be more different in the hands of Drew and O’Hare.

As the Woman who may or may not be an old friend or even André’s former mistress, Lucy Cohu is expansive and mysterious, never allowing us to know for certain who she is or what she knows. As The Man introduced as Élise’s boyfriend Paul, James Hillier appears to have secrets to keep, while attempting to be ingratiating. Director Jonathan Kent, best known for his productions of major classical revivals, keeps the pace spirited even when little seems to be going on, although at all times his actors are commanding and in control – even when we are not sure as to their reality. 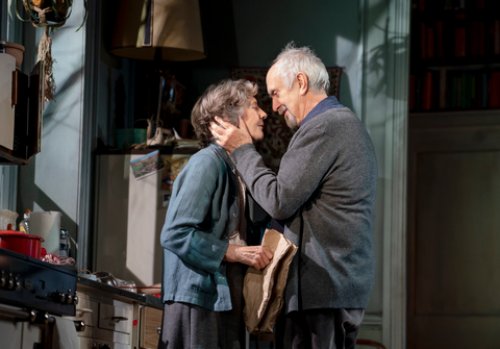 Eileen Atkins and Jonathan Pryce in a scene from Florian Zeller’s “The Height of the Storm” at MTC’s Samuel J. Friedman Theatre (Photo credit: Joan Marcus)

Anthony Ward’s kitchen-sitting room setting is very French and suggests a large old country house with a great deal of history. His pitch-perfect costumes run the gamut from Élise’s chic outfit to her parents’ rather worn, lived-in clothes. Hugh Vanstone seems to paint pictures with light as the play covers a series of mornings and afternoons after a storm. The haunting and melancholy violin music heard before each scene is the original work of composer Gary Yershon, with sound design by Paul Groothuis.

Florian Zeller’s The Height of the Storm is an advance over his earlier plays in that it is both more complicated and has more elements going on at the same time. Jonathan Pryce and Eileen Atkins give the kind of indelible performances that stay with you long after the final curtain comes down. Having seen them in the roles of André and Madeleine, you cannot imagine anyone else in these roles. The play is also another in Zeller’s astute investigations into tricks of the mind in older people.

The Height of the Storm (extended through November 24, 2019)

Running time: one hour and 20 minutes without an intermission