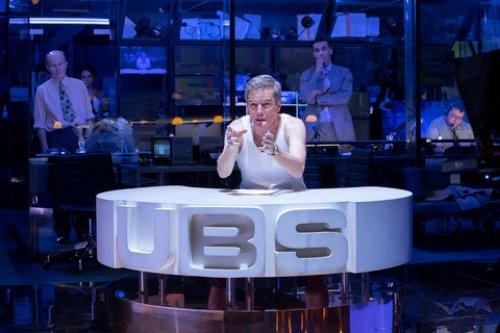 Director Ivo van Hove’s stage version of the Paddy Chayefsky cult film Network gives Bryan Cranston the role of a lifetime as Howard Beale, the UBS news commentator who has a nervous breakdown on air and then becomes a media messiah. The high tech production designed by long-time van Hove associate Jan Versweyveld with video design by Tal Yarden is riveting throughout its two hour intermission-less running time by putting the audience in the news studio and making us complicit in the action.

Scripted by Lee Hall, who has become an expert at adapting screenplays for the stage with Billy Elliot, Shakespeare in Love and now Network, as well as plays and novels into screenplays (Pride and Prejudice, War Horse, The Wind in the Willows), has created a very faithful and fluid theatrical adaptation that takes to the stage like it was always meant to be. The most remarkable element is how relevant this 1976 film feels in 2018 even though the adaptation version keeps it in its own time period. What for Chayefsky was an outrageous cautionary satire has become a growing and frightening reality: the news room itself as news both real and manipulated just for the ratings which, of course, means big money. In the Age of Trump, the news and its television commentators are big business.

The stage script is quite faithful to the original screenplay but with a trimming of the scenes concerning negotiations for a show with the terrorist organization, the Ecumenical Liberation Army, which have gotten a bit dated since Chayefsky wrote it and the affair between news department head Max Schumacher and Diana Christensen, Director of Programming, has been somewhat shortened. However, the stage presentation has been theatricalized by turning the stage into an actual closed circuit television studio with the control booth on stage left and a restaurant and bar on stage right where assorted audience members are served a three-course meal as they watch the action ringside. 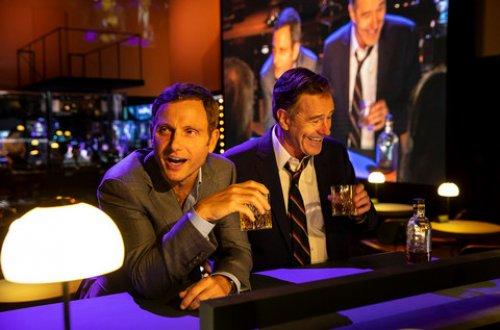 Howard Beale, a 25-year veteran anchorman for United Broadcasting System, who has become an alcoholic since his wife died three years before, has been fired by his boss and best friend Max, head of news, as his ratings began slipping badly. As the news department’s deficit is $32 million annually, Max has no choice. Howard goes on the air and announces that he will kill himself on national television in one week’s time. He is instantly terminated by UBS but Max goes to bat for him to make a farewell speech rescuing his reputation on the following night.

However, when Howard begins questioning television as well as the life we lead, his ratings spike and the network decides to continue with his nightly rants. When Max decides to terminate Howard’s angry man ramblings, Diana Christensen, Director of Programming, gets the network executives to run the show as part of her entertainment division and Howard is given his own show. Becoming a “latter day prophet, denouncing the hypocrisies of our time,” Howard gets audiences to yell, “We’re mad as hell, and we’re not going to take it anymore.” By now he is being seen by 60 million people nightly and has the highest rated show on television, a big money maker for the network pulling it out of its slump.

Howard’s doom is lain when he discovers that Communication Corporation of American (CCA) which bought out UBS ten months earlier is about to be acquired by an international conglomerate, and he asks the public to send telegrams to the White House to stop the takeover. Unfortunately for him, CCA is billions in debt and desperately needs this infusion of money. Beale is called into the office of the head of UBS, Mr. Jensen, and unwittingly becomes his pawn. This leads to his ultimate destruction. Along the way Diana develops such reality shows as The Vigilante Hour and The Terror Hour, and begins an affair with Max who is a married man. 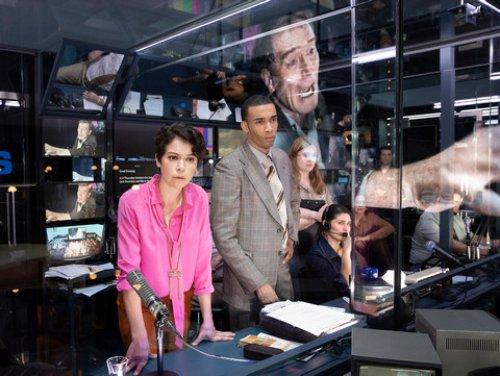 Cranston is so completely Howard Beale that it is hard to know where the characterization ends and the actor begins. He is required to do everything from begin a partial, aborted striptease, to breakdown on camera, join the audience and converse with them, and eventually hear supernatural voices, all of which is entirely convincing. In a role that won the late Peter Finch his Academy Award for Best Actor, Cranston gives a big performance which rightly dominates the play. For the London production, he has already garnered the 2018 Olivier Award for Best Actor in a Play, a richly deserved accolade.

Under the circumstances he may be forgiven for putting all of the other actors in eclipse though as company men and women they don’t have a great deal of leeway to emote. As Max Schumacher, the role played by William Holden in the film, Tony Goldwyn is rather bland as Howard’s middle-aged boss who is equally in a midlife crisis though Goldwyn may simply be too young to play the world weariness. As Diana Christensen, Director of Entertainment Programming, (the Faye Dunaway role), Tatiana Maslany is efficient, conniving and ambitious, but without the sensuality that was Dunaway’s stock in trade. Joshua Boone, Ron Canada, Julian Elijah Martinez and Frank Wood blur as network executives who have to react to events which are all too similar.

However, at 6 foot, 5 inches, the tallest one on stage, Nick Wyman as the Head of UBS is commanding in his one scene from a high platform educating Howard Beale below on the economics of world business. In the role that won Beatrice Straight an Oscar for five minutes of screen time, Alyssa Bresnahan as Louise Schumacher makes the same lines scorch as she tells her adulterous husband what she is no longer willing to put up with as his wife of 25 years. 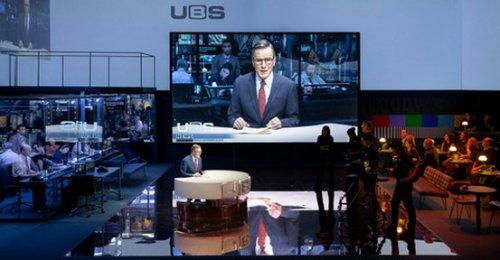 In his ninth staging of a famous film script, van Hove’s direction is like that of an engineer in charge of a huge well-oiled machine, all the parts working in sync to keep the whole engine running at an ever-increasing hum. His use of continual streaming video is much more effective here than it was in his stage version of Visconti’s The Damned and possibly more effective than his four-hour The Fountainhead, from Ayn Rand’s novel, both of which played in New York in the past year. His actors also work as a well-organized team so that they are believable as corporate executives putting out a product daily. His use of the audience both on stage and as the studio audience out front gives the play a cinéma vérite feel in which we are caught up in a group experience. Unlike his experimental work on Arthur Miller’s A View from the Bridge and The Crucible, he isn’t so much avant-garde as working to place a text in a new medium.

Aside from Versweyveld’s working studio set, with rolling video cameras at various vantage points, the design also includes television monitors both in the audience and on stage. The largest one allow us to see the network broadcasting both news and commercials, and Yarden’s video design is seamlessly put to the best use such work has ever been seen on Broadway. Versweyveld’s subtle lighting shifts time and scenes almost without your noticing it. Eric Sleichim’s sound and music also adds to the general ambiance of a working studio. The costumes by An D’Huys are exactly right for the many corporate types in the days before dress-down Fridays.

Not only does Network contain this year’s best performance by an actor, the play offers media advice from 1976 which still resonates today: “First rule of news. You do not become the news,” “the American people want someone to articulate their rage for them,” and “I know historically news divisions are expected to lose money but to our minds this philosophy is a wanton fiscal affront to be resolutely resisted.” A riveting production by Ivo van Hove and his team of theater artists, Network is scarily relevant and you will probably never think of television news the same way ever again.