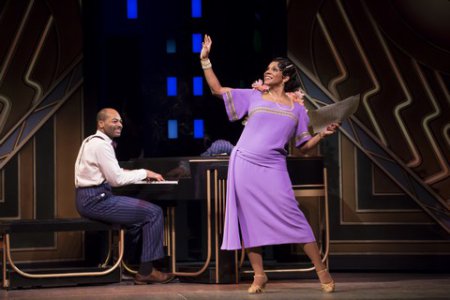 Brandon Victor Dixon and Audra McDonald in a scene from “Shuffle Along…” (Photo credit: Julieta Cervantes)

Shuffle Along, or the Making of the Musical Sensation of 1921 and All the Followed is one fabulously extravagant lecture-demonstration.   If a spoon full of sugar makes the medicine go down, then thirty-two bars of brilliant tap dancing and soulful songs make the many lessons of Shuffle Along a joyful learning experience.  Witnessing the struggles and victories of the principal characters in Shuffle Along is exciting, not to mention mind-bogglingly entertaining.

Shuffle Along follows the travails and triumphs of the creators of the 1921 David that fought what was at first a losing battle against the Goliath of the Broadway powers-that-be.  The quartet that put the show together on a long road tour were libretto creators F.E. Miller (Brian Stokes Mitchell whose charisma and mind-boggling professionalism makes his character the safe harbor) and his partner, Aubrey Lyles (Arbender Robinson, brilliantly taking on the part usually played by Billy Porter); composer, Noble Sissle (Joshua Henry, giving a quietly dignified performance as an artist whose disappointment in America takes him to Africa) and lyricist, Eubie Blake (Brandon Victor Dixon, the more effervescent and demanding of the two songwriters).

They gather the crème-de-la-crème of black artists for their show, including the vivacious and egotistic Lottie Gee (Darlesia Cearcy, taking on the part created by Audra McDonald with verve, passion and clarity); Gertrude Saunders and Florence Mills, two ingenue types played by sweet-voiced Adrienne Warren who surprises with her creation of two slyly powerful figures who give Lottie Gee a run for her money.

The Harmony Kings, the close-harmony singing-dancing quartet provide much of the singing.  Played by Darius de Haas, JC Montgomery, Arbender Robinson and Christian Dante White, their presence provides a binding running theme to the show and they are great.

Brooks Ashmanskas takes on all the awful, underhanded white characters who variously screwed, robbed and disappointed the creators of the show.  If he hadn’t been such a consummate actor/singer/dancer, he would have been booed off the stage for his deliciously evil machinations which include pulling the funding out from under the show, racially bigoted criticism (as writer Carl Van Vechten) and abandoning the show’s creators when they most needed support. 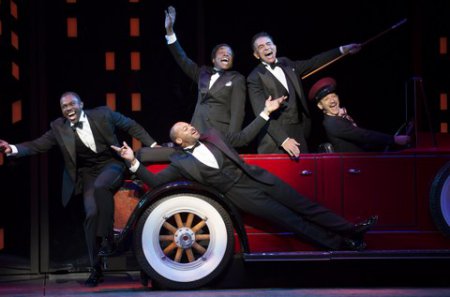 The first act is the story of the creation of Shuffle Along, a happy collision of talents whose patience is severely tested by logistics and egos as the show goes through a long, arduous gestation tour which eventually led to the opening in an out of the way Broadway house.

The second act take the story on its inevitable sad course of entropy of all concerned who never again had that lightning strike of success hit them.  Racial discrimination, the Depression and intramural battles doomed them all to go on their separate ways with varying degrees of accomplishment.

The collaboration of George C. Wolfe (director) and the choreographer, Savion Glover(who famously paired for Bring in Da Noise Bring in Da Funk) is inspired, although even they and their craft can’t quite relieve the heavy-handed storyline and moralizing.  They bring to light the depressing fact that even talented black performers still had to perform in blackface and had to suffer the indignities of being plagiarized.

The choreography is simply superb, not only re-creating the era’s cheery virtuosity, but giving it a fresh, contemporary spin, performed by an expert, youthful cast.  Mr. Wolfe’s libretto, shuffled into Miller and Lyles’ original, involves a great deal of fourth wall breaking.  The pacing is interrupted by chatter and observations and we never get to see enough of the original show and its songs to appreciate why it succeeded.  Contemporary evidence indicates that the revue style play with a storyline concerning the election of a mayor, was slight even by 1920’s standards, so, perhaps, the creative team’s choice to blow through the bits and pieces of the show at warp speed may be a good idea.

The scenery (Santo Loquasto) and costuming (Ann Roth) are brilliant, turning backstage scenes into full-fledged numbers in the blink of an eye.  Even the suits that the four creators wear communicate who they are, not to mention the brilliant costumes and gowns for the other principals and chorus members. 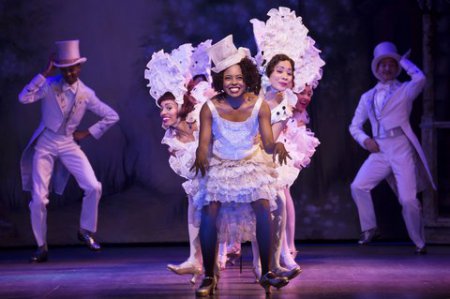 The wigs and hair design by Mia M. Neal are integral to establishing the period and characters’ individuality.

The lighting by Jules Fisher and Peggy Eisenhauer makes the most of the sets and costumes and enhances the many moods of the show from depression to jubilation.

Finally, the songs of Sissle and Blake, which include “Broadway Blues,” “I’m Simply Full of Jazz,” “Ain’t It a Shame,” “Shuffle Along,” and its biggest hit, “I’m Just Wild About Harry,” run the gamut from torchy to bluesy to jazzy to pop and are used with great skill by Wolfe and Glover.  The wit, sensuality and overall brilliance of the music and lyrics is astonishing, particularly how fresh and meaningful they still are.

Shuffle Along, or the Making of the Musical Sensation of 1921 and All That Followed