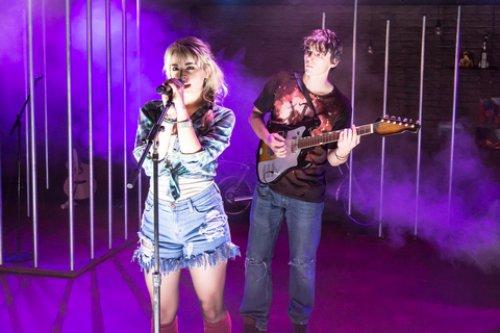 Sydney Shepherd and Adrian Blake Enscoe in a scene from “Billy and the Killers” (Photo credit: Shira Friedman)

In their new rock musical Billy and the Killers, lyricist/librettist Jim Shankman and composer Peter Stopschinski channel Nicholas Ray, David Lynch, Elvis Presley, and Dashiell Hammett to concoct a muddled tale of teenage rebellion that dead-ends in an even less coherent murder trial. Along the way, there are some well-performed songs whose lyrics seem to be tied to the plot, but it’s often hard to tell, since, as you probably already know, proper enunciation is not what rock ‘n’ roll is all about, man.

As the eponymous Billy, Adrian Blake Enscoe decently acts the part of a hyper-literate high schooler desperate to tell the world about his morbid, if ultimately harmless, obsessions. Essentially, Billy is a knockoff of one of those benignly disaffected characters Elvis used to play in movies like Jailhouse Rock and Roustabout, where a supremely innocent face becomes a license to say dangerous things without ever coming off as dangerous. In other words, if he’s not locked up for some contrived reason, Billy is the perfect angry young man to bring home to your parents. 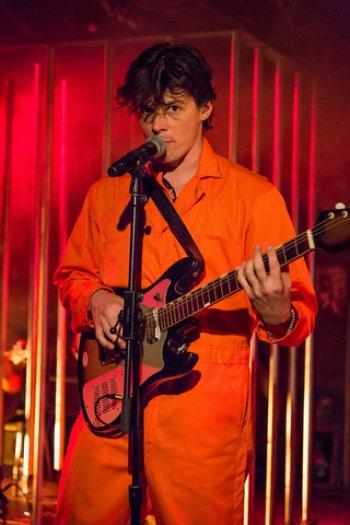 Adrian Blake Enscoe in a scene from “Billy and the Killers” (Photo credit: Shira Friedman)

Electric guitar in hand, Enscoe’s first appearance is, in fact, in an orange jumpsuit, tearing through the show’s opening song, the infectious “Rockabilly Prison.” He is joined onstage for the number by the rest of the cast, also in convict’s garb, and an energetic band, tucked away into the corners of Margaux Maeght’s grungy, catchall set. It’s a lot of fun and if Billy and the Killers were only a concert, it might continue to be a lot of fun. But, unfortunately, Shankman’s book keeps intruding to communicate its deeper thoughts.

You see, Billy’s intense focus on death and other existential concerns has alienated him from his teachers and most of his fellow students. The lone exception is Nell (Sydney Shepherd), a kohl-eyed hellraiser, who is turned on by the brooding boy from the wrong side of the tracks. Unfortunately, the chemistry between Billy and Nell is mostly angst-deep. Their relationship only generates sparks when Enscoe and Shepherd are warbling the incomprehensible score. Apparently, nothing is better for the two young actors’ performances than being liberated from the show’s words.

It also does wonders for director Craig J. George and the rest of the crew, who collectively seem much more engaged whenever the music starts up. In particular, Cha See’s lighting turns wonderfully frenetic, and slightly demonic, with the actors at the mikes. And whoever is working the fog machine goes overboard in a way that can only make you smile. 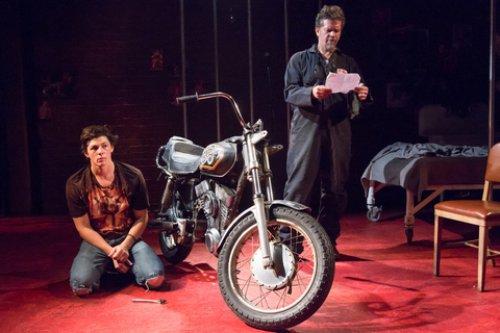 Adrian Blake Enscoe and Tom O’Keefe in a scene from “Billy and the Killers” (Photo credit: Shira Friedman)

But then the music stops, the dialogue returns, and it’s back to dullsville, with Shankman’s nonlinear story mostly vacillating between the insipid and the inane. Although one part does cover both bases: the explanation for why Billy is in that orange jumpsuit. It seems a detective (Paul Sadlik) thinks he killed someone, and neither Billy’s ex-con father (Tom O’Keefe) nor his shifty lawyer (Sean McDermott) can prove him innocent, at least not until a groan-inducing deception is revealed.

Shankman wants this thoroughly underbaked plotline to carry not only the musical’s dramatic weight but also his larger intellectual agenda, noting in a press release that he was inspired to write Billy and the Killers after coming across a news story that made him think about “the suspicion of the artist in society.” Sure, okay, though it should be mentioned that part of the reason Billy is in jail stems from the fact that he drew a picture of the victim using the victim’s own blood. I don’t know about you, but I think that’s pretty suspicious.