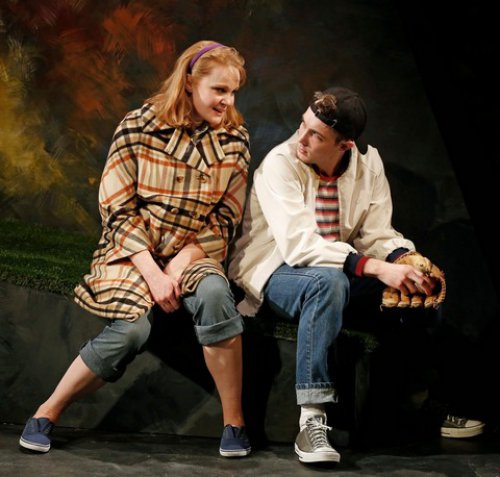 John & Jen is a 1995 chamber musical by Andrew Lippa (music) and Tom Greenwald (lyrics), with the book credited to both. The story follows Jen (Kate Baldwin, radiant as ever) from youth to middle age, first in her relationship to her brother John (Conor Ryan) in Act 1, and then later her son John (Ryan again) in Act 2. It’s essentially a song cycle, with very little dialogue and almost no action, and it’s essentially tragic, though the authors do give Jen a happy ending. (This isn’t a spoiler: the dramatic tension is not whether the relationship issues will be resolved, but how.)

Although it may seem counter-intuitive, it’s harder to tell a full-length story using two people than one. Going solo gives you the option of an omniscient narrator, while two characters require showing every plot point from both sides. And from the composer’s point of view, it’s difficult to present contending sentiments simultaneously, or even in realistically rapid alternation.

John & Jen (the apostrophe is canonical) addresses this with the two-John device, which forces us to stay aware of the structure of the story, in turn inviting us to consider that both narrators are equally unreliable. (A variation on this approach is taken by Jason Robert Brown’s popular The Last Five Years, which tells a conventional boy-meets-girl story using two alternating timelines: hers runs backwards, his forwards.)

The story begins in 1950, with five-year-old Jen singing to her newborn sibling, and follows them growing up together. To this is added the contaminant of an abusive father, who yells at their mother and hits John. Ten-year-old Jen swears to protect him, and we understand that somehow she does, but eventually she’s eighteen and leaves for college. Adolescent John feels resentful, abandoned and angry. Jen protests the Vietnam War, marries a draft evader and moves to Canada to start a family; John emulates their father’s tough-guy stance and announces he’s going to enlist. They fight, and fail to reconcile before he leaves for good.

Act 2 takes up not long after, with Jen addressing her newborn son John. Her crushing feelings of guilt about her brother’s fate play out in her relationship with her child, the first sign of trouble coming when she inappropriately demands he use his uncle’s old baseball mitt rather than a new one of his own. It’s a “sins of the father” story, so little John naturally rebels against her smothering, and the question of Act 2 is how Jen will pull their relationship out of this tailspin. 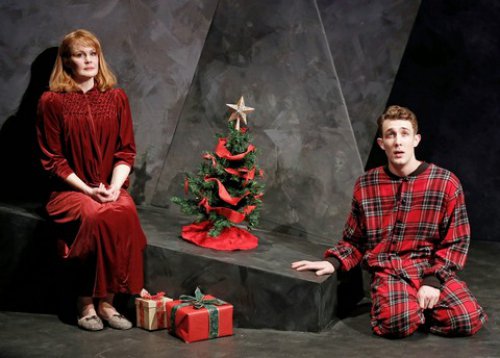 This story invites and receives all kinds of parallel situations. For example, an Act 1 montage (showing the growth of the antiwar movement), is echoed in an Act 2 “talk show” montage (showing the growing alienation between mother and son). The risk of making the scaffolding so obvious, however, is that the characters’ behavior sometimes feels determined more by the precompositional plan than by the truths of human interaction. For example, there are moments in Act 2 where Jen’s hovering mothering is ridiculously exaggerated less to make a satiric or dramatic point than to fill out the symmetry of the framework.

The authors seem to be aware of this problem, as they’ve made a positive change for this new production. A sporting parallel in the original (basketball in Act 1, baseball in Act 2) has been jettisoned, and the Act 1 spot has been replaced with a new song (“Trouble with Men”), which is very funny and in fact one of the best numbers here. The music for this show, Lippa’s first, already evidences his trademark lyricism and his superb ear for text-setting.

Conor Ryan is a lively young actor with a fine voice, and he does an excellent job of playing zero-to-nineteen twice over as variations on a theme. Baldwin’s Jen ages from five to forty-four, and not always gracefully, but the gracelessness is always the character’s and not Baldwin’s. It’s particularly wonderful to see her work in such an intimate setting, and the touching moments drew more than a few audible sniffles.

As mentioned, John & Jen has very little dialog and almost no action that isn’t described in the lyrics, so it’s only fair to point out that it probably delivers as much on recording or in concert as it does here. That said, this production directed by Jonathan Silverstein with musical staging by Christine O’Grady is unfussy and effective. Scenic designer Steven C. Kemp provides a few static pieces which function as bed, hillside, or fence as needed, and it’s a credit to all that their changing roles are never unclear. Given the small playing area, the nicely varied lighting by Josh Bradford helped much in avoiding monotony.

Pianist and music director Lily Ling was joined by Melanie Mason on cello, with both playing the occasional percussion instrument. Their sound was lovely and never overpowered the actors.