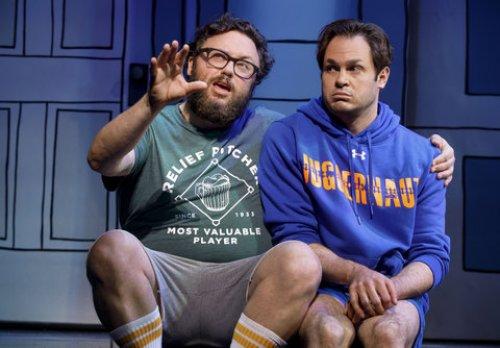 Jay Klaitz and Mitchell Jarvis in a scene from “Gettin’ the Band Back Together” (Photo credit: Joan Marcus)

The new musical Gettin’ the Band Back Together begins with a statement from “The Host,” a sort of warm-up guy/emcee, that the show is a rare thing on Broadway these days: “a totally original musical.” However, this statement belies the fact that the show is both generic and clichéd, borrowing pieces of much more successful shows such as The Full Monty, School of Rock, Bandstand, Groundhog Day, The Wedding Singer, and going all the way back to Bye Bye Birdie.  It also offers a preshow of classic rock songs with the word “band” in the title, which only draws attention to the fact that Mark Allen’s songs for this show are not in that league.

If the show plays like it was written by a committee, in fact, it has been. The book is by producer/ writer Ken Davenport and The Grundleshotz who turn out to be a group of performers and writers who originally workshopped the show in a series of improvised rehearsals. For the record, they are Sebastian Arcelus, Fred Berman, Michael Hirstreet, Jenna Coker Jones, Craig Jorczak, Nathan Kaufman, Emily McNamara, Jennifer Miller, Bhavesh Patel, Sarah Saltzberg (who is credited with additional material), Michael Tester, as well as Jay Klaitz who plays the second male lead in the show, Bart Vickers as though he were auditioning for Dewey, the laid-back music teacher in School of Rock.

All this notwithstanding, the performers are game, the ensemble energetic, and the second act has a great many solo ballads that develop the characters that remain ciphers in the first half and are quite touching. The show also brings television, screen and stage star Marilu Henner (Grease, Taxi, Dancing with the Stars) back to Broadway and, not surprisingly, she is the most authentic performer in the show. Getting’ the Band Back Together premiered at New Brunswick’s George Street Playhouse in 2013 and five of the lead actors have transferred with the show to Broadway, including Mitchell Jarvis as the show’s hero.  John Rando, who staged The Wedding Singer, the most recent revival of On the Town, and won the Tony Award for Urinetown, has again directed the show but not solved all of its problems. 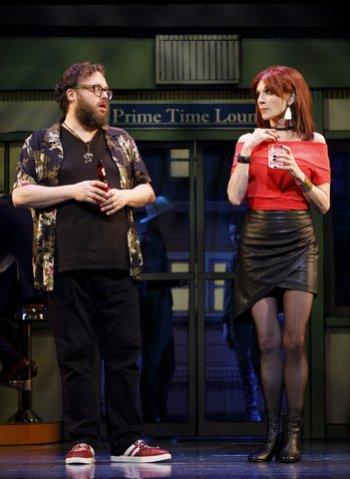 Jay Klaitz and Marilu Henner in a scene from “Gettin’ the Band Back Together” (Photo credit: Joan Marcus)

Jarvis plays Mitch Papadopoulos who is fired from his stockbroker job on his 40th birthday.  Broke, he leaves New York and returns home to his mother Sharon (the still sexy and shapely Henner) in Sayreville, New Jersey, “former home of Jon Bon Jovi and Greg Evigan from My Two Dads” where he runs into his best friend Bart (Klaitz), now a disgruntled math teacher at the local high school and still single as is Mitch. Mitch’s most memorable moment was when his band won the local Battle of the Bands in the Western Eastern Middlesex County contest 20 years before and the nostalgic Bart suggests that they get their band Juggernaut back together.

Mitch isn’t interested until thuggish, musclebound Tygen Billows (the delightfully entertaining Brandon Williams who gets all of his laughs) of the band Mouthfeel, now a landlord owning 73 % of the real estate in Sayreville, puts up a foreclosure sign in front of both Sharon and Bart’s homes. Tygen who lost to Juggernaut 20 years ago now dares Mitch to a rematch in the next annual contest a week away. Seeing a way out of his problems, Mitch agrees to enter the Battle of the Bands but makes a deal with Ty that if Juggernaut wins both his mother and Bart get to keep their houses. If they lose, Tygen not only gets the houses but the trophy that Juggernaut won almost two decades ago and which he has been lusting after all these many years.

Mitch’s new problem is that the other band members aren’t too interested: former drummer Sully Sullivan (Paul Whitty) is a policeman and studying to take his detective exam for the fourth time and Rummesh “Robbie” Patel (Manu Narayan) is now a dermatologist under the thumb of his father Dr. Patel, Sr., and about to get married to a woman he has never met in an arranged marriage. But the real problem is that lead guitarist Kenny Caimpa has died two years ago. The guys hold an audition and come up with one of Bart’s failing math students, 16-year-old Ricky Bling (the sensationally talented Sawyer Nunes) who talks in jive and rap but is a terrific guitarist. Can the guys win the contest with only one week to prepare plus Tygen’s meddling? Only time will tell. Joe Perry (actor uncredited) of the band Aerosmith makes a few surprise appearances and the ending includes a deus ex machina only seen in made-for-television movies and sitcoms. 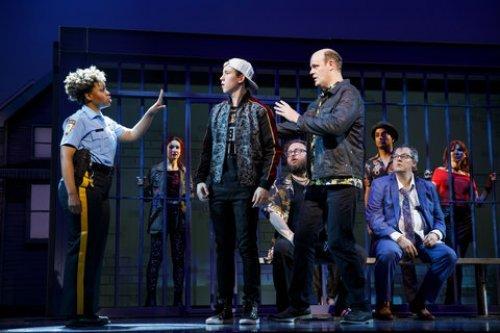 Along the way, Mitch meets up with his former high school girlfriend Dani, a personal trainer, who is now dating Tygen, Sully is smitten with fellow officer Roxanne Velasco with whom he is studying, Robbie falls head over heels for beautiful Tawney Truebody who shows up for the audition and loves Indian food, and Ricky is taken with Dani’s daughter, his classmate Billie, a young rebel-without-a-cause, just like he is.

The first half of Allen’s score is made up of fairly forgettable anthems with familiar sounding titles and themes, “Jersey,” “One of Those Guys,” “Best Day of My Life,” etc., with rhymes of mostly one syllable – even though the characters all have careers that require college degrees. Jarvis’ Mitch is rather colorless, although this is offset by Broadway and musical veteran Henner who isn’t used half enough and brings a ray of credibility to the proceedings.

Several of the running gags like the Drunken Guy’s periodic appearances and Tygen’s entourage of dim-witted followers who complete his sentences pall pretty quickly.  The biggest laugh of the evening is on Billie’s complaint to her overly protective mother, “Where am I, North Korea?,” which is the level of the show’s humor. Emily Rebholz’s costumes are only memorable for Tygen and his followers which are always campy and droll. And much of Derek McLane’s two-dimensional scenic designs look cartoon-inspired. 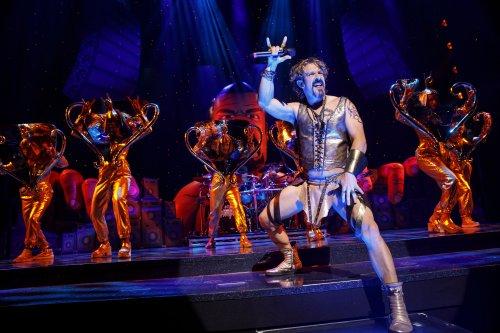 Brandon Williams (center) and the cast of “Getting’ the Band Back Together” (Photo credit: Joan Marcus)

And then in the second act, it all comes together. The main characters, who were mainly cardboard and undefined until then, suddenly are each given a ballad in which they describe their desires and dreams and the show comes into its own. Ricky who turns out to be Jewish creates a dynamic rap in “Hava Nagila,” at Juggernaut’s first reunion gig, which turns out to be an Orthodox wedding and he steals the show. Lounge singer Nick Styler (played by the uncredited Ryan Duncan, the only one to realize that he is in a satire of sorts) performs a witty song, “Second Chances,” at the Peterpank Diner where the band and their women all go to celebrate their first success. Dani, (the sweet Becca Kötte, subbing for the regular Kelli Barrett), gets to review her life in the poignant, “I Just Want Real.” Sully serenades Roxy with the metaphoric, “Life Without Parole.” And Bart gets to tell Mitch his big secret in “Bart’s Confession” which leads to new complications.

Chris Bailey’s choreography which seemed scattershot and banal in the first act, picks up personality in the second half and offers the dynamic musical staging for Tygen’s over-the-top Mouthfeel contest song, complete with sound and light effects, and the enthusiastic dancing at the Orthodox wedding in “Hava Nagila.” Juggernaut’s contest song, “Do Over,” brings home the message of the show that it is never too late to change. There it is: a new musical with a crazy premise (how many guys can wait 20 years to successfully restart their high school rock bands in one week?), a formulaic first act, and a second half which finally gets its act together.

For tickets, call 212-239-6200 or visit http://www.gettinthebandbacktogether.com