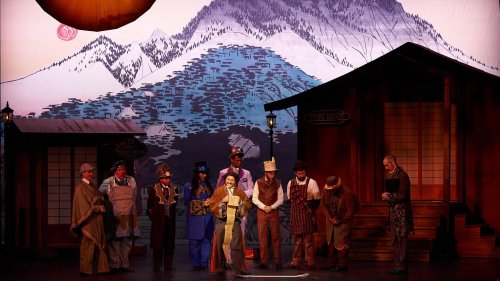 “My morals have been declared politically correct,” the title character of W.S. Gilbert and Arthur Sullivan’s The Mikado sings in the New York Gilbert & Sullivan Players’ updated rendition of the operetta (a version first staged by NYGASP in 2016). Gilbert’s original lyric was “…declared particularly correct.” This was one of several lines and lyrics updated in response to concerns from members of the Asian-American community about the show’s racial insensitivities, which seem pretty much irrefutable. This line, though, seems to point to the company’s due diligence in dealing with the matter.

David Auxier, who has directed and choreographed this iteration, also wrote a prologue to address objections to the use of non-Asian performers in Japanese roles. The added scenes focus on Gilbert and Sullivan’s creation of the operetta, which debuted in London in 1885. Set in the offices of the D’Oyly Carte Opera Company, the scenes depict Gilbert (Auxier), Sullivan (David Macaluso), and impresario Richard D’Oyly Carte (Matthew Wages), who contemplate what the next G&S show will be. The writing team also looks at the contents of a large trunkful of Japanese artifacts. (This story material will be familiar to those who know Mike Leigh’s wonderful 1999 film, Topsy-Turvy.)

The framing device is not a completely elegant solution to the problem, but it gets the job done. Gilbert gets knocked out cold while examining the contents of the trunk. While incapacitated, he imagines the members of the company playing the roles that he and Sullivan will eventually create. In this fantasy Mikado, the citizens of the town of Titipu are more British townsfolk than Japanese villagers. They dress in bright Victorian-era costumes by Quinto Ott. The set by Anshuman Bhatia includes a railway depot from which the characters who have arrived in town emerge (giving a multiple meaning to the lyric “Comes a train of little ladies…”). The cast consists of actors of various racial backgrounds.

Most viewers who see this show will likely be familiar with the comedic plot, which centers on Nanki-Poo (John Charles McLaughlin), the disguised son of the Mikado (David Wannen, also NYGASP’s executive producer). Nanki-Poo is in love with Yum-Yum (Sarah Caldwell Smith), the ward and fiancée of Ko-Ko (Macaluso), a local tailor who has become Titipu’s Lord High Executioner. When the Mikado insists from afar that Ko-Ko do his job and behead someone, a scheme is hatched whereby Nanki-Poo will enjoy marriage with Yum-Yum for a month, after which he’ll be decapitated. Ko-Ko will then wed the demure yet sprightly young widow. Complications ensue with the arrival of Katisha (Cáitlin Burke), the older woman to whom Nanki-Poo was betrothed before he fled his father’s court. At the end of Act I, she storms out, threatening vengeance. In the second act, she returns with the Mikado himself in tow. 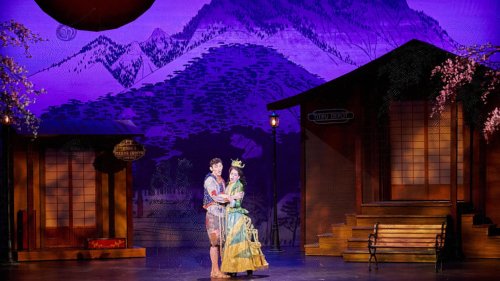 Despite all the problems our era has with The Mikado, there are many fine things in what has, over the decades, been the favorite among the G&S comic operas. Not the least is Sullivan’s gorgeous, timeless music, which is lush and varied. Unfortunately, there is a lot of slowly unspooling exposition in the first act, accented with some truly groan-worthy puns and other hoary gags: jokes that were likely stale by the last years of the 19th century.

The fallout from these drawbacks lands particularly hard on Wages, who portrays the born-sneering Pooh-Bah, Lord High Everything Else. The running gag about this bribe-hungry character is that he has taken over every governmental position in town except executioner, along with each officeholder’s salary. Wages works hard—maybe, too hard—to imbue each of Pooh-Bah’s multiple roles with a different vocal characterization. He seems to have decided to go full-tilt hambone actor, with mixed results. Fortunately, he has a robust and resounding singing voice, which ameliorates the problem to a large degree.

As for Ko-Ko, arguably the show’s starring role, the likable Macaluso delivers a performance with some fine moments but a lack of continuity. On opening night, he seemed still to be exploring various aspects of the part. Sometimes he ratcheted up the comedic side of the character and other times he played the role a bit straighter. Like Wages, he fares better in Act II, especially in his scenes with the excellent Burke as Katisha. As a team, these two do great work, and Macaluso’s rendition of the funny/tender ballad “Willow, Tit Willow” is terrific.

McLaughlin and Smith are fine as the young lovers. Their duet “Were You Not to Ko-Ko Plighted,” with its rapid-fire kissing shtick, comes off well. Smith’s big second-act solo, “The Sun Whose Rays Are All Ablaze,” is another highlight. She’s aided here by lighting designer Benjamin Weill, who bathes the stage in yellow light during the first verse, then softy transitions to nocturnal hues as Yum-Yum turns her attention from sun to moon. Another outstanding number is “Brightly Dawns Our Wedding Day,” the intermittently a cappella madrigal number sung by Yum-Yum and Nanki-Poo, along with Pish-Tush (Auxier) and Pitti-Sing (Amy Maude Helfer). Rebecca L. Hargrove, as Peep-Bo, has the least to do among the principal players, but she makes hay in her few key moments. 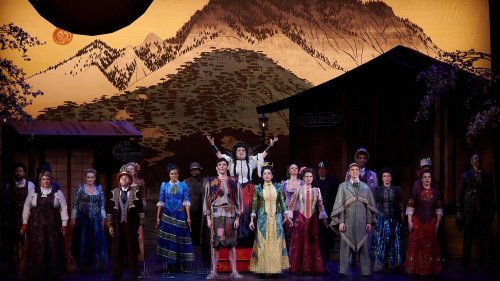 The Mikado’s big Act II entrance is worth waiting for here. NYGASP favorite Wannen reaches the deep bass notes of the role easily, and he is appropriately imperious in a comedic way. He’ll likely be even better once Ott—or someone— fixes the Mikado’s spiky gold-dragon headdress so that it doesn’t keep slipping down and obscuring the actor’s face.

The production’s ensemble members sing (and frequently dance or otherwise move about) with enthusiasm, and the sizable orchestra, conducted on opening night by music director Albert Bergeret, rises to the occasion. At some performances, associate conductor Joseph Rubin will take the baton.

Not all of the emendations that Auxier and company have made to the libretto and lyrics here have been enacted for reasons of political correctness. Following the long tradition of Gilbert & Sullivan adaptation, the company here has altered dialogue and some songs (notably those of Ko-Ko and the Mikado) to take aim at contemporary sociopolitical and pop-culture targets. Among the anachronistic gags here are references to PayPal, the obsession with hashtags in social media, and Democratic presidential candidate Tulsi Gabbard. The production tiptoes around the most likely of targets in 2019-20 America, although there is reference to Attorney General William Barr. The tiptoeing actually becomes part of the fun, and the jab at the White House comes off slyly but sharply.

The Kaye Playhouse at Hunter College, 695 Park Avenue at 68th Street, in Manhattan